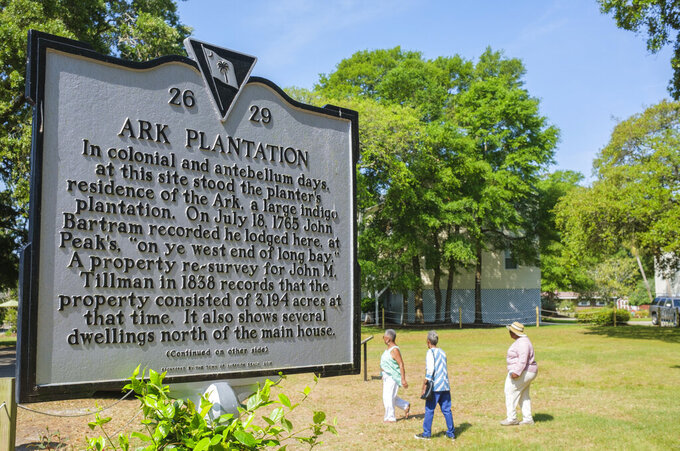 SURFSIDE BEACH, S.C. (AP) — When Gerry Thompson recently purchased his new home in Surfside Beach, he was missing a critical piece of information.

The home had been built on a cemetery where enslaved people from a nearby plantation and their descendants had been buried.

“I’m kind of gobsmacked that this was part of that cemetery,” he said. “I feel bad about it. I wish there had never been houses built on here, personally.”

The cemetery that Thompson’s and his neighbors’ homes sit on top of was part of the former Ark Plantation, a nearly 3,200 acre slave plantation where owner John Tillman grew indigo — a purplish-blue colored plant used to make dyes — that he shipped to Europe.

Several dozen enslaved Africans — 63 as of an 1860 survey — worked and lived on the Ark Plantation and historians believe scores of people could be buried in the cemetery. Official death records exist for around 60 people.

Now, Surfside Beach is honoring that part of the town’s history.

On May 3, town officials, local historians and members of the Surfside Beach Historical Society unveiled a series of historical markers and informational plaques detailing the land’s history.

“This is something we’ve been working on for a long time and it’s a good feeling to see that it’s here and it’s presented in such a way that it’s going to be remembered,” said Cad Holmes, an Horry County resident who works as an amateur historian. Holmes is also a newly-elected member of the historical society.

“It’s our legacy,” Holmes added. “History is something that shouldn’t be swept under the rug.”

BURIALS AT THE ARK CEMETERY

Enslaved people working and living at the Ark Plantation, for generations, were buried near the plantation house. It’s not known how many people are buried there, but Holmes said he’s found death certificates for more than 60 people. Forty-nine of those people are named on a plaque at the site, including Sabe Rutledge, who Holmes is descended from.

Rutledge lived at least part of his early life on the plantation, Holmes said.

Holmes explained that identifying the people buried was difficult because few of the graves were marked, and death certificates he was able to find only date back to the mid-1800s.

Holmes, on one of the historical markers, described Rutledge’s funeral in 1952, in which family members followed a “mule driven wagon” carrying Rutledge’s casket. Holmes attended the funeral as a child.

“(Rutledge’s) desire to be buried there was also prompted by earlier generation’s local Gullah belief, ‘If you were buried by water flowing into the ocean your soul could find its way back to Africa,’” the marker reads. “We still remember the crying and the singing of the people.”

The historical markers note that traditions of the Gullah Geechee people, who were formerly enslaved along the coasts of the Carolinas and Georgia, would have people buried with personal belongings and marked graves with broken glass or other light-reflecting materials.

The traditions, Holmes explained, called for buried people to face East and be near water so that their souls could return to Africa.

Some of the burials, according to Joyce Suliman, are as shallow as 12 inches. Suliman helped coordinate the historical markers and herself owns a home that was built on top of the cemetery.

The cemetery was used for burials up through the 1950s and was “very active,” she said. After discovering that her home was built atop the cemetery, Suliman said she worked with Horry County officials to run a ground-penetrating radar over her backyard and other areas to locate the burials.

It’s not clear when the homes were originally built on the cemetery as Horry County land records for the area only date back to the late 1980s.

Robert Blomquist, a spokesperson for Surfside Beach, said the town couldn’t immediately comment on when the homes were first built, and couldn’t comment on why they were built on the site.

“The Town cannot speak to the decisions of the past, we can only look to the future,” Blomquist said. “We’re proud and thankful for all the Surfside Beach Historical Society has done to identify areas of historical significance in our Town.”

Suliman said that as she advocated for Surfside Beach to officially recognize the cemetery she butted heads with locals and builders.

“I think this is truly what the general public needed to see because we had a lot of conflict with people believing this was a burial ground,” she said. “In fact, if looks could kill, I would have been dead ten times over.”

Suliman said her next goal is for Surfside Beach to dedicate the two historical sites as a park so that the historical society can apply for grants and build a gazebo.

WHAT HAPPENED AT THE ARK PLANTATION?

Sitting behind a large sand dune meant to protect it from storms, the Ark Plantation house was a large wooden building erected sometime before the mid-1700s.

After Elisha Tillman died in 1824, his son, John Tillman, took over the plantation and ran it until his death in 1865.

The plantation originally grew indigo which Holmes said was often shipped to Europe for use in clothes and uniforms.

After emancipation, Holmes said, freed slaves made their way to the Freewoods, Burgess and Holmestown Road area of Horry County. Some of the former slaves traveled up the Waccamaw River to Darlington, Holmes said, and some returned to Horry County after the Civil War ended.

Those formerly enslaved people, Holmes said, set about making the water-logged land they managed to purchase into farmable land. For generations, Holmes said, Black families farmed in the Burgess area, acquiring more land as they could. That legacy today is carried on by a handful of Black farmers who still grow crops on inherited and acquired land in the area.

Holmes’ ancestors worked and lived on the Ark Plantation, including Rutledge, who he referred to as an uncle.

Rutledge and his father, Holmes said, worked as overseers on the plantation. He said he suspects that Tillman may have been Rutledge’s father, though he doesn’t have concrete proof.

After emancipation, Holmes said Black people weren’t welcome in the Surfside Beach area. He recalled that Black residents could only fish in the area after dark.

“The only time we could come down here was to fish, we couldn’t go on the beach,” he said.

The Ark Plantation house was later used as an inn for travelers.

Suliman said the markers were necessary to inform residents of the history of their town. She wishes she could have intervened sooner.

“It was a shame we could not preserve it,” she said.

“I’m a Christian, I pray they Rest In Peace and have peace because I think that’s terrible,” he said. “It’s terrible to put houses over graves.”