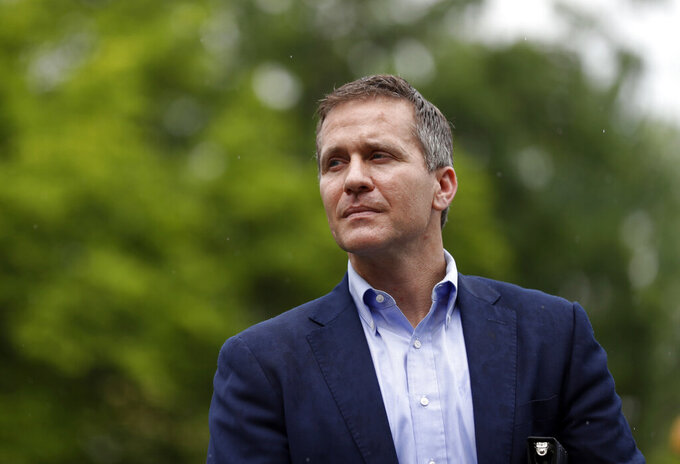 The Campaign Legal Center, a Washington-based nonprofit, filed its complaint with the Missouri Ethics Commission against Greitens, who resigned in 2018 amid a sex scandal and other claims of campaign finance misconduct. He's running in a crowded Republican primary for Blunt's seat.

In October, the nonprofit filed a complaint over the spending with the Federal Elections Commission. Greitens’ Senate campaign has said that “no gubernatorial campaign funds were used for the Senate campaign” in response to the FEC complaint.

The latest complaint claims that Greitens' state committee didn't properly report the spending to the Missouri Ethics Commission as an in-kind contribution to the federal committee.

“It violated both state and federal law for Greitens to spend $100,000 in gubernatorial campaign funds on his U.S. Senate race without proper disclosure,” Brendan Fischer, the nonprofit's director of federal reform, said in a statement. “Missouri voters have a right to know where the money being spent to influence their votes is coming from.”

Greitens' Senate campaign manager, Dylan Johnson, said in a statement that the team “will seek damages for these libelous claims.”

“No funds from prior campaigns have been used in the Senate race," Johnson said.

If the latest claims against Greitens are true, his state committee is at risk of violating a 2020 consent order with the Missouri Ethics Commission that stemmed from a campaign finance violation during his 2016 gubernatorial run.

In February 2020, the ethics commission found “probable cause” that Greitens' state committee failed to report a donor list from his charity for his 2016 political campaign and issued a $178,000 fine, though it required payment of just $38,000.

The consent order said Greitens' campaign would owe the rest if it committed any more violations between then and February 2022.