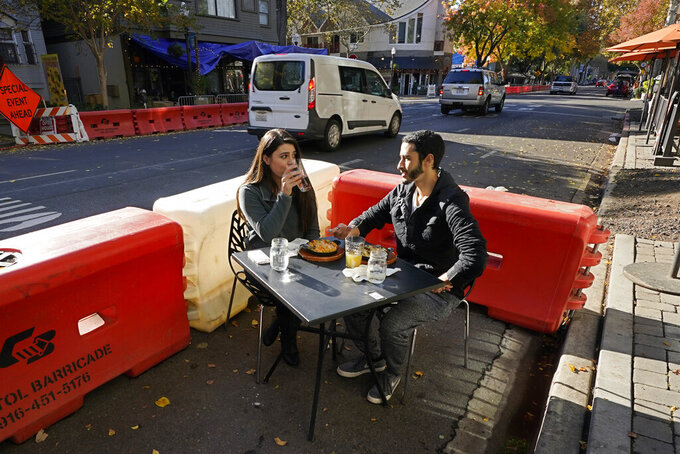 SACRAMENTO, Calif. (AP) — California moved Friday to extend the sale of cocktails-to-go and keep alcohol service for outdoor dining at parklets as officials try to help restaurants recover from the coronavirus pandemic.

“This is a pathway for these businesses to frankly make up for a lot of the constraints that have been imposed upon them over the course of the last 18 months,” Gov. Gavin Newsom said as he signed the three bills into law at a community restaurant in Oakland.

Two of the three bills extend outdoor dining permits and alcohol sales at the pandemic-era parklets for a year after the state of emergency ends, giving businesses time to seek permission for permanent approval.

"The road to restaurant recovery will be a very long one and the importance of these measures taken together will remain a critical part of helping restaurants get back on their feet, reemploy massive numbers of Californians, and continue to safely serve the public,” California Restaurant Association CEO and President Jot Condie said in a statement.

Adam Smith, vice president of state government relations for the Distilled Spirits Council of the United States, said the move will support hospitality businesses devastated by the pandemic.

At least 35 states allowed restaurants or bars to sell cocktails to-go during the pandemic, he said. Sixteen states and the District of Columbia have since made that permanent, while 15 other states like California continued it temporarily.

Newsom signed the bills at Oakland's Kingston 11 restaurant, where owner Nigel Jones said sales plummeted 70% at the start of the pandemic mainly because of lost alcohol sales.

“We are excited about the future," Jones said, though "it’s still very difficult as we move forward.”

Newsom got his start as a wine entrepreneur, though his wineries and other businesses are now in a blind trust.

He said in response to questioning that state and local officials must still enforce responsible alcohol consumption, but that the laws are more restrictive than his earlier executive orders. They include requiring accompanying food and allow for pickup but not delivery, Newsom said.

Assemblyman Jesse Gabriel, who authored one of the bills, said six of 10 restaurants in California are owned by by people of color, whom he noted have been hit harder than others in the pandemic.

Sen. Scott Wiener, the author of another bill, said the temporary measures were “a lifeline to restaurants and bars" during the pandemic.

Wiener, of San Francisco, said the new laws “step back and say, you know, we did this thing quickly during the pandemic, and as big a catastrophe as this pandemic was, let’s take the good that we learned during this emergency and make it permanent.”