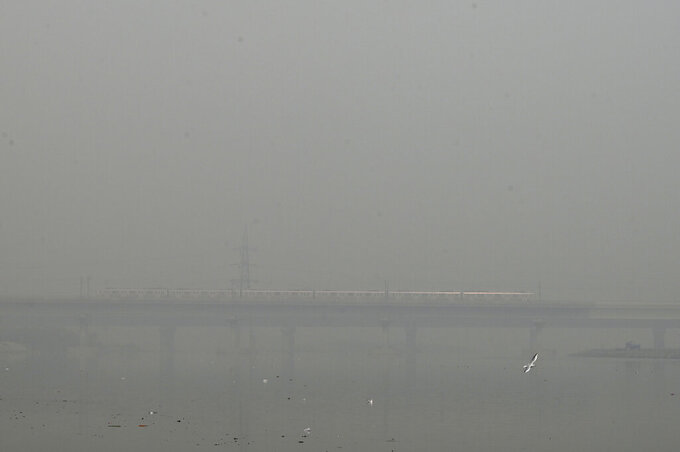 The Delhi government closed primary schools and restricted outdoor activity for older students as the air quality index exceeded 470, considered “severe” and more than 10 times the global safety threshold, according to the state-run Central Pollution Control Board.

In NOIDA, short for New Okhla Industrial Development Authority, a city on the outskirts of New Delhi, schools shifted to online classes up to the eighth grade to meet the public health crisis.

The haze enveloped monuments and high-rise buildings in and around New Delhi.

India's Environment Minister Bhupender Yadav blamed the northern Punjab state, ruled by the opposition Aam Admi Party, for its failure to stop the burning of crop residues, a key contributor to the pollution, at the start of the winter wheat-sowing season.

"There is no doubt over who has turned Delhi into a gas chamber," Yadav tweeted on Wednesday.

The state's top elected official, Bhagwant Mann, defended himself by saying that his government took office only six months ago and that the federal and state governments needed to tackle the pollution crisis together.

Sarvjeet Singh, a 48-year-old autorickshaw driver, said the smog was hurting his eyes and he was finding it difficult to breathe. "There are problems, especially in the morning. It’s difficult to drive my vehicle because of the pollution. My autorickshaw is open. It will affect us more than people in cars. We have to work, what can we do?”

Rahul Azmera, 29, a software engineer who works in the United States and is visiting New Delhi with his parents, said, “I feel like if I stay here for one month, I would be hospitalized, definitely. That would scare me a lot.”

A full closure of schools, colleges, educational institutions and non-emergency commercial activities, and a restriction on private vehicles, is being considered in case the pollution level does not come down this weekend, a government statement said late Thursday.

The government advised children, the elderly and those with respiratory, cardiovascular and other health problems to avoid outdoor activities and stay indoors as much as possible.

New Delhi tops the list almost every year among the many Indian cities gasping for breath after the Diwali festival celebrations with their massive lighting of firecrackers. The crisis is exacerbated particularly in the winter when the burning of crop residues in neighboring states coincides with cooler temperatures that trap deadly smoke. That smoke travels to New Delhi, leading to a surge in pollution in the city of more than 20 million people.

The government ban on construction and demolition activities includes projects such as highways, roads, flyovers, overhead bridges, power transmission and pipelines. The government also asked authorities in the Indian capital region covering New Delhi and parts of Haryana and Uttar Pradesh states to decide whether to allow public, municipal and private offices to work at 50% strength and ask others to work from home.

The federal government also is considering whether to permit work from home for its offices.

It said the overall air quality in New Delhi is likely to remain in the "severe" or “very severe” categories until Saturday. An Environment Ministry review will be held on Monday.

Emissions from industries with no pollution control technology and coal, which helps produce most of the country’s electricity, have been linked to bad air quality in other urban areas.

Prime Minister Narendra Modi has said the country will aim to stop adding greenhouse gases to the atmosphere by 2070 — two decades after the U.S. and at least 10 years later than China.