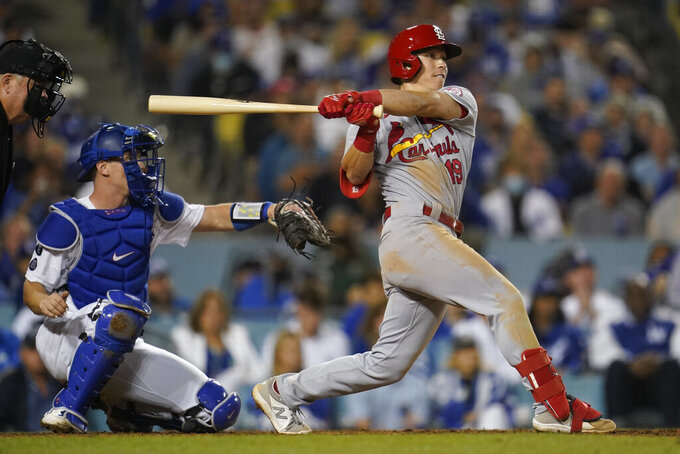 It took the biggest winning streak in franchise history to get the St. Louis Cardinals into the playoffs.

It took one swing of the bat to end their season.

Now, after the Dodgers' Chris Taylor hit a walk-off homer in the ninth inning of the NL wild-card game, Los Angeles is headed into the divisional round of the playoffs and the Cardinals are headed into the offseason.

“I felt like we had a team that was going to win the World Series, honestly,” said Adam Wainwright, their 40-year-old star pitcher who allowed one run while pitching into the sixth inning in the 3-1 loss.

That the Cardinals were even playing Wednesday night was a victory of sorts. They went 10-17 in June and had been derailed by injuries at just about every position. The future of manager Mike Shildt was starting to come into question. And with aging players such as Wainwright and Yadier Molina, the questions began on whether it was time to rebuild.

Then came that 17-game charge in September that changed everything. The Cardinals roared past the fading Padres and easily won the second wild-card spot but fell just short against the Dodgers.

“This team didn’t come here just to play, this team came here to win and move on and take down our 12th world championship,” Shildt said. "That was the investment of our group since day one of spring training, so it hurts.”

Now, rather than rebuild, the Cardinals could have the band back together next year. Wainwright already has agreed to a contract for next season as has his longtime battery mate Molina, and most of the rest of the roster will return.

The most loaded position on the market is shortstop, and the Cardinals just happen to need one after leaning on Edmundo Sosa this season. But whether they can afford Corey Seager, Trevor Story or Carlos Baez remains to be seen. The answer could come from within should Nolan Gorman prove in spring training he's ready for the job.

If there were any questions about Shildt’s job status, they were answered during the September run. He seemed to make all the right moves, navigating both injuries and his pitching staff to guide the Cardinals to their third straight postseason berth.

Wainwright will be joined by Miles Mikolas, Jack Flaherty and Dakoda Hudson in the rotation next season, but there are questions when it comes to the other two spots. Alex Reyes would like to start rather than close out games, and Jordan Hicks is also an option. Matthew Liberatore could be the most intriguing candidate, providing the elite prospect shows enough in spring training to warrant the job right away rather than waiting at Triple-A Memphis.

HEY, I KNOW YOU

Might the Cardinals wade into free agency to land another starting pitcher? If so, perhaps they take a run at Max Scherzer, who will hit free agency once the Dodgers' playoff run is over. He grew up in the St. Louis suburb of Chesterfield and played his college ball at Missouri.