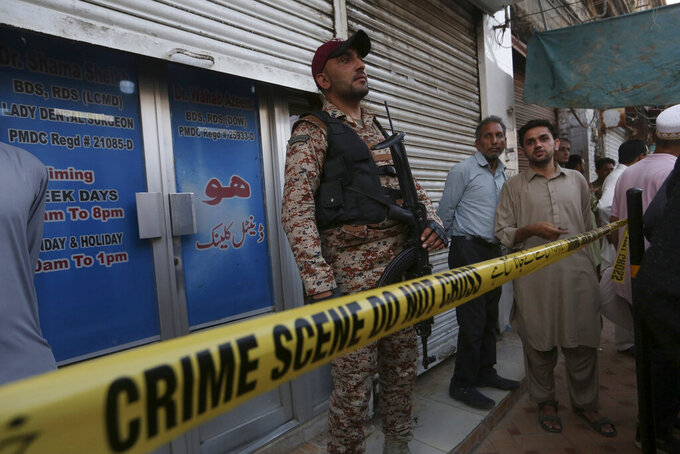 Fareed Khan, ASSOCIATED PRESS
A paramilitary soldier stands guard outside a dental clinic after a firing incident, in Karachi, Pakistan, Wednesday, Sept. 28, 2022. A gunman shot and killed a dual national Chinese-Pakistani man in an attack at a dental clinic in the southern port city of Karachi on Wednesday before fleeing the scene, police said. (AP Photo/Fareed Khan)

KARACHI, Pakistan (AP) — A gunman posing as a dental patient shot and killed a dual national Chinese-Pakistani man working in a dental clinic in the southern Pakistani port city of Karachi on Wednesday before fleeing the scene, police said.

A Chinese couple running the clinic was wounded in the attack, which took place in the city's Sadar neighborhood, said police official Asad Raza. Police identified the victim as Ronald Raymond Chou and the couple as Dr. Richard Hu and Margaret Hu.

He said the couple was in stable condition at a hospital.

Sharjeel Memon Kharal, the deputy inspector-general of police in Karachi, said it was a targeted killing. “So far as per the initial investigation, this (dental) clinic was singled out and targeted."

He said a lone gunman was involved in the attack and that officers were investigating.

Thousands of Chinese people live and work in Pakistan, with most of them involved in Beijing’s multibillion-dollar infrastructure project connecting south and central Asia with the Chinese capital.

A key road linking Pakistan’s southern port of Gwadar, in southwestern Baluchistan province, with China’s northwest Xinjiang province, is part of what is known as the China-Pakistan Economic Corridor.

The BLA opposes Chinese investment in the province as it believes Beijing is exploiting the area's resources without giving locals anything.

In April, an explosion ripped through a van inside a Karachi university campus, killing three Chinese nationals and their Pakistani driver. This attack was claimed by the BLA, which said a female suicide bomber had targeted the Chinese and warned of more such attacks.

China condemned this attack and asked Pakistan to enhance security for its nationals.

In a statement, Pakistan’s Interior Minister Rana Sanaullah condemned Wednesday's shooting, saying “such incidents are intolerable.” He ordered police to ensure the arrest of the attacker as soon as possible.

Baluchistan has long been the scene of a low-level insurgency by armed groups demanding more autonomy and a greater share of the region’s natural resources if not outright independence from Pakistan.

In some cases, the Pakistani Taliban have also targeted the Chinese.