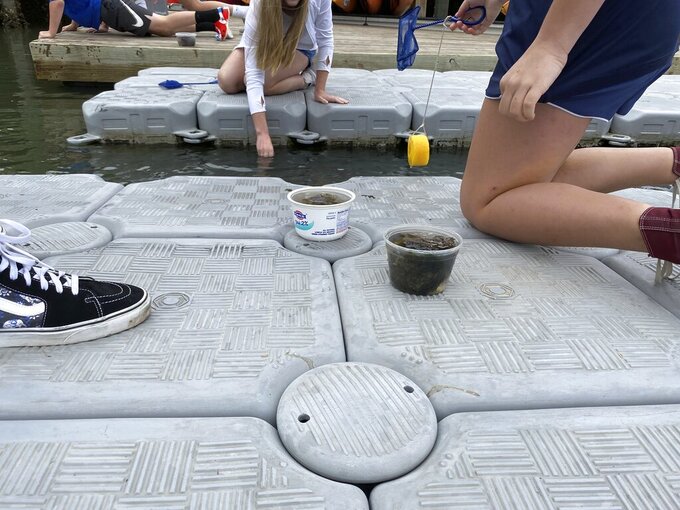 Maybe a challenge for some. And a test of patience for others. But leading swaths of life jacket-clad students — fueled with field trip exuberance and teenage wit — tandem kayaking out of Shelter Cove Marina was a typical spring day for Jean Fruh and Outside Foundation volunteers.

And it’s one she wishes every Beaufort County student had.

Started by two science teachers 20 years ago, Fruh, a lifelong educator and Outside Foundation executive director, built up the program Kids in Kayaks eight years ago. Since then, Fruh and foundation volunteers have taken out over 1,000 Beaufort County students each year from seven or eight local schools.

It’s not just about getting out of a school chair and paddling to one’s heart’s content. The program instructs students on local habitat and ecology, teaching them about everything from water pollution to oysters’ ecological importance. Fruh said it’s about exposure, connecting abstract concepts by using all the senses and making sure every student gets outside to understand where they live.

“Our environment is everything for these kids. The jobs will go, the economy will go, if we don’t protect our waters,” Fruh said. “If you want them to protect this, you have to let them love it.”

And love it they did.

WHAT’S IN YOUR BACKYARD?

“I’d smoke you,” Langhals, paired in a kayak with one of his students, joked.

The two forged ahead, cruising by salt marshes and winding estuaries, as Langhals, close behind, watched the afternoon unfold onto Broad Creek.

Half of his 42 seventh graders were on the water after lunch. The others were dockside, rotating through stations, some of which required them to carefully lie on their bellies onto the dock to scoop water into containers for testing and specimen retrieval.

About a quarter of science teacher Tamara Davis’ students have never lived near the east coast, she said. Some coming from Denver and others from Chicago. Her classroom is like a proverbial melting pot of geographical backgrounds.

Davis has been part of the program for about 15 years when her own children went through it, back when two science teachers launched it.

“They need to understand what’s in their backyards,” Davis said.

And for her seventh graders that entails kayaking.

For some, it was their first time putting paddle to water. Fruh estimated only about half of the Kids in Kayaks students have been kayaking, despite living on or near Hilton Head Island. She added that tourists have a higher chance of kayaking than the children who live in Beaufort County.

Tyler Young, 14, had kayaked once before. But he navigated out of Shelter Cove Marina with ease and speed like he’d done it forever.

He wasn’t shy, answering questions such as: What is pluff mud made from? What does it mean that oysters are filter feeders? What happens to shellfish beds when they are polluted?

“It’s different in person,” Tyler said. “You can see the size of it.”

The waterway, which flows into Calibogue Sound, runs for miles through Hilton Head like an artery, nearly dividing the island in half and offering everything from kayaking to critical saltwater marsh and a habitat for endangered species. It has, by many, been referred to as the island’s “most significant and most vulnerable natural resource.” One worth protecting.

Young learned about the Lowcountry’s vital salt marshes, teeming with Spartina grass and full of briny oyster shells, in the classroom with Davis, but Outside Foundation volunteers made the teachings come alive a different way.

“(Spartina) is a freshwater plant, so how’s it living in saltwater?” Leslie Bennett posed to over a dozen seventh graders from her single kayak. “How come it’s not dead?”

“Filter!” another student called out.

The grass takes the salt water up though its root system, filtering and desalinating it, then secretes the salt crystals through specialized cells in the leaves.

And that’s how the teachings went as dozens of seventh graders paddled just outside of Shelter Cove Marina, learning about the symbiosis among salt marshes, beaches and wildlife on Hilton Head Island.

Back at the dock, students were on land understanding their environmental footprint.

One group tested the water’s salinity. Simply, one student dipped his finger into the water and took a quick lick “Salty!” he replied. More wary students looked through a refractometer — a tool used to gauge concentrations of substances in liquids — in this case saltwater — for testing.

Others laid on their bodies across the floating dock, scraping what they could from the bottom of docks to identify living specimens, such as tiny snails.

“It’s so slimy,” said 13-year-old Lucy Reese, who pulled a chunk of matter from under the dock and tossed it into a plastic container full of water.

From there, students pulled apart the masses to identify what was living inside of them. But Lucy’s favorite station was a lesson in water pollution, where Ellen Sturup Comeau used a model town, sprinkles and Kool Aid to drive home the point.

All answers were correct. An oil spill being point source pollution — a single, identifiable source. Whereas littering and animal waste serve as contributors to nonpoint source pollution. Both made worse by more impervious surfaces, ones that don’t absorb the pollution before it runs off into nearby waterways.

One of the biggest contributors on the island?

“Poop,” Lucy said quietly for another student who didn’t want to give the answer.

The most recent data available in a plan for Broad Creek watershed estimated there were over 1,800 dogs on Hilton Head Island in 2016. One dog produces about 274 pounds of waste each year, according to the Environmental Protection Agency. If every canine-owning island resident refused to pick up after their pet, about 500,000 pounds of droppings would sit, waiting to end up in the watershed.

Sturup Comeau demonstrated this with brown sprinkles poured onto the model town. On top of that were rainbow sprinkles to show litter and pesticides. Then, seven students squeezed water onto the model, letting the “freshwater” fall onto the pollution sources and collect in the model waterway.

“Would you swim in that?” Sturup Comeau asked.

Tyler nodded with a smile.

“You’d swim in poop, pesticide and trash-laden water? You’re braver than me,” she said.

Bravery aside, pollution on the island, if it becomes uncontrolled, can shutter shellfish beds and trigger no-swim warnings. And the solution, in many cases, can be as easy as picking up trash and after pets.

For Lucy, seeing a blatant demonstration of pollution made her more aware of how she can help. The only student in her seven-person group, Lucy lives with her family on the water and is used to fishing, being out on a boat and kayaking on the May River.

But it was her first time taking on the Broad Creek. She feels similarly to Fruh, without talking one-on-one, grasping that the mission to learn about the environment around them isn’t reserved for only seventh graders.

“Everybody needs to understand,” Lucy said. “The more help, there can be a bigger impact.”