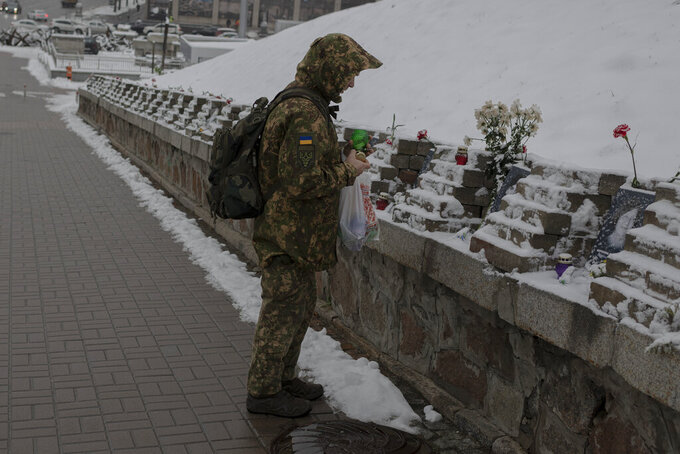 Andrew Kravchenko, ASSOCIATED PRESS
A Ukrainian serviceman lights a candle at a memorial dedicated to people who died in clashes with security forces, at the Independent Square (Maidan) in Kyiv, Ukraine, Monday, Nov. 21, 2022. People gathered to commemorate the Maidan protest movement and the events which took place in late Feb. 2014 that led to the departure of former Ukrainian President Victor Yanukovich and the formation of a new government. (AP Photo/Andrew Kravchenko)

KYIV, Ukraine (AP) — Ukrainian authorities have begun evacuating civilians from recently liberated sections of the Kherson and Mykolaiv regions, fearing that a lack of heat, power and water due to Russian shelling will make living conditions too difficult this winter. The World Health Organization concurred, warning that millions face a “life-threatening” winter in Ukraine.

Authorities urged residents of the two southern regions, which Russian forces have been shelling for months, to move to safer areas in the central and and western parts of the country. Ukrainian Deputy Prime Minister Iryna Vereshchuk said Monday that the government will provide transportation, accommodations and medical care for them, with priority for women with children, the sick and elderly.

Vereshchuk last month asked citizens now living abroad not to return to Ukraine for the winter to conserve power. Other officials have suggested that residents in Kyiv or elsewhere who have the resources to leave Ukraine for a few months should do so, to save power for hospitals and other key facilities.

The WHO delivered a chilling warning Monday about the energy crisis' human impact on Ukraine.

“This winter will be life-threatening for millions of people in Ukraine,” said the WHO’s regional director for Europe, Dr. Hans Henri P. Kluge. “Attacks on health and energy infrastructure mean hundreds of hospitals and healthcare facilities are no longer fully operational, lacking fuel, water and electricity.”

He warned of health risks such as respiratory and cardiovascular problems from people trying to warm themselves by burning charcoal or wood and using diesel generators and electric heaters.

The evacuations are taking place more than a week after Ukraine recaptured the city of Kherson, on the western bank of the Dnieper River, and surrounding areas in a major battlefield gain. Since then, heading into the winter, residents and authorities alike are realizing how much power and other infrastructure the Russians damaged or destroyed before retreating.

Ukraine is known for its brutal winter weather, and snow has already covered Kyiv, the capital, and other parts of the country.

Russian forces are fortifying their defense lines along Dnieper River's eastern bank, fearing that Ukrainian forces will push deeper into the region. In the weeks before Ukraine's successful counteroffensive, Russian-installed authorities relocated tens of thousands of Kherson city residents to Russian-held areas.

Russia has been pounding Ukraine’s power grid and other infrastructure from the air for weeks, causing widespread blackouts and leaving millions of Ukrainians without electricity, heat and water.

Zelenskyy on Monday repeated his calls for NATO nations and other allies to recognize Russia as a terrorist state, saying its shelling of energy facilities was tantamount “to the use of a weapon of mass destruction.” Zelenskyy also again urged stricter sanctions against Russia and appealed for more air defense aid.

“The terrorist state needs to see that they do not stand a chance,” he told NATO’s 68th Parliamentary Assembly meeting in Madrid in a video address, after which he said the body approved the terrorist designation.

Also Monday, Zelenskyy and his wife made a rare joint public appearance to observe a moment of silence and place candles at a Kyiv memorial for those killed in Ukraine's pro-European Union mass protests in 2014. As bells rang in a memorial tribute, Ukraine's first couple walked under a gray sky on streets dusted with snow and ice up to a wall of stone plaques bearing the names of fallen protesters.

Their visit coincided with fresh reminders Monday of more death and destruction on Ukrainian soil.

At least four civilians were killed and eight more wounded in Ukraine over the past 24 hours, the deputy head of the country’s presidential office, Kyrylo Tymoshenko, said Monday.

A Russian missile strike in the northeast Kharkiv region on Sunday night killed one person and wounded two as it hit a residential building in the village of Shevchenkove, according to the region's governor.

One person was wounded in the Dnipropetrovsk region, where Russian forces shelled the city of Nikopol and surrounding areas, Gov. Valentyn Reznichenko said. Nikopol lies across the river from the Zaporizhzhia nuclear plant.

Heavy fighting was taking place near the Ukrainian-held city of Bakhmut, where a school was damaged. In Makiivka, which is under Russian control, an oil depot was hit and caught fire.

Russian-installed authorities said more than 105,000 people in the province’s capital, Donetsk, were left without electricity on Monday after Ukrainian shelling damaged power lines. One person was killed, officials said, and 59 miners were trapped underground after power was cut to four coal mines.

In the neighboring Luhansk region, most of which is under Russian control, the Ukrainian army is advancing towards the key cities of Kreminna and Svatove, where the Russians have set up a defense line, according to Luhansk’s Ukrainian Gov. Serhiy Haidai.

“There are successes and the Ukrainian army is moving very slowly, but it will be much more difficult for Russians to defend themselves after Svatove and Kreminna (are retaken)," Haidai told Ukrainian television.

Britain's Defense Ministry said retaining control of Svatove should be a political priority for Russia but that “both Russian defensive and offensive capability continues to be hampered by severe shortages of munitions and skilled personnel.”

In another development, the U.N.'s International Atomic Energy Agency said its inspectors on Monday reported that weekend shelling of the Zaporizhzhia nuclear power plant, Europe’s largest, had not damaged key equipment and they had identified no nuclear safety concerns.

The six reactors, which are all shut down, are stable, and the integrity of spent and fresh fuel, along with stored radioactive waste, was confirmed, the IAEA said, adding that staff are repairing damage to other equipment.

As they have for months, Kyiv and Moscow blamed each other for the shelling of the Russian-occupied power station, and again the IAEA didn't comment on who was responsible.

Follow all AP stories about the war in Ukraine at https://apnews.com/hub/russia-ukraine.