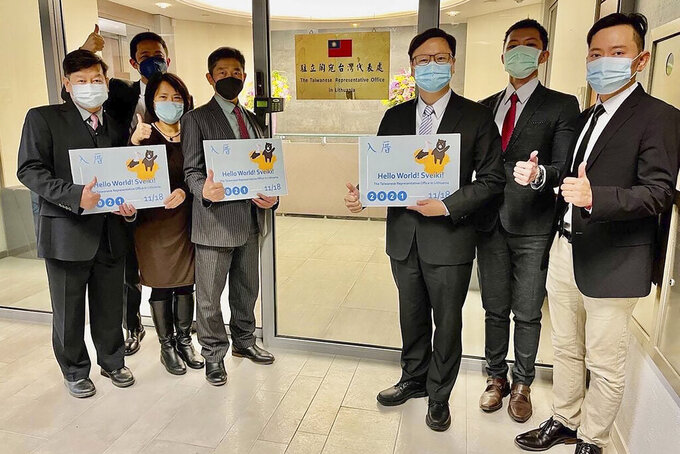 Uncredited, ASSOCIATED PRESS
In this photo released by the Taiwan Ministry of Foreign Affairs, Eric Huang, newly appointed director to the representative office, third from right, poses with other staffers outside the Taiwan Representative Office in Vilinius, Lithuania on Thursday, Nov. 18, 2021. Taiwan opened the representation office in Lithuania's capital Vilnius Thursday, in a move set to anger Beijing. (Taiwan Ministry of Foreign Affairs via AP)

The self-governing island and Lithuania agreed in July that the Vilnius office would bear the name Taiwan rather than Chinese Taipei — a term often used in other countries in order not to offend Beijing.

China says Taiwan is part of its territory and doesn’t have the right to diplomatic recognition, although the island maintains informal ties with all major nations through trade offices that act as de facto embassies, including in the United States and Japan. Chinese pressure has reduced Taiwan’s formal diplomatic allies to just 15.

“We seek closer relations with the entire Asian and the Indian-Pacific Ocean region. Lithuania opened an embassy in Australia recently, another one will open in South Korea, and also probably a representation office in Taipei in the future,” Lithuanian Foreign Minister Gabrielius Landsbergis told reporters on Thursday

No reaction has yet been received from China, according to Landsbergis.

Plans to open the Taiwan office in Vilnius led China this summer to recall its ambassador from Vilnius and demand that Lithuania withdraw its envoy to Beijing.