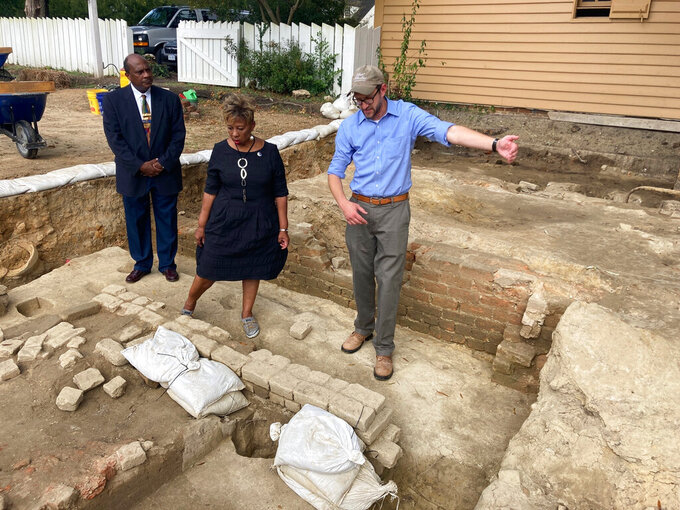 Ben Finley, ASSOCIATED PRESS
FILE - Reginald F. Davis, from left, pastor of First Baptist Church, Connie Matthews Harshaw, a member of First Baptist, and Jack Gary, Colonial Williamsburg's director of archaeology, stand at the brick-and-mortar foundation of one the oldest Black churches in the U.S. on Oct. 6, 2021, in Williamsburg, Va. Archaeologists in Virginia began excavating three suspected graves at the site on Monday, July 18, 2022, commencing a months-long effort to learn who was buried there and how they lived. (AP Photo/Ben Finley, File)

Archaeologists in Virginia began excavating three suspected graves at the original site of one of the nation's oldest Black churches on Monday, commencing a monthslong effort to learn who was buried there and how they lived.

The First Baptist Church was formed in 1776 by free and enslaved Black people in Williamsburg, the colonial capital of Virginia. Members initially met secretly in fields and under trees in defiance of laws that prevented African Americans from congregating.

A total of 41 apparent burial plots have been identified. Most are 4 to 6 feet (1.2 to 1.8 meters) long and up to 2 feet (0.61 meters) wide. The soil is discolored in places where holes were likely dug and filled back in. Only one grave appears to be marked, with an upside-down empty wine bottle.

Before excavations began Monday, a private blessing was held.

“It was important for us to have that ceremony — to bless the ancestors,” said Connie Matthews Harshaw, a church member and board president of a foundation that preserves First Baptist's history. “Because we don’t know their names. Their names are known only to God.”

First Baptist's original church was destroyed by a tornado in 1834. The second structure, built in 1856, stood there for a century. That building was bought in 1956 and razed to build a parking lot for Colonial Williamsburg, a living history museum that was expanding at the time and that now has more than 400 structures.

For decades, the museum failed to tell the stories of colonial Black Americans — many of them enslaved — who made up more than half of the 2,000 people in Virginia's 18th century capital. But in recent years it has made an effort to tell a more complete story, placing a growing emphasis on African-American history.

When the church's original structure was uncovered last year, First Baptist Pastor Reginald F. Davis said it was “a rediscovery of the humanity of a people.”

“This helps to erase the historical and social amnesia that has afflicted this country for so many years,” he said.

If human remains are found in the plots that are being targeted, DNA tests and analyses of bones will be conducted, said Jack Gary, Colonial Williamsburg’s director of archaeology.

DNA analysis should be able to determine the person's eye color and skin tone as well as propensity for certain diseases and genomic ancestry. Analysis of bones can show a person's age when he or she died as well as their quality of life and the physical stresses they endured, Gary said.

The remains will be taken to the Institute for Historical Biology on the campus of William & Mary, a university in Williamsburg, for cleaning and bone analysis. The University of Connecticut will conduct the DNA testing.

Church members eventually want to submit DNA to determine familial links with those who are buried there. The human remains will eventually be reinterred.

“I would say that by the late 1800s or early 1900s, they had stopped burying people there and it started to fade from memory,” Gary said.

The suspected burial plots were a surprise for many, said Harshaw, a member of First Baptist. But some older congregants had long believed descendants were buried there based on stories passed through the generations.

"When your grandmother tells you something, normally you can count on it,” Harshaw said.