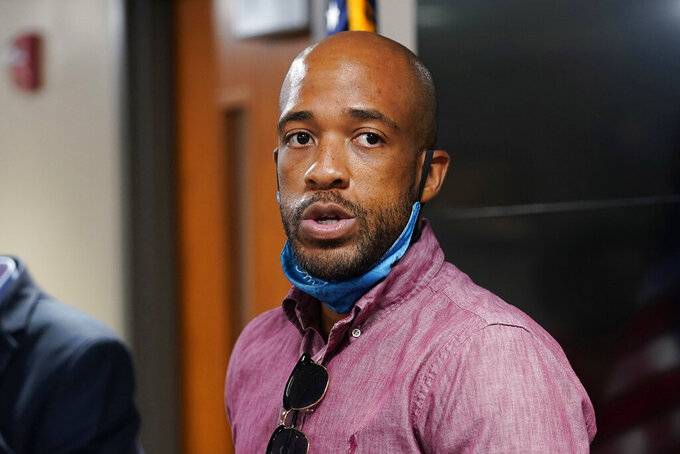 Morry Gash, ASSOCIATED PRESS
FILE - in this Aug. 27, 2020, file photo, Wisconsin Lt. Gov. Mandela Barnes speaks during a news conference in Kenosha, Wis. Lt. Gov. Wisconsin Democrats looking to unseat Republican Sen. Ron Johnson largely focused their attacks on him Sunday, June 26, 2022 and not each other, as each of the eight candidates make their case to party activists at the state convention held six weeks before the primary. (AP Photo/Morry Gash. File)

MADISON, Wis. (AP) — Wisconsin Democrats looking to unseat Republican Sen. Ron Johnson focused their attacks on him Sunday, and not each other, as the eight candidates made their case to party activists at the state convention held six weeks before the primary.

The Democratic Senate candidates blasted Johnson for his attempt to deliver fake Republican Electoral College ballots to then-Vice President Mike Pence on Jan. 6, 2021, his skepticism over COVID-19 vaccines, his voting for a tax law that benefited him, and his support for overturning Roe v. Wade.

The race in Wisconsin, which Donald Trump carried in 2016 but President Joe Biden won in 2020, could determine which party control the Senate. Polls show a tight Democratic primary between Lt. Gov. Mandela Barnes and Alex Lasry, who is on leave from his job as an executive for the Milwaukee Bucks.

Barnes highlighted his upbringing in a “hard working union household” in Milwaukee and contrasted that with Johnson, who is a millionaire and former owner of a plastics company.

“It feels like the deck is stacked against us,” Barnes said at the convention in La Crosse. “We don’t want a hand out, we just want a fair shot. And we know we will never get that fair shot as long as Ron Johnson is in the Senate.”

Lasry, a millionaire, touted his union support, his work to build the Fiserv Forum where the Bucks play and his role getting the Democratic National Convention to be in Milwaukee in 2020. He also contrasted himself with Johnson and blasted him for not fighting to persuade Oshkosh Defense to locate 1,000 jobs in Wisconsin rather than South Carolina.

Godlewski, the only woman in the race, said she would work to pass a law legalizing abortion now that the Supreme Court has overturned Roe v. Wade.

“If we had more Democratic women at that U.S. Senate table, we would have gotten this done a long time ago,” Godlewski said.

Nelson, who has tried to run a humor-infused, folksy campaign similar to former Sen. Russ Feingold’s first bid for office 30 years ago, had some of the strongest words for Johnson, calling him a “lying, treason-loving, woman-hating, Putin stooge.”

He likened his own candidacy to a “strong Wisconsin beer,” holding up a bottle of Spotted Cow from New Glarus Brewing Co. and compared the other Democratic candidates to a bottle of Bud Light.

Olikara, running his first campaign for office, emphasized his work leading the Millennial Action Project, which lobbied Congress to enact bipartisan legislation. He said the best ideas in Congress should be coming from regular people, “not the big money special interests.”

The winner of the Aug. 9 primary will advance to face Johnson, who is seeking a third term after previously promising to not run again. Johnson is also one of Trump’s loudest backers and has been endorsed by the former president. He has espoused conspiracy theories related to the Jan. 6 insurrection and attempted to shift blame for what happened away from Trump supporters.

This version corrects that Nelson compared some of the other Democrats, not Johnson, to Bud Light.