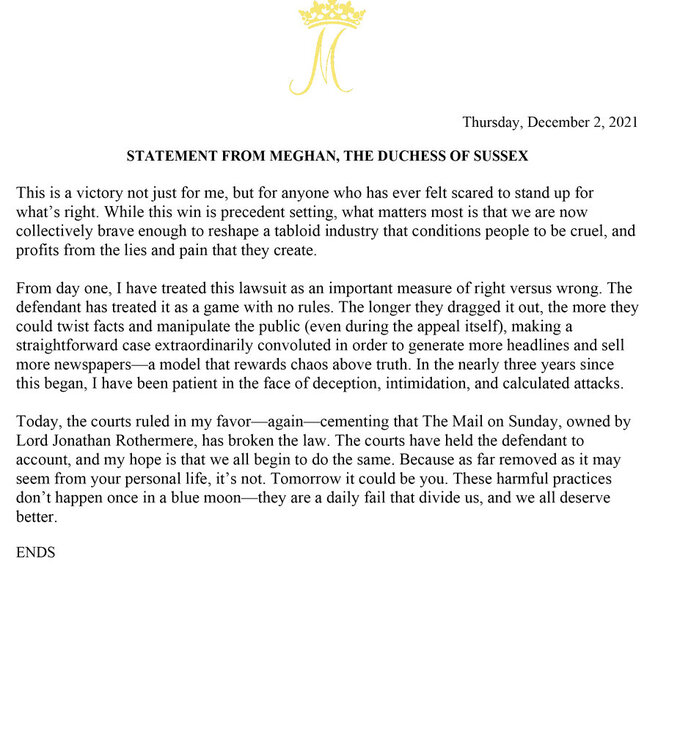 Uncredited, ASSOCIATED PRESS
A copy of a statement issued Thursday Dec. 2, 2021 by Meghan, Duchess of Sussex, commenting on the Court of Appeal's decision to uphold a High Court ruling that publication of the letter that the former Meghan Markle wrote to her father Thomas Markle after she married Prince Harry in 2018 was "manifestly excessive and hence unlawful. The court dismissed on Thursday an appeal by the Mail on Sunday and the MailOnline website that was seeking to overturn an earlier ruling that it breached the privacy of the Duchess of Sussex by publishing portions of a letter she wrote to her estranged father. (Archewell via AP)

LONDON (AP) — The Duchess of Sussex won the latest stage in her privacy lawsuit against a British newspaper on Thursday, when three senior judges ruled its publisher breached her privacy by reproducing parts of a letter she wrote to her estranged father.

The duchess formally known as American actress Meghan Markle said the Court of Appeal ruling was a victory of “right versus wrong." She issued a call to “reshape a tabloid industry” that has long been the bane of both celebrities and British royals.

Losing claimant Associated Newspapers said it was considering an appeal to the U.K. Supreme Court.

Britain's High Court ruled in February that the publisher of The Mail on Sunday and MailOnline website unlawfully breached Meghan's privacy with five articles that reproduced a large chunk of a handwritten letter she sent her father, Thomas Markle, after she married Prince Harry in 2018.

The publisher appealed, and a hearing was held last month. Dismissing the appeal, senior appeals judge Geoffrey Vos said Thursday that “the Duchess had a reasonable expectation of privacy in the contents of the letter. Those contents were personal, private and not matters of legitimate public interest."

In a statement, Meghan, 40, said the ruling was “a victory not just for me, but for anyone who has ever felt scared to stand up for what’s right.”

“What matters most is that we are now collectively brave enough to reshape a tabloid industry that conditions people to be cruel, and profits from the lies and pain that they create," she said.

Associated Newspaper' lawyers disputed Meghan’s claim that she didn't intend the letter to be seen by anyone but her father.

They said correspondence between Meghan and her then-communications secretary, Jason Knauf, showed the duchess suspected her father might leak the letter to journalists and wrote it with that in mind.

The publisher also argued that the publication of the letter was part of Thomas Markle’s right to reply following a People magazine interview with five of Meghan's friends alleging he was “cruelly cold-shouldering” his daughter in the run-up to her royal wedding.

But Vos said that the article, which the Mail on Sunday described as “sensational,” was “splashed as a new public revelation" rather than focusing on Thomas Markle's response to negative media reports about him.

In their appeal, Associated Newspapers had also argued that Meghan made private information public by cooperating with Omid Scobie and Carolyn Durand, authors of “Finding Freedom,” a sympathetic book about her and Harry.

The duchess’ lawyers had previously denied that she or Harry collaborated with the authors. But Knauf said in evidence to the court that he gave the writers information, and discussed it with Harry and Meghan.

Knauf’s evidence, which hadn't previously been disclosed, was a dramatic twist in the long-running case.

In response, Meghan apologized for misleading the court about the extent of her cooperation with the book's authors.

The duchess said she didn't remember the discussions with Knauf when she gave evidence earlier in the case, and had “absolutely no wish or intention to mislead the defendant or the court.”

Meghan, a former star of the American TV legal drama “Suits,” married Harry, a grandson of Queen Elizabeth II, at Windsor Castle in May 2018.

Meghan and Harry announced in early 2020 that they were quitting royal duties and moving to North America, citing what they said were the unbearable intrusions and racist attitudes of the British media. They have settled in Santa Barbara, California, with their two young children.

In her statement Thursday, Meghan said she had been subject to “deception, intimidation and calculated attacks” in the three years since the lawsuit began. She accused the publisher of treating the case as “a game with no rules" and of dragging out proceedings “in order to generate more headlines and sell more newspapers — a model that rewards chaos above truth."

In February, a High Court judge issued a summary judgment, ruling without a full trial that Meghan's privacy and copyright had been breached. Associated Newspapers argued in its appeal that the case should go to trial.

The publisher said in a statement Thursday that “judgment should be given only on the basis of evidence tested at trial,” especially since “Mr. Knauf’s evidence raises issues as to the Duchess’s credibility.”

Lawyer Mark Stephens, who specializes in media law and is not connected to the case, said he believed the publisher will appeal, though it would be unusual for Britain’s Supreme Court to take such a case. He said the publisher could also try to appeal to the European Court of Human Rights.

“There’s an issue of principle here, which is whether this case should be finished before a trial without disclosure, without testing the evidence,” Stephens said. The ruling did not settle questions about whether the letter to Thomas Markle was “always intended for Meghan’s side to publish and to leak and to use as briefing material," he added.

Associated Newspapers “have a right to this trial, and I think that that is just going to protract the pain for Meghan Markle,” Stephens said.

Danica Kirka in London contributed to this report.