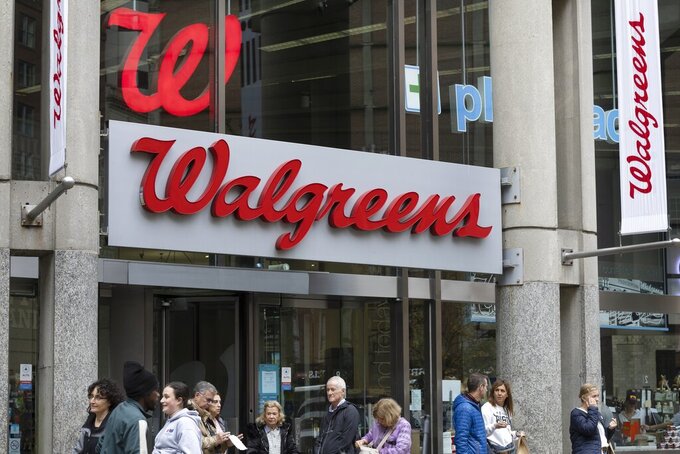 Michael Dwyer, ASSOCIATED PRESS
FILE - The entrance to a Walgreens is seen on Oct. 14, 2022, in Boston. Walgreens dove deeper into the health care sector on Monday, Nov. 7, when its VillageMD unit announced it would acquire another primary and urgent care provider, Summit Health-CityMD, in a deal worth close to $9 billion. (AP Photo/Michael Dwyer, File)

Walgreens extended its push into more comprehensive health care with its VillageMD unit acquiring another urgent and primary care chain, Summit Health-CityMD, in a deal worth close to $9 billion.

Walgreens and rival CVS, two retail chains with thousands of locations, have evolved in recent years with a greater focus on overall care for customers, trying to help them avoid chronic health conditions and expensive hospital stays. That goes far beyond their historic focus on store sales and filling prescriptions.

The deal to combine VillageMD and CityMD arrives just two months after CVS Health said it would pay about $8 billion to acquire Signify Health, a technology company that sends doctors and other care providers to people's homes to assess how they are doing and what help they might need.

Walgreens Boots Alliance, which has a 53% controlling interest in VillageMD, will invest $3.5 billion in debt and equity in support of the deal, which is expected to close in the first quarter of 2023.

In what the companies are calling a “strategic collaboration,” Evernorth, a subsidiary of health insurance giant Cigna Health, is also making an undisclosed investment in the deal and will become a minority owner of VillageMD.

Overall health has also taken on more emphasis with insurers and employers, who must foot medical bills.

Walgreens, which has about 13,000 retail pharmacy locations worldwide including 9,000 in the U.S, has invested billions of dollars in Village MD and is opening primary care practices next to its drugstores so that pharmacies and physician offices can more easily work together.

Village Medical provides primary care for patients at its traditional stand-alone practices, through its Village Medical at Walgreens practices, at home and through virtual visits. Chicago's VillageMD and Village Medical operate in Illinois, Indiana, Michigan, Texas, Nevada, Colorado, Arizona, Florida and Georgia and Kentucky, with more than 1.6 million patients.

Summit Health and CityMD have more than 2,800 providers at more than 370 locations in New York, New Jersey, Connecticut, Pennsylvania and Central Oregon. Summit is based in New Jersey.

Walgreens, which has its headquarters outside of Chicago, also is developing centers across the United States that use automated technology to fill prescriptions and deliver them to pharmacies, giving pharmacists more time to work with customers.

When Walgreens released details of its annual financial performance last month, CEO Rosalind Brewer proclaimed it was the first year of Walgreens’ “transformation to a consumer-centric health care company.”

Citing the combination of VillageMD and CityMD, Walgreens raised its 2025 U.S. health care sales goal to between $14.5 billion and $16 billion, up from the previous forecast range of $11 billion to $12 billion.