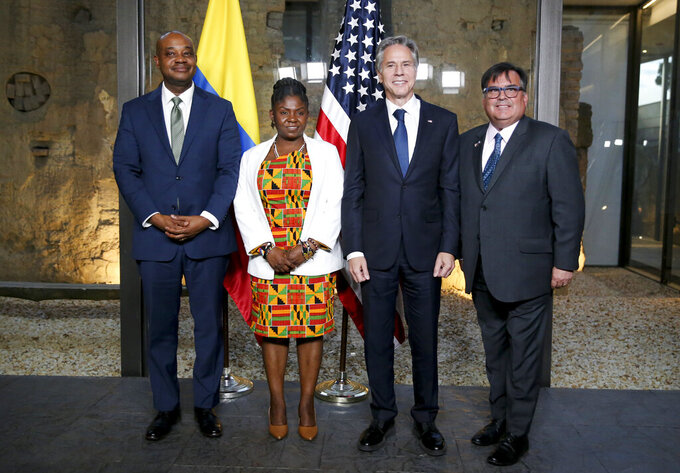 The comments came after a meeting between Blinken and Colombian President Gustavo Petro in Bogota, the first stop on a tour of South America in which the secretary of state will also visit Chile and Peru.

“We strongly support the holistic approach that president Petro’s administration is taking to counter narcotics through comprehensive rural security, justice, development, environmental protection, supply reduction as well as demand reduction including in the United States,” Blinken said in a press conference.

Last month Petro spoke at the U.N. General Assembly and said that U.S.-led efforts to fight drug trafficking around the world had been “a failure.” He accused the U.S. and other developed countries of pursuing a punitive approach towards the drug trade that harmed small farmers in developing nations.

On Monday, Colombia’s president’s spoke in a less combative tone.

Following the meeting with Blinken, Petro said both sides had spoken about “more flexible” ways of tackling the drug trade that seek to reduce production and consumption across the hemisphere.

Petro said coca farmers in remote areas of Colombia should be granted land titles, so that they can be more easily integrated into the legal economy. He suggested the U.S. support a $7 billion scheme to buy land for landless farmers in Colombia, and said an international fund should be created to back projects that would pay some coca farmers to leave the drug trade and become protectors of the Amazon rainforest.

Colombia has been struggling to control cocaine production as several armed groups take over rural areas abandoned by the Revolutionary Armed Forces of Colombia following their 2016 peace deal with the government, while government institutions are slow to arrive.

Petro said tougher action is required against white collar criminals who profit from the cocaine trade in Colombia and the United States, but argued that law enforcement should not be directed against poor farmers who grow coca to eke out a living in remote areas.

The Colombian president said the aerial fumigation of coca crops with chemicals would continue to be banned in order to protect the environment, but added that his administration will seek to manually eradicate “industrial sized” coca fields run by organized crime.