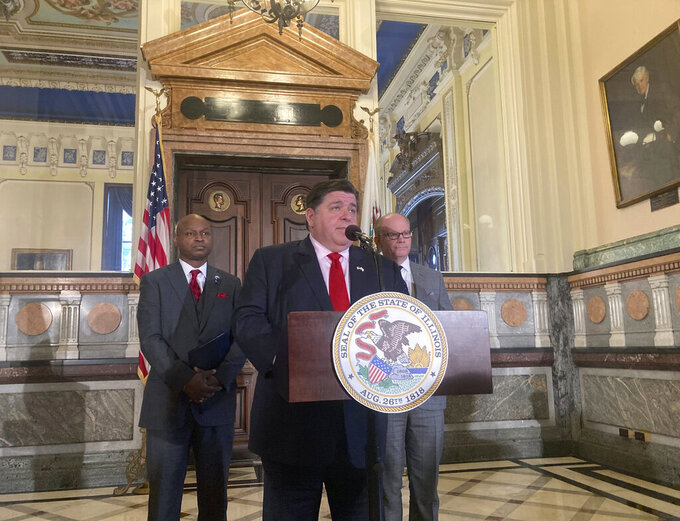 SPRINGFIELD, Ill. (AP) — The Illinois General Assembly was prepared to adopt a state budget of about $45 billion Friday on lawmakers' last day of a scheduled spring session.

But well into the afternoon, the Senate was taking action on other matters and filled time with approving resolutions. House Republicans spent an extended period meeting in private.

On Thursday evening, Gov. J.B. Pritzker and Democratic legislative leaders announced a deal on a budget for the fiscal year that begins July 1. Relying on a robust post-pandemic economy and health tax revenues, the budget includes $1.83 billion in tax relief. It tracks closely with Pritzker's election year proposal last winter, but the amount going back to taxpayers has nearly doubled.

“We engaged in a true give-and-take, which led to genuine compromise,” Pritzker said Thursday in an appearance with Senate President Don Harmon and House Speaker Emanuel “Chris” Welch. "And it honestly helped that we all came into this process, committed to a fiscally responsible spending plan that improved our state’s finances and helped our people in an hour of genuine need."

No bottom line amount for operating expenditures had been announced. And as of Friday afternoon, no legislation ready for a vote.

The plan suspends the 1% sales tax on groceries for a year but scales back a freeze on an automatic increase in the motor fuel tax to six months instead of the year the governor proposed. The property tax rebate would be doubled to as much as $300 per household.

Lawmakers added provisions to double the earned income tax credit, which goes to low- and moderate-income working families to lessen their tax liability and nearly everyone would get checks of $50 (individuals earning up to $200,000 and joint filers making less than 400,000) and their children would get $100 apiece.

But after nearly 20 years of shaky fiscal pictures, Pritzker has promoted the budget's moderation and responsibility. It puts $1 billion into a budget stabilization, or “rainy day” fund and aids deficits in state pension systems with a $500 million additional payment that will save $1.8 billion down the road. In separate legislation, lawmakers paid off $898 in backlogged bills from the employee group health insurance program and made an overdue payment of $230 million to the College Illinois savings program.

Answering Republican criticism that they were not doing enough to address rising crime, Democrats plan to increase public safety spending over what Pritzker proposed by $200 million. Local police agencies would have money for body cameras, automatic license plate readers, and nonlethal equipment such as stun-guns, said Deputy Majority Leader Jehan Gordon-Booth, a Democrat from Peoria.

Other major action this week included a plan to pump $700 million more annually into Medicaid funding for nursing homes to boost staffing. The state's 45,000 resident who live in long-term care homes are in some of the most understaffed nationally, a situation made worse by the COVID-19 pandemic.

The state provides about $2.5 billion. The legislation, on its way to a supportive Pritzker for his signature, would add more than $500 million in federal Medicaid funding, $100 million in general state funds and the rest from assessments on nursing homes.

The nursing home bill is HB246.