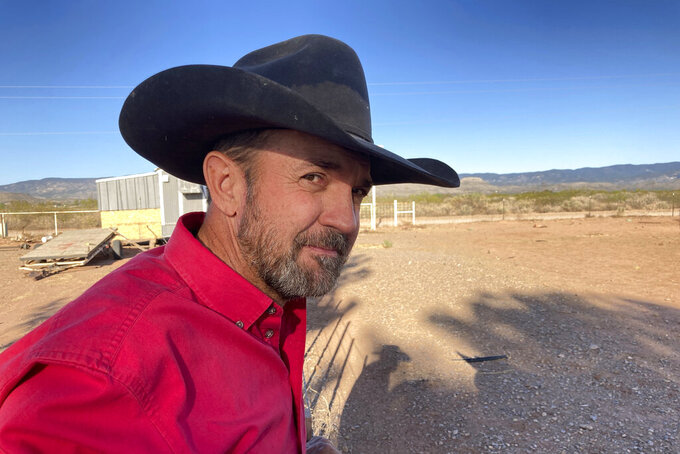 Morgan Lee, ASSOCIATED PRESS
FILE - In this May 12, 2021, file photo, Otero County Commissioner Couy Griffin, the founder of Cowboys for Trump, takes in the view from his ranch in Tularosa, N.M. Time is running out for a petition drive to recall Cowboys for Trump founder Couy Griffin from office as a county commissioner in southern New Mexico. Backers of the petition drive in Otero County say they still need to collect several hundred additional signatures by next Wednesday to trigger a special recall election against Griffin. (AP Photo/Morgan Lee, File)

SANTA FE, N.M. (AP) — Time is running out for a recall effort aiming to kick Cowboys for Trump founder Couy Griffin out of office as a county commissioner in southern New Mexico.

Supporters of the petition drive in Otero County say they still need to collect several hundred additional signatures by next Wednesday to trigger a recall election against Griffin. The petition accuses him of failing to attend commission meetings, using his elected position for personal gain in promoting a support group for former President Donald Trump and violating state restrictions on gifts to public officials.

Separately, Griffin is facing misdemeanor criminal charges in the Jan. 6. insurrection on the U.S. Capitol, where he appeared on an outdoor terrace and tried to lead the crowd in prayer.

Griffin formed Cowboys for Trump in 2019 with a group of rodeo acquaintances to hold horseback-riding parades nationwide in support of Trump. He has ascribed to unsubstantiated claims of fraud in the 2020 election.

Scott Fredrick, a member of a political committee to recall Griffin, said Thursday that the effort was still about 400 registered voters shy of the 1,574 signatures needed to force an election after extensive canvassing. Otero County Clerk Robyn Holmes said the petition is due by 5 p.m. Wednesday.

Fredrick acknowledged that it will be “a stretch" to collect the required signatures but vowed not to give up before the deadline.

“We put on a full-court press, and unfortunately, we're still 400 signatures short,” he said.

If recalled, Griffin's interim replacement would be picked by Democratic Gov. Michelle Lujan Grisham. Fredrick says that provision made it difficult to find support among registered voters in a county with strong currents of conservatism.

Griffin on Friday called the recall campaign and its accusations “100% frivolous.”

As the petition circulated, Griffin has burnished his trademark political credentials at local events: leading a roadside protest against COVID-19 vaccine mandates for military personnel at the entrance to Holloman Air Force Base and backing a county resolution opposing enforcement of coronavirus health orders that require masks in indoor public places.

“We’re a conservative county. We want to have a voice. We don’t want to be ruled over by a tyrannical governor," Griffin said from Montana, where he traveled for a speaking engagement that touched on themes of election fraud. "If I would have been recalled, then that would have given the governor the opportunity to hand-select somebody to serve her.”

The recall petition highlights Griffin’s pursuit of travel reimbursements from taxpayers in Otero County for a cross-country trip in 2019 that culminated in a visit with Trump at the White House.

Recall advocates say they also were driven to action by Griffin’s racial invective and political rhetoric espousing violence. Griffin says his comments urging some Black people to “go back to Africa” and jokes about “dead Democrats” have been misconstrued.