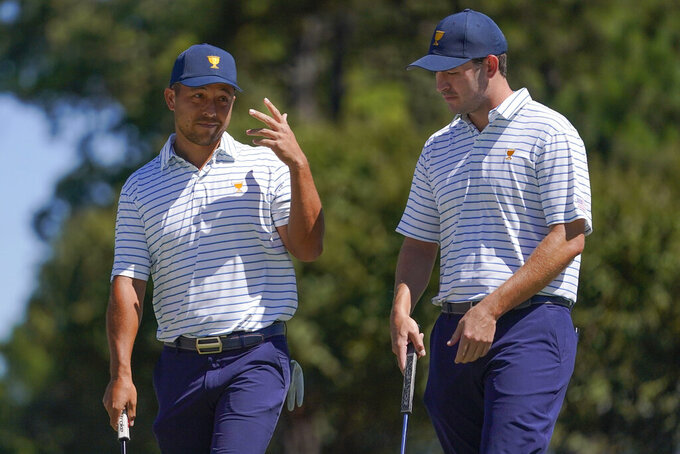 CHARLOTTE, N.C. (AP) — Before the Presidents Cup party could even get started, the Americans couldn't escape questions about what comes next.

The Ryder Cup is one year away in Rome, and while the Americans demolished an aging European team at Whistling Straits last year, they have not won the Ryder Cup away from home in longer than Jordan Spieth can remember.

“You could tell me the last time it happened,” he said.

It was 1993, about two months after Spieth was born. The winning putt came from Davis Love III, now 58, who then was playing in his first Ryder Cup. So it's been a long time.

The Americans have reason to feel confident the losing streak in Europe will end. In their last three team events, they have won by a collective 23 points.

They had all 12 players in the top 25 in the world ranking, which is nothing new. It's been that way for every U.S. team dating to the 2017 Presidents Cup, when Kevin Kisner was at No. 26 and Phil Mickelson at No. 30.

“It's a tall task, going over there,” Spieth said. “I've played in a couple of away games now, and they're very different. But I mean, I'd take this team over there against anybody in the world. ... Going over there, on the road, and winning would be incredibly special next year. And I really hope I'm a part of the team.”

It's that last comment that makes next year so interesting. As good as the Americans have looked over the last decade, no more than nine players have made it from one team to the next one (Presidents Cup and Ryder Cup) over the last 10 years.

The last five teams have included five players who weren't on the previous one.

Spieth would know from experience. He was a three-time major champion in 2017 a few days before he turned 24. He qualified for the Ryder Cup the following year. And then he was left off the Presidents Cup team that went to Royal Melbourne in 2019.

If not for the COVID-19 pandemic that postponed the matches one year and allowed Steve Stricker to have six captain's picks, Spieth probably wouldn't have been on last year's Ryder Cup team.

Newcomers to the U.S. team this year were Billy Horschel, Cameron Young, Sam Burns and Max Homa. A year ago, Young was just starting his rookie season on the PGA Tour and was No. 174 in the world.

It's not just a matter of which players won't be at the Ryder Cup, it's more which new players are going to be difficult to leave off.

As for Europeans, it would seem they are hurt by LIV Golf just like the International team was for the Presidents Cup. Then again, of the five players from the 2021 team who joined LIV Golf, the youngest was Bernd Wiesberger. He's 36, and the Austrian was No. 94 in the world when he joined in June.

Europe has a core of major champions in Rory McIlroy, Jon Rahm, Matt Fitzpatrick and Shane Lowry, along with Viktor Hovland, Tyrrell Hatton, Tommy Fleetwood and perhaps Thomas Pieters, who went 4-1 at Hazeltine and is regaining that form.

Just like the previous 30 years, Americans winning in Europe probably won't be easy.

The International team at the Presidents Cup featured four South Koreans, the most ever. They combined for a 9-7-1 record, and one of them is a star in the making. That would be 20-year-old Tom Kim, who earned his PGA Tour card last month by winning the Wyndham Championship.

The progress of Asian golf -- Masters champion Hideki Matsuyama is the biggest star -- went beyond the Presidents Cup.

On Sunday in the Panasonic Open, Taiga Semikawa became the sixth amateur to win on the Japan Golf Tour. Also over the weekend, Cheng-wei Hsieh became the youngest player (14 years, 33 days) to make the 36-hole cut on a major tour at the Yeangder TPC on the Asian Tour.

Not to be forgotten is Ratchanon Chantananuwat, who goes by “T.K.” The 15-year-old Thai became the youngest winner on a tour recognized by the Official World Golf Ranking when he won the Trust Golf Asian Mixed Cup. He won by two shots over Tom Kim.

It’s not hard to imagine the International team with a new look — and spots on the team more difficult to earn — in the coming years.

The next opening is in 2032, and the choice should be obvious, at least by region.

The LIV Golf Invitational Series Team Championship is Oct. 28-30 at Trump National Doral, which for years was the start of the Florida swing on the PGA Tour and most recently hosted a World Golf Championship through 2016.

The leading four teams, determined by points earned in seven events, will get a bye.

The remaining top seeds (No. 5-8) will pick which four-man team they want to play. Two players will compete in singles, the other two in foursomes. They will go extra holes if needed, and it takes two points to advance. The same format is in play for Saturday among the remaining eight teams.

On Sunday it switches to stroke play, and all four scores count.

The winning team gets $16 million ($4 million per player).

Leave it to team events to bring out the humor in Xander Schauffele, the guy who loves to light up the biggest and best cigar when he wins.

Tom Kim delivered big emotion and big putts as he and Si Woo Kim gave Schauffele and Patrick Cantlay their only loss of the week. Schauffele and Cantlay are close friends who take vacations together when Cantlay isn't giving “Meditations” by Marcus Aurelius another read or finishing up the Winston Churchill trilogy.

Schauffele was asked the effect of Kim's histrionics in the midst of a tight match.

The reporter repeated “histrionics,” and then added “theatrics” for clarification.

“Oh, I know the second one,” Schauffele said. “Xander here, not Patrick.”

Stacy Lewis is turning to a longtime friend and six-time Solheim Cup player to help her in Spain for next year’s matches. Angela Stanford was announced Tuesday as the third assistant captain for Lewis, joining Morgan Pressel and Natalie Gulbis. Lewis and Stanford were teammates in 2011, 2013 and 2015, and both were assistants under Pat Hurst in 2021. ... New Jersey already has three LPGA events next year, and now it's getting a Korn Ferry Tour stop. The Magnit Championship begins a four-year deal. It will be played Aug. 17-20 at Metedeconk National. ... With her 2-and-1 victory, Krissy Carman became the first mother to win the U.S. Women's Mid-Amateur since Ellen Port in 2011. ... Patrick Reed slipped to No. 51 in the world. He had been among the top 50 every week dating to Jan. 12, 2014. ... Justin Thomas is now 16-5-3 from three appearances in the Presidents Cup and two in the Ryder Cup.