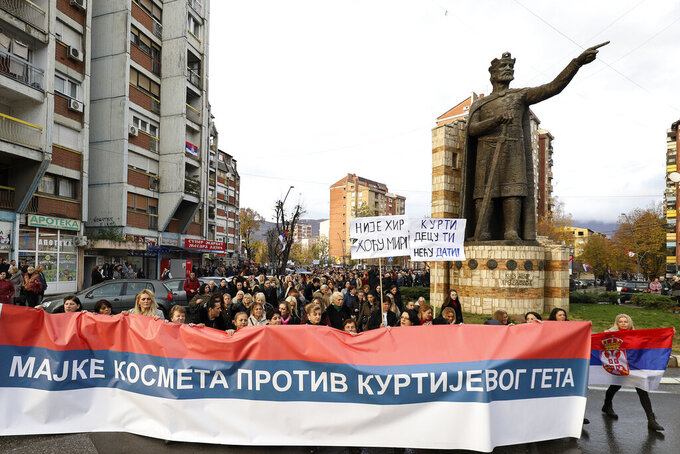 Bojan Slavkovic, ASSOCIATED PRESS
Women carry a banner in the colors of Serbia's flag that reads " Mothers of Kosmet (Kosovo and Metohija) against Kurti's gheto," referring to Kosovo's Prime Minister Albin Kurti, in the northern part of Kosovska Mitrovica, Kosovo, Wednesday, Nov. 23, 2022. Serbs in the northern part of Kosovska Mitrovica protested against planned fines by Kosovo authorities for those who refuse to change their Belgrade issued vehicle registration plates and against the cruelty they say are facing daily from the authorities in Pristina. (AP Photo/Bojan Slavkovic) 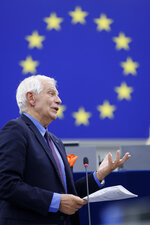 EU high representative Josep Borrell posted in his social media page that Kosovo’s and Serbia’s negotiators “have agreed to avoid further escalation and to fully concentrate on the proposal on normalization of their relations.” Serbia will stop issuing license plates with Kosovo cities’ denominations and Kosovo would cease further actions on the re-registration of vehicles.

Talks will continue on the subsequent steps.

Kurti blamed Borrell for focusing solely on the license plates instead of the full normalization of ties between the neighbors.

Vucic said Kurti was responsible for the failure of the meeting.

The EU-backed Belgrade-Pristina Dialogue, which is aimed at normalizing relations between the neighbors and former foes in the Western Balkans, has been at a virtual standstill for years. The EU warned Serbia and Kosovo last week that they are on the edge of a precipice and must resolve their dispute or face the prospect of a return to their violent past.

Under the ban, about 6,300 ethnic Serbs owning cars with number plates deemed to be illegal in Kosovo were to be warned until Monday, which was postponed with 48 hours after U.S. embassy's intervention. Then Kosovo authorities would fine them for the following two months. Until April 21 they would only be permitted to drive with temporary local plates and not allowed to drive after that date.

The issue of Kosovo’s independence sparked a 1998-99 war in which about 13,000 people died. Serbia launched a brutal crackdown to curb a separatist rebellion by the territory’s ethnic Albanians. NATO bombed Serbia in 1999 to end the war.

Kosovo unilaterally broke away from Serbia in 2008. The Serbian government, with support from China and Russia, has refused to acknowledge Kosovo’s statehood. The United States and most of its European allies recognize Kosovo as an independent country.