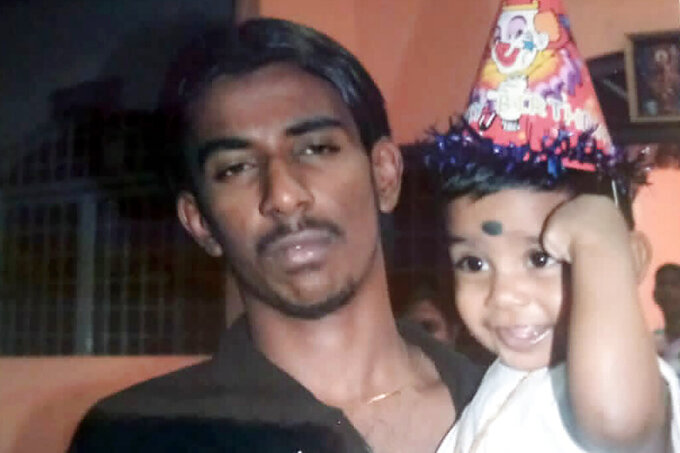 Uncredited, ASSOCIATED PRESS
FILE - This undated photo provided by Sarmila Dharmalingam shows her younger brother Nagaenthran K. Dharmalingam in Ipoh, Malaysia. Singapore’s top court will decide Tuesday on the fate of the Malaysian man on death row who is believed to be mentally disabled, his family and a rights group said Friday, Nov. 26, 2021. (Sarmila Dharmalingam via AP, File)

KUALA LUMPUR, Malaysia (AP) — Singapore’s top court will decide Tuesday on the fate of a Malaysian man on death row who is believed to be mentally disabled, his family and a rights group said Friday.

The hearing at the Court of Appeal was originally scheduled for Nov. 10, a day before Nagaenthran K. Dharmalingam was to be executed by hanging for trying to smuggle less than 43 grams (1.5 ounces) of heroin into the country. But the hearing was postponed after he was diagnosed with COVID-19 in a case that has drawn international attention.

His sister Sarmila Dharmalingam said she has been informed by a Malaysian lawyer that the hearing will now take place on Tuesday.

If the court dismisses the appeal, Nagaenthran, 33, would again be at immediate risk of execution, which could take place very quickly, said UK-based rights group Reprieve.

His brother Navinkumar Dharmalingam said in a statement issued through Reprieve that Nagaenthran's mental state has “severely deteriorated."

“I don't think he has any idea that he's going to be executed. He doesn’t seem to understand it at all. When I visited him, he talked about coming home and eating home-cooked food with our family. It broke my heart that he seemed to think he’s coming home,” Navinkumar said.

“He has other delusions about taking three-hour-long baths and sitting in a garden. He often can’t remember the most basic things and some of what he says is completely incoherent,” added Navinkumar, who visited his brother several times in a Singapore prison before the Nov. 10 appeal hearing.

“Naga is at risk of imminent execution even though he should be protected from the death penalty because of his intellectual disability, and as a victim of trafficking,” said Reprieve’s director Maya Foa.

“Prime Minister Lee Hsien Loong has made clear his commitment to champion the rights of persons with disabilities. Allowing this travesty of justice to take place would fly in the face of those promises," Foa added.

The Malaysian national was sentenced to death in November 2010 under Singapore’s strict anti-drug laws. Previous attempts to reduce his sentence to life in prison or receive a presidential pardon failed, despite pleas from the international community and rights groups.

Death penalty opponents say Nagaenthran’s IQ of 69 was disclosed during an earlier lower court hearing. That level is internationally recognized as an intellectual disability. But the court has ruled that Nagaenthran knew what he was doing.

Legal experts — including with the Anti-Death Penalty Asia Network and Amnesty International — have called the execution of an intellectually disabled man inhumane and a violation of international law and Singapore’s Constitution.

Malaysia's leader, members of the international community, representatives of the European Union and global figures such as British business magnate Richard Branson have also called for Nagaenthran’s life to be spared, and used the case to draw attention toward anti-death penalty advocacy.

Singapore’s home affairs ministry said in response that the country takes a “zero-tolerance stance against illicit drugs” and that the death penalty has been made clear at its borders.

Anyone found with over 15 grams (0.5 ounces) of heroin faces the death sentence in Singapore, although judges can reduce this to life in prison at their discretion. The last execution in Singapore was in 2019.