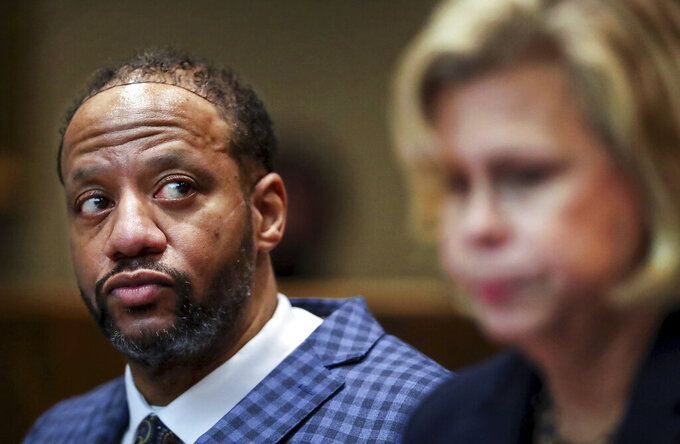 Patrick Lantrip, ASSOCIATED PRESS
FILE - Pervis Payne sits next to his attorney Kelley Henry during a hearing in Shelby County Criminal Court Judge Paula Skahan's courtroom, on July 16, 2021, in Memphis, Tenn. Pervis will no longer face execution over the slayings of a mother and daughter more than 30 years ago because of claims that he is intellectually disabled, a prosecutor announced Thursday, Nov. 18, 2021. (Patrick Lantrip/Daily Memphian via AP, File)

NASHVILLE, Tenn. (AP) — A Tennessee inmate will no longer face execution over the slayings of a mother and daughter more than 30 years ago because of claims that he is intellectually disabled, a prosecutor announced Thursday.

Shelby County District Attorney Amy Weirich announced that 54-year-old Pervis Payne will instead face two consecutive life sentences in prison. Weirich said her office received information last week that the state's expert "could not say that Payne’s intellectual functioning is outside the range for intellectual disability.”

Executions of the mentally disabled were ruled unconstitutional in 2002, when the U.S. Supreme Court found they violate the Eighth Amendment’s ban on cruel and unusual punishment.

But until Gov. Bill Lee signed a bill this summer making Tennessee’s law retroactive in prohibiting the execution of the intellectually disabled, Tennessee had no mechanism for an inmate to reopen his case to press a claim of intellectual disability.

Kelley Henry, Payne's attorney, said her team is grateful lawmakers and the governor enacted the law, and said Weirich's concession “will avoid years of needless litigation.”

“We look forward to Mr. Payne’s resentencing hearing," Henry said in a statement. "This is some measure of justice for Mr. Payne and his family, but our fight for full exoneration of this innocent man will continue.”

Weirich said she met with the family of the victims and they are “not happy, but they understand.”

“While the evidence of Payne’s guilt has never change or weakened, the laws regarding alleged intellectual disability as it related to the death penalty have changed,” Weirich told reporters in a prepared statement.

Shelby County Judge Paula Skahan had scheduled a Dec. 13 hearing to address the intellectual disability claims. Weirich said the state has withdrawn its request for the hearing, which means the death penalty will be removed and replaced with the two life sentences.

“After review of the evidence, law and expert opinions, the State stipulates the Petitioner would be found intellectually disabled,” prosecutor Steve Jones wrote in a court filing.

Payne’s case has drawn national attention from anti-death-penalty activists and includes the involvement of the Innocence Project, which argues for the use of DNA testing in cases claiming wrongful conviction.

Payne had been scheduled to die last December, but the execution was delayed after the governor granted him a rare, temporary reprieve because of the COVID-19 pandemic. The reprieve expired in April, but the state Supreme Court had not set a new execution date yet.

Payne was sentenced to death in a Memphis court for the 1987 stabbing deaths of Charisse Christopher and her 2-year-old daughter, Lacie Jo. Christopher’s son, Nicholas, who was 3 at the time, also was stabbed but survived.

Payne, who is Black, has always claimed innocence. He told police he was at Christopher’s apartment building to meet his girlfriend when he heard the victims, who were white, and tried to help them. He said he panicked when he saw a white policeman and ran away.

Last year, Skahan allowed DNA testing in Payne’s case for the first time. His DNA was found on the hilt of the knife used in the killings, which matches his trial testimony that he cut himself while handling the knife as he tried to help the victims, Henry told the court at a January hearing.

Payne’s DNA was not found on the rest of the handle, although partial DNA evidence from an unknown man was. However, there was not enough DNA material to enter it into a national FBI database and attempt to match it to someone else, Henry said. Scrapings from Christopher’s fingernails, collected from the crime scene, could not be located for testing.

Weirich fought the DNA tests. She has said that the evidence overwhelmingly points to Payne as the killer and her office is contesting the intellectual disability claims.