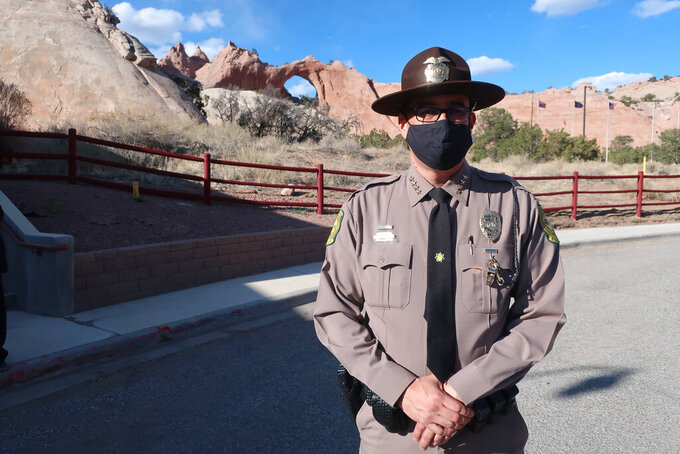 FLAGSTAFF, Ariz. (AP) — The police chief on the Navajo Nation is stepping down to oversee a much-smaller police department in the town where he grew up.

Phillip Francisco took over the Navajo Nation Police Department in 2016 after the position had been vacant for several years, with various officers temporarily at the helm. The 45-year-old said Tuesday he's leaving at the end of December to become police chief in Bloomfield, New Mexico.

The Navajo department has a staff of about 200, less than half of what it needs to adequately police the 27,000-square-mile (70,000 square-kilometer) reservation that's larger than 10 U.S. states.

Navajo President Jonathan Nez credited Francisco with re-establishing the tribe’s police academy in Chinle, leading an effort to boost salaries for officers and maintaining the police force that's been affected by COVID-19 deaths and retirements.

Francisco said much of the work has been in crisis management with not enough staff, violent crime that is fueled by substance abuse, the coronavirus pandemic and having to answer to tribal lawmakers.

The Navajo police department gets an average 232,000 calls per year, and responding to them can take hours because of the remoteness of the reservation where most roads are unpaved, according to a recent assessment of the department. Officers make more than 26,000 arrests per year, the assessment said.

“I think I have done a lot of things, but I haven't been able to do some of the innovative programs that reduce crime,” Francisco said.

Eugenia Charles-Newton, the chairwoman of the Navajo Nation's Law and Order Committee, said she didn't believe Francisco effectively communicated with the committee or had a solid plan on how to improve public safety on the reservation.

“I'm glad that he's going to a place where he's going to be happy, but the true measure for me is asking this question: ‘Has the criminal rate decreased since he’s been chief?'" she said.

The assessment recommended a Navajo police force of at least 500, management training and coming up with ways to recruit and retain personnel. Part of the solution also is treatment centers, mental health facilities, economic development and instilling values that deter people from crime — efforts that stretch beyond but can include the police department, Francisco said.

“To really affect change and safety in these communities, we need to start addressing the cause,” he said.

Daryl Noon, who had been a deputy chief under Francisco, will take over as the Navajo Nation police chief.

“We have a lot of things rolling in the right direction, and now it's building on that,” Francisco said. “I'm confident the department is in a better place.”

A major factor in Francisco's decision to leave is that he has 17 years vested in the New Mexico state retirement system, and needs another five or so to retire will full benefits, he said. He starts his new role in January.

“This opportunity is pretty big,” Francisco said. "It’s my hometown where I grew up and my parents live."

The Bloomfield Police Department has a staff of about 20, covering the city of about 8,000 in northwestern New Mexico. Francisco will succeed David Karst who retired as the police chief there in August.

“Everyone you speak to just has high accolades for him (Francisco), and I just find him to be very professional, a great personality,” said City Manager George Duncan said. “I think he's a nice fit here in our community.”