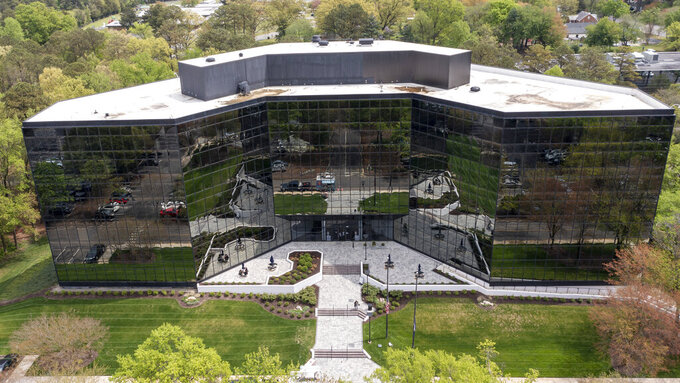 Steve Helber, ASSOCIATED PRESS
FILE - This image taken with a drone shows exterior of the headquarters of the Virginia Employment Commission in Richmond, Va., Thursday, April 15, 2021. Four people have been charged with conspiring to use the personal identifying information of 35 Virginia prison inmates in order to fraudulently obtain over $300,000 in pandemic-related unemployment benefits, authorities announced Friday, May 6, 2022. The charges mark the latest in a series of criminal cases brought in Virginia over unemployment fraud, which has been widespread across the country amid the pandemic. (AP Photo/Steve Helber, File)

RICHMOND, Va. (AP) — A data error triggered during the Virginia Employment Commission's long-delayed transition to a new IT system late last year has resulted in thousands of applicants erroneously being told they were overpaid, the agency confirmed this week.

The VEC intends to inform the 6,811 impacted individuals this month, Commissioner Carrie Roth said, letting them know they are not on the hook for returning money they never received.

The problem is just one in a series of ongoing issues stemming from the conversion to the new system, and the latest in a long list of challenges for the beleaguered agency, which Republican Gov. Glenn Youngkin campaigned on overhauling. The commission could not keep up when swamped with claims at the start of the coronavirus pandemic, and backlogs mounted along with customer service complaints. While employment agencies around the country struggled with the surge in jobless claims and evolving federal assistance programs, Virginia's response was by some measures exceptionally poor.

Roth said in a wide-ranging interview that tremendous strides have been made so far, for example in reducing customer service call center wait times and ending or reducing backlogs of paperwork and unpaid pending claims. But she acknowledged that serious hurdles remain, including: addressing the incorrect overpayment notices, fixing a website that routinely blocks users, ending a backlog of thousands of appeals and working through around 266,000 potentially fraudulent claims, including about 62,000 questionable identity issues. Of the $14.6 billion in benefits the agency has paid out since March 2020, the latest estimate is that about $1.6 billion was potentially fraudulent, she said.

“Our goal is to become the best employment commission in the country. We’ve got a long way to get there, but that’s what we’re rallying around,” Roth said.

The AP asked the agency months ago about the potential of a widespread overpayment issue after hearing in February from Peter Martin, a Henrico County claimant who believed he had received an overpayment notice in error and had been informed by an agency representative that the problem was impacting others.

An agency spokeswoman initially said VEC leadership wasn't aware of any such issue. The AP asked again in April and did not receive a response. Documents obtained through an open records request confirmed the existence of the problem, and Roth then offered an interview to discuss it.

Martin, who was laid off from a job at CarMax in August 2020 and applied for benefits, said he was in the middle of a pending appeal when he received a notice of overpayment for about $2,000 more than he had ever been paid. Like many other applicants over the past two years, Martin said he struggled to get basic information about his case and was often given contradictory information.

“Talking to the people at customer service was like a brick wall," said Martin, who provided meticulously detailed correspondence about his case.

Roth acknowledged that many of the new employees at the call centers the state paid tens of millions of dollars to set up “weren't really empowered to resolve any issues.” She said the agency has increased training so those workers can now help with “minor issues.”

Wait times have almost universally improved to under a minute, and the centers are no longer blocking calls when busy, she said.

The VEC is also working on streamlining its website, conducting agency-wide customer service training and doing a “plain language” review of all communications to make bureaucratic language easier to understand, she said.

That language review was a recommendation of the legislature's watchdog agency, which surveyed the problems at the VEC last year and suggested then-Gov. Ralph Northam's administration could have mounted a stronger response to the problems that proliferated.

The Joint Legislative Audit and Review Commission report found that VEC had been in the process of modernizing its IT system for 12 years, and was eight years behind schedule. Neither VEC nor the contractor have consistently dedicated enough staff to the effort, the report said.

Documents the AP obtained through FOIA say the IT switch-over from the legacy system built in 1985 wreaked “havoc on our converted data," resulting in the overpayments. A spreadsheet lists other ongoing problems, including “random lag or downtime” impacting business and “broken data” that's “occupying a significant amount of bandwidth and masking discovery of other defects.”

Users have also reported persistent issues since the new system went live, according to Pat Levy-Lavelle, an attorney at the Legal Aid Justice Center who has worked on unemployment insurance issues.

“These include people not being able to file weekly claims; people getting messages about important documents, like information-seeking forms or decisions, that they then cannot access; people being locked out or saying that their identity is not recognized or their claim isn’t in the system; etc." he wrote in an email earlier this year.

Roth said that last month, only about 20% of users were able to get through a security filter to access the online filing system, a number she called clearly unacceptable. That number has improved to about 40%, she said.

Roth said the vendor for the project, HCL America, has lots of work left to do for the administration to be satisfied.

As for Martin, who now works as an EMT, he was recently told in a voicemail that VEC was working to correct the overpayment issue but that he should go ahead and appeal it “just to be on the safe side.”