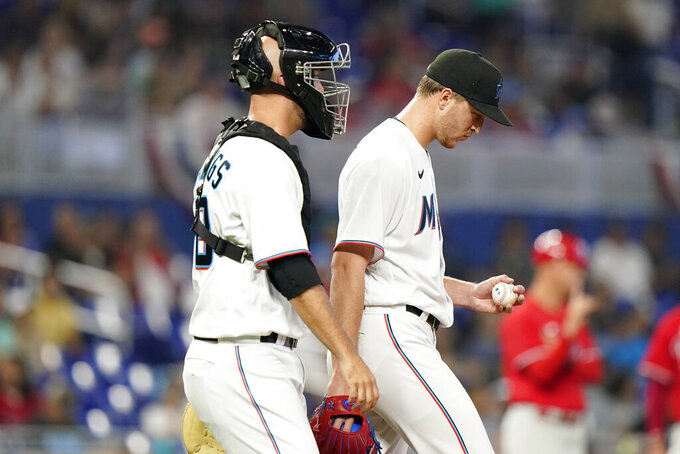 Alec Bohm had two hits and three RBIs, and Nick Castellanos added two singles and an RBI for the Phillies, who snapped a four-game losing skid.

A night after going 0 for 9 with runners in scoring position, Philadelphia finished 7 for 12.

“There are days where you’re not going to look very well offensively no matter who you have in the lineup,” Phillies manager Joe Girardi said. “There are just those days. Eventually, these guys are going to get going and when they do you can have outbursts like today. We’re too good not to get going.”

“That was my goal today, to get to five innings and give the team a chance to win the game,” Suárez said through a translator. “My plan was to attack hitters and try to be sharp.”

Two-run doubles from Harper and Johan Camargo keyed a six-run second that chased Miami starter Trevor Rogers. Bohm also hit an RBI single and Matt Vierling had a run-scoring double in the inning.

A finalist for 2020 NL Rookie of the Year, Bohm has seen his playing time at third base diminish recently with Camargo getting most of the starts. Bohm was the designated hitter Saturday.

“I’m not trying to worry whether I’m starting or coming off the bench,” Bohm said. “I’m here to put together good at bats and help the team win.”

Rogers (0-2) allowed seven runs and four hits, struck out three and walked four in 1 2/3 innings. Miami’s representative in the 2021 All-Star Game, Rogers lost his seventh straight decision and remains winless since June 10. The left-hander’s ERA increased to 12.15 and he believes he might be tipping off his pitches.

“It’s a possibility,” Rogers said. “Definitely have to look at that (Sunday). There could be something.”

The Phillies made Rogers throw 40 pitches in the first inning for a quick 2-0 lead. Rogers allowed one-out walks to Rhys Hoskins and Harper and a single to Castellanos single before Bohm’s sacrifice fly to center scored Hoskins.

Harper stole home after Castellanos got caught in a rundown while attempting to steal second.

“Obviously, they’ve got a good hitting club and we give them a lot of credit,” Marlins manager Don Mattingly said of the Phillies’ lineup. “They did a nice job laying off (Rogers’) changeup today or split or whatever they call it. You know, we’ll get back to work and be better next time out.”

Miami’s free agent acquisitions Jorge Soler and Avisaíl García hit their first homers with their new club. Soler connected off Suarez with a two-run shot in the fifth, and García hit a solo blast against reliever Bailey Falter in the eighth.

TAKE IT FROM THE TOP

J.T. Realmuto went 0 for 5 with four strikeouts while leading off Saturday, an unusual spot for the Phillies catcher since he joined the Phillies but not with his previous club. The former Marlin led off 41 times during his five seasons in Miami.

HEAT AT THE BALLPARK

Before he tends to more pressing matters, Miami Heat forward Udonis Haslem was among the crowd of 13,412. The Heat open their first-round playoff series against the Atlanta Hawks Sunday in Miami.

Marlins: 1B Garrett Cooper was removed after the third inning because of left elbow contusion.