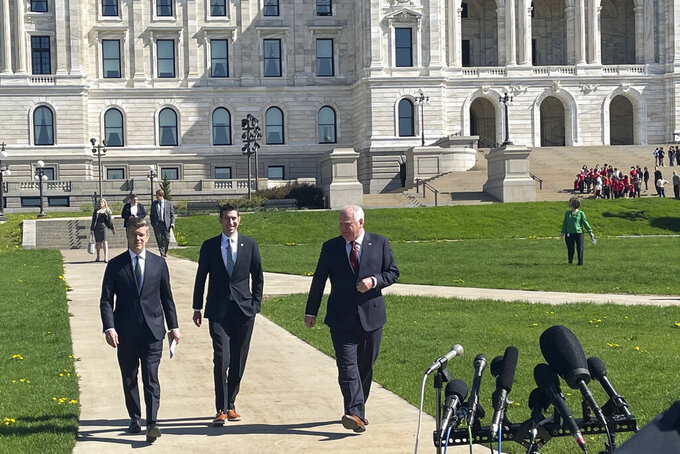 Mohamed Ibrahim, ASSOCIATED PRESS
From left, Democratic House Majority Leader Ryan Winkler, of Golden Valley, Republican Senate Majority Leader Jeremy Miller, of Winona, and Democratic Gov. Tim Walz walk to meet reporters in front of the Minnesota State Capitol in St. Paul, Minnesota, on Monday, May 16, 2022. Walz and legislative leaders announced a bipartisan deal Monday on a framework for how to spend the state's huge budget surplus in the final week of the legislative session. (Mohamed Ibrahim/Report for America via AP)

But sticking points between Senate Republican and House Democratic committee chairs in most other areas — including health and human services, education and public safety — have forced leaders to get involved to try to hammer out agreements before an 11:59 p.m. deadline on Sunday.

“They have to get realistic,” Hortman told reporters. “Everybody has to kind of cut to the chase and understand that compromise means some ideas from both sides are in the final agreement.”

Democratic Gov. Tim Walz and top legislators agreed on targets for how to divide up the state’s $9.25 billion budget surplus earlier this week, with $4 billion for tax relief, $4 billion in spending and another $4 billion to be left in reserve.

The spending portion includes $1 billion each for education, and health and human services, and $450 million for public safety.

An $18.4 million drought relief package that appeared complete after weeks of negotiations hit another snag Friday. The proposal includes $8.1 million in grants for livestock farmers and specialty crop producers, in addition to $5.3 million to the Department of Natural Resources for tree replacement on state-managed lands. Funding proposed by House Democrats for tree replacement grants for local and tribal governments, as well as for equipment for using water more efficiently and to help sustain trees that are already planted, was left out of the final bill.

Republican Sen. Torrey Westrom, of Elbow Lake, said in a statement that both sides had reached a compromise on the drought package, but that House Democrats then backed off.

Hortman said the rural broadband conference committee made significant progress on its $50 million package, while lawmakers also wrapped up $15 million in supplemental spending for agriculture.

But legalizing sports betting, which cleared a hurdle Thursday by passing out of the Senate Finance Committee, appeared doomed because neither side could agree on whether to allow the state's horse racing tracks to conduct wagering. The House version would limit it to tribal casinos.

Republican Sen. Roger Chamberlain, of Lino Lakes, the Senate author, said he won't accept removing the tracks from the bill to conform with the House version, conceding that it means the bill will likely not pass this session.

“I would say it's as close to done as you can get,” Chamberlain said Friday.

Even though the tax bill was the closest of the big bills to being finished, Hortman said the legislation — which needs to pass the House before it goes to the Senate — will be used as leverage to ensure all of the other bills get done first before it is brought to the floor.

Citing the urgency of the nationwide baby formula supply crisis, Senate Democrats tried but failed to force passage of a House-approved bill to clamp down on price gouging, which was championed by Attorney General Keith Ellison. They won an initial test on a bipartisan 55-11 vote.

But 16 Republicans then switched on a second procedural vote, which was 39-27. That fell short of the 45 votes require to allow immediate consideration of the bill, probably dooming it for the session.

Democratic Sen. Lindsey Port, of Burnsville, said the flipped Republican votes sent “a really frustrating message to moms across Minnesota who are driving from store to store, worried about how they’re going to find and afford the formula that is on the shelves.”

Democratic Senate Minority Leader Melisa López Franzen, of Edina, said she hopes the impasses can be resolved, and that she expects lawmakers to remain at the Capitol until the deadline to get their work done.

“We are going to be here all weekend," she said. "Things are still fluid but we’re expecting to be on the floor today, tomorrow and Sunday until 11:59, until we can pass all the bills.”