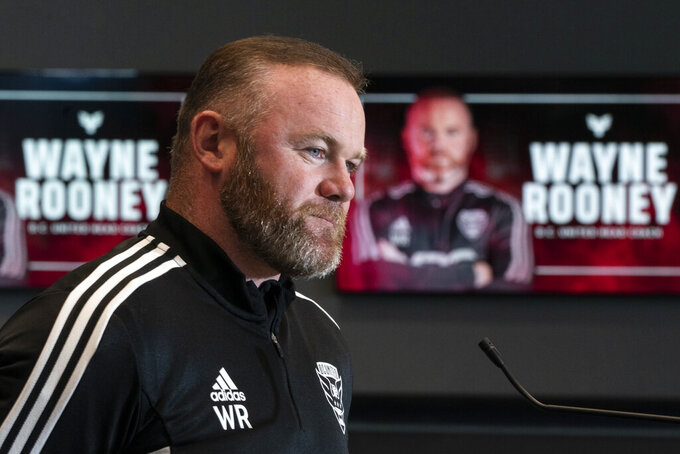 Rooney was introduced Tuesday as coach four years after he joined D.C. United as a player, saying he’s in a completely different place now as a human being. That place is still in the early stages of coaching, an area he’d like to stay in after leaving English club Derby last month following 18 months in charge.

“To really come here, back to the MLS, back to D.C. United was an exciting challenge for me and something which I feel can develop me as a coach,” Rooney said at a news conference at Audi Field. “I’m at the point of my managerial career where I have to put the work in, I have to put the hours in. Of course I’m an ambitious person. One day I went to manage at the top level, and this is part of that process in terms of committing time to develop this club, time to get success here but also develop myself as a manager.”

The 36-year-old former England star said he was approached by teams in his native country and elsewhere in Europe after leaving Derby but was planning to take a break. D.C. United was the only MLS club he would join, and Rooney jumped on that offer after speaking with his wife, who he said will remain in England with their children for the time being.

“That’s not an issue whatsoever from a family point of view,” said Rooney, whose stint as a player with United ended in part because of his family's wishes.

D.C. United could certainly use a boost from Rooney’s return to the team he played for in 2018 and 2019. It’s tied with Chicago for the fewest points in the 28-team league with a record of 5-10-2 and lost 7-0 on Friday night at Philadelphia, matching the MLS record for largest margin of defeat.

“Where the players have been at this season, I believe they’re underperforming,” said Rooney, who has followed the team closely since this opportunity came up. “I believe there’s a lot more for the players to give and the organization has to be right for the players. They have to be hard to beat.”

Co-chairman and CEO Jason Levien said Rooney’s arrival “put a pep in everyone’s step.” He joked he told Rooney he expected the same success the team had when the leading goal-scorer in English national team history joined as a player four years ago.

“Even if we don’t do as well as that, I think we’re going to do quite well,” Levien said. “I think you’re going to see a real uplift in our play.”

Rooney believes he’s up to the task.

“The team needs to improve,” he said. “I think that’s obvious for everyone to see, and I really believe with my capabilities of developing players, young players and of course we’re working hard to get a few new players in, we can really get this club back to successful ways. It’s going to take a lot of hard work, but that’s what I’m here to do and really improve the team.”