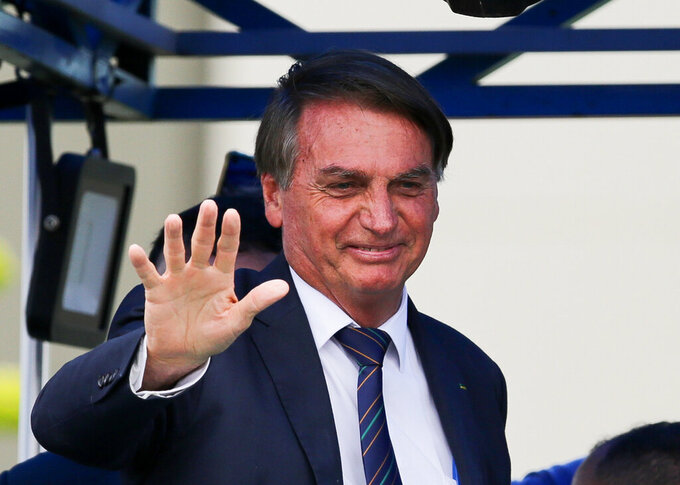 After two years without a political party, Bolsonaro decided to join one of the parties in the so-called Center group, a sign that he is changing course from his 2018 campaign strategy, when he sharply criticized old-school political practices.

“It is a simple event, but very important so that we can compete for something later,” Bolsonaro said in Brasilia during the ceremony in which a Cabinet minister and one of his sons, Sen. Flávio Bolsonaro, also joined the Liberals.

Bolsonaro hopes the alliance can help him defeat his nemesis, former President Luiz Inácio Lula da Silva, who served from 2003 to 2011 and will likely try for a third term in 2022. “Lula,” as da Silva is universally known, leads Bolsonaro in the main polls.

The Liberal Party became the ninth party of Bolsonaro’s political career, which began as councilman of Rio de Janeiro in the late 1980s. Like other Center parties, the Liberals are known for ideological malleability and for making alliances to seek shares of government appointments and funding. In 2002, the party allied with da Silva to run a candidate for vice president.

The Liberal Party, formerly known as the Republic Party, was born in 1985, when Brazil regained democracy. Its ideological twists have veered from supporting the leftist Lula and his successor Dilma Rousseff to backing the conservative who took office when she was removed, Michel Temer.

The party currently is the third-largest force in the highly fragmented Chamber of Deputies, with 42 of the 513 seats. It has been one of the parties most welcoming to the Bolsonaro government’s proposals in Congress.

The party delegation includes 15 deputies who are part of a group of almost 200 Evangelical lawmakers who defend religious projects and values ​​in Congress.

Valdemar da Costa Neto, the Liberal Party president, was convicted in 2012 of corruption and money laundering in a vast vote-buying scandal that almost brought down da Silva’s administration. He also served time in prison.

Bolsonaro campaigned as a political outsider in 2018, a stance that could be dented by his embrace of mainline parties according to analysts.

He captivated many voters by vowing to shun the horse trading that benefited entrenched actors and allowed corruption.

But the far-right president has turned to the Center bloc for political shelter from increasing pressure on his administration, including more than 100 requests for impeachment and declining popularity in polls. In August, Bolsonaro appointed one of the main senators from the bloc to be his chief of staff.

“I feel at home here ... an affiliation is like a marriage and we will be a family,“ said Bolsonaro on Tuesday, surrounded by Center bloc politicians.

With elections looming, Bolsonaro chose to commit to a major party that will bring him resources to campaign. He will need all the help he can get in reelection bid, Marco Antonio Teixeira, a political science professor at the Getulio Vargas Foundation in Sao Paulo, told The Associated Press.

“Bolsonaro must show results that he does not have. The economy is very weak and there are no prospects for improvement in the short term,” Teixeira said.

Bolsonaro didn't confirm on Tuesday whether he will run in the elections next year.

But he said his victory in 2018 took power “out of the hands of the left” and said that Brazil’s destiny otherwise was to become like chaotic, socialist-led Venezuela. “We are the majority and we must guide the destiny of the country. The future is in our hands.”