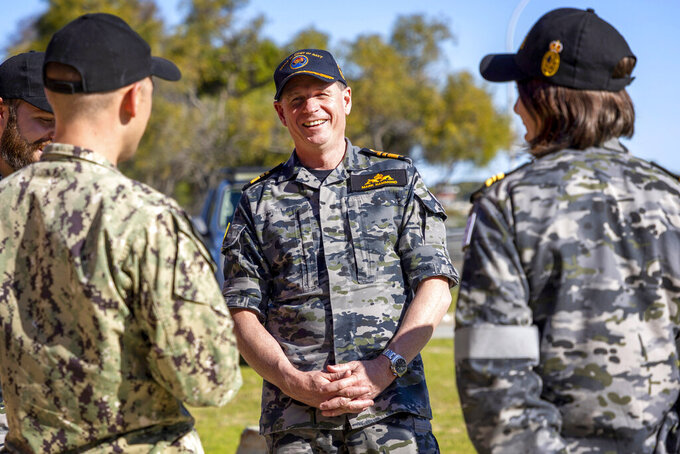 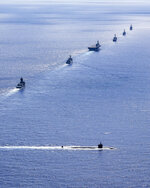 Vice Admiral Mark Hammond said the “odd” Chinese tactics had not escalated in recent years, which left him “reasonably comfortable” that Australian crews were safe.

Hammond was speaking to reporters ahead of a multination naval drill Exercise Kakadu starting from the northern Australian port of Darwin on Monday for the first time since the coronavirus pandemic began.

His comments on Australian naval operations in the South China Sea follow an Australian Defense Department complaint that a Chinese navy ship fired a laser at one of its surveillance aircraft in February, endangering the crew.

Hammond said the behavior of the Chinese navy, a branch of the People’s Liberation Army, had changed toward Australian warships in the South China Sea in recent years.

“Our interactions between our ships ... have been professional and safe. Routinely whenever we have a ship up there, there’s a PLA navy vessel within sight quite often following us around,” Hammond said.

“That’s unusual behavior. I don’t know another navy that does that. It’s a departure from what we would call normal maritime behavior. But it hasn’t stopped us from conducting our operations,” he added.

Hammond said the Chinese behavior had not changed in the past six or seven years.

“So that gives me some confidence that there’s a degree of status quo around what we’re doing at the moment,” Hammond said.

“From a ship-to-ship perspective, ... I’m still reasonably comfortable,” he said.

“The behavior’s odd that they want to know where we’re going and they want to follow us around. But it’s not impeding our safe passage,” he added.

Exercise Kakadu involves 22 nations including the United States and from as far away as Germany. The exercise involves up 17 ships, an Australian submarine, 34 aircraft and 3,000 personnel.

When Exercise Kakadu was last held in 2018, a Chinese frigate took part.

Bilateral relations have since soured, with China imposing a series of official and unofficial trade sanctions on Australian exports.

Hammond said whether China is ever again invited to participate was a question for the Australian government, which changed at elections in May.

“If the political relationship returns to that position we were in in 2018, then I can see that we might be in that space again,” Hammond said.

“I’ve yet to see an Australian ship invited to an PLA naval exercise. So there’s probably some distance to go,” he added.

Hammond said he was prepared for possible surveillance of the exercise by the Chinese navy.

“The exercise will happen in international waters outside our territorial seas and it’s not unusual to see ships from many different nations in that environment,” Hammond said.

“We prepare accordingly and we’ll scale and manage the exercise accordingly, as we have in the past,” he added.