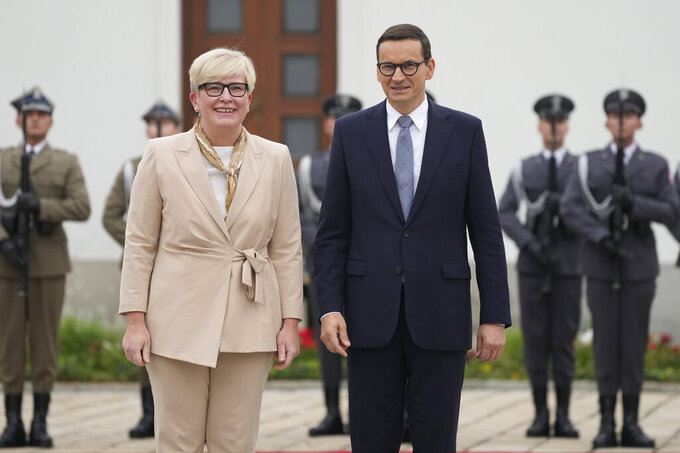 Czarek Sokolowski, ASSOCIATED PRESS
Lithuanian Prime Minister Ingrida Simonyte, left, being greeted by Poland's Prime Minister Mateusz Morawiecki on a visit for talks that include the region's security in the face of migrant pressure on the two countries' borders with Belarus, in Warsaw, Poland, on Friday, Sept. 17, 2021. (AP Photo/Czarek Sokolowski) 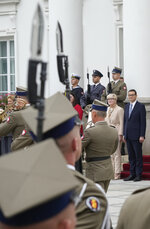 WARSAW, Poland (AP) — The prime ministers of Poland and Lithuania said Friday that tighter security at their borders with Belarus was the best way to ease pressure from migrant inflows there, as they expect what they called a “hybrid attack” from Belarus to continue.

Morawiecki and Simonyte, as well as their government members, discussed ways of preventing illegal migration and enhancing border security.

“We are preparing for a scenario of a long-term dispute around our borders," Morawiecki said following the talks. He added that the two countries would implement "a stronger physical protection against the illegal migration, which (Belarusian President Alexander) Lukashenko's regime has turned into a weapon.”

Both countries have introduced local emergency states blocking access to their borders with Belarus. They are also building razor wire fences there and have increased border guard patrols and vehicles.

Poland, Lithuania and Latvia have seen a sharp rise in crossings by Iraqis, Afghans, Syrians and Africans through Belarus in recent months. The three EU countries accuse Belarus of pushing the migrants across their borders.

The issue arose after Western countries imposed sanctions on Belarus for its repression of opposition members after Lukashenko won a sixth term last year in elections that the West and the opposition say were rigged.

Germany’s Der Spiegel magazine said Friday that Germany is stepping up patrolling of its 460-kilometer (280-mile) border with Poland because of the increased number of illegal crossings and smuggling attempts into Germany, mainly of migrants from Iraq who had entered the EU from Belarus.

Simonyte said Friday that Lithuania was looking for best technical and personnel solutions to protect its long border of over 500 kilometers (300 miles) with Belarus.

“We must put a physical barrier on our borders because one can clearly see that electronic devices alone are not enough to meet such a hybrid attack,” she said.

Morawiecki said Poland estimated some 10,000 people were brought to Belarus from the Middle East, chiefly from Iraq and Syria, to exert pressure on the EU’s eastern border.

On Wednesday, EU president Ursula von der Leyen said that by pushing migrants to the EU eastern border the “regime in Minsk has instrumentalized human beings," in what she called a “hybrid attack to destabilize Europe.”