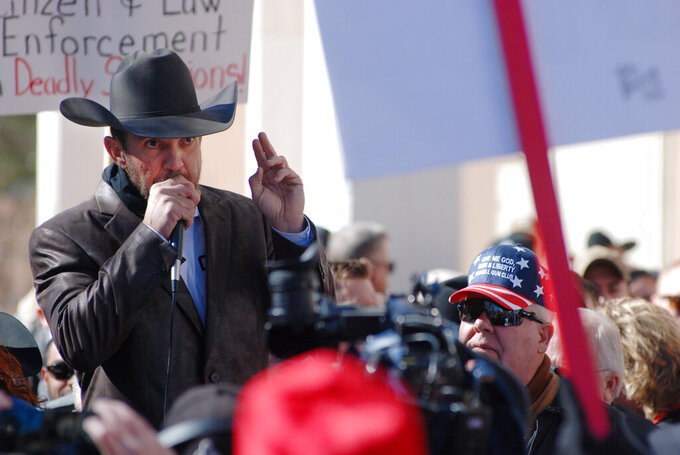 Morgan Lee, ASSOCIATED PRESS
FILE - In this Friday, Jan. 31, 2020 file photo, Otero County Commissioner Couy Griffin speaks in Santa Fe, N.M., during a gun rights rally. A state district court judge says an effort can move ahead to try and recall Griffin, the Cowboys for Trump founder from his seat as an Otero County commissioner on accusations of using his public office for personal gain. District Court Judge Manuel Arrieta on Thursday, April 8, 2021, ruled in favor of a group of recall petitioners who say that Griffin had repeatedly abused his authority and should be subject to a recall election this year. (AP Photo/Morgan Lee, File)

SANTA FE, N.M. (AP) — Cowboys for Trump founder Couy Griffin has filed an appeal with the state Supreme Court as he seeks to fend off an effort to recall him from office as a county commissioner in southern New Mexico.

Griffin filed a notice of appeal Monday with the high court that contends he was deprived of due process rights and raises other jurisdictional objections.

A state district court judge this month found good cause for a recall petition, but Griffin says the hearing took place unjustly at the same time as an Otero County commission meeting where he was being pressured to resign.

Retired military veteran Paul Sanchez and other members of the Committee to Recall Couy Griffin are accusing Griffin of using his elected county position for personal gain. They say Griffin used his office to solicit contributions to Cowboys for Trump that covered his personal expenses.

Griffin has called those allegations frivolous, baseless and politically motivated.

Cowboys for Trump has held horseback-riding parades across the country in support of President Donald Trump. Griffin says the group is a for-profit endeavor that is not subject to financial disclosure requirement for political organizations.

It was unclear how soon the state Supreme Court will decide whether to intervene.

Separately, Griffin is defending himself against criminal charges in connection with the siege on the U.S. Capitol in Washington.

Griffin was videotaped on the steps of the Capitol but not inside. He denies allegations that he knowingly entered barricaded areas with the intent to disrupt government as Congress considered Electoral College results.

If allowed, a recall petition against Griffin with a sufficient number of signatures could trigger a special election within months. Otherwise, Griffin is up for possible re-election in 2022 for a second, four-year term.