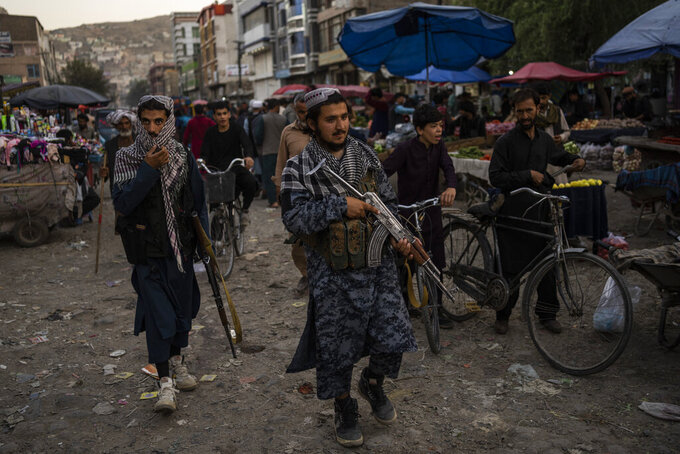 Bernat Armangue, ASSOCIATED PRESS
Taliban fighters patrol a market in Kabul's Old City, Afghanistan, Tuesday, Sept. 14, 2021. It is feared Afghanistan could further plunge toward famine and economic collapse after the chaos of the past month, which saw the Taliban oust the government in a lightning sweep as U.S. and NATO forces exited the 20-year war. (AP Photo/Bernat Armangue)

The resolution adopted by the U.N.’s most powerful body also extends the current mandate of the U.N. political mission in Afghanistan for six months and delivers a clear message that its 15 members will be watching closely what the Taliban do going forward.

The statement reflects widespread disappointment over the recently announced interim Taliban government that left out women and minorities, heralding what could be a return to harsh Taliban practices during their 1996-2001 rule.

The Taliban have promised an inclusive government and a more moderate form of Islamic rule than during their previous rule. But many Afghans, especially women, are deeply skeptical and fear a roll back of rights gained over the last two decades.

Since their sweep into power last month and the departure of the last U.S. forces after 20 years of war, the Taliban have broken up several protests by women and their supporters demanding equal rights from the new rulers.

On Friday, the Taliban ordered that all boys in grades six to 12 and male teachers to return to school and resume classes across Afghanistan, starting on Saturday — but made no mention of girls or women teachers.

Friday's Security Council resolution, drafted by Norway and Estonia, essentially delays a decision on a new mandate for the U.N. mission in Afghanistan, known as UNAMA, until March next year. At the same time, it stresses “the critical importance of a continued presence of UNAMA” and other U.N. agencies “in promoting peace and stability in Afghanistan.”

Before the Taliban takeover, the U.N. had about 300 international employees and 3,000 national staff working throughout the country. Over 100 of the international staff have redeployed to Kazakhstan, but the world body is continuing its operations in Afghanistan, where it has had a presence since 1948.

Norway and Estonia said the resolution “sends a unified message that we stand behind the U.N.’s efforts in Afghanistan going forward” and ensures that the U.N. mission can continue to monitor and report on human rights, the protection of civilians, violations and abuses against children, and support the “participation of women in all levels of decision-making.”

The resolution also calls for strengthened efforts to provide humanitarian assistance to some 14 million Afghans needing aid and demands “unhindered humanitarian access" for the U.N. and other aid agencies.

It also reaffirms “the importance of combating terrorism in Afghanistan ... and ensuring that the territory of Afghanistan should not be used to threaten or attack any country, to plan or finance terrorist acts, or to shelter and train terrorists" in the future.

Britain’s U.N. Ambassador Barbara Woodward welcomed the resolution while also expressing concern over reports “that members of the Taliban have engaged in reprisals against U.N. staff throughout the country.” She called on the Taliban to comply with Afghanistan’s obligations under international law and respect the neutrality of U.N. staff.

U.S. Ambassador Linda Thomas-Greenfield said the resolution underscores the importance of the U.N.’s work “during this critical moment" for Afghanistan. The U.N. must continue working “to serve Afghans and advance their human rights and fundamental freedoms,” she said.

Russia’s deputy U.N. ambassador, Anna Evstigneeva, expressed hope that the U.N. staff evacuated after the Taliban takeover would return soon. She expressed regret that because of objections of some council members, the resolution didn’t include assessments of threats posed by the Islamic State group in Afghanistan or of the country’s deep-rooted drug problem.

“Addressing these threats is key for maintaining stability and security in the country,” Evstigneeva said. “It is unacceptable to either neglect or play down these problems.”