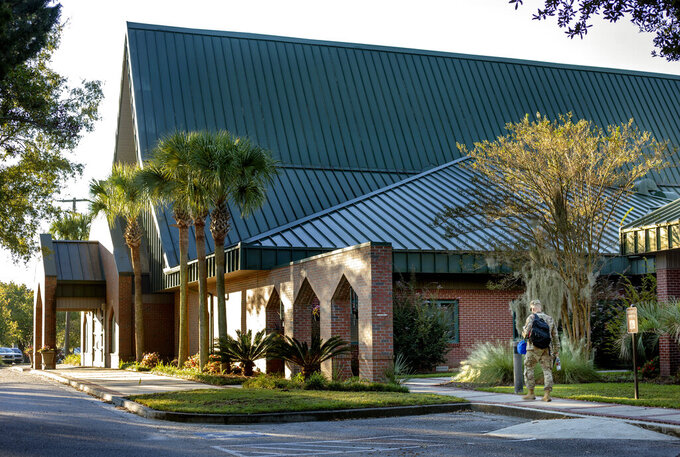 NORTH CHARLESTON, S.C. (AP) — Joan Vandawaker has to pass armed guards and show a military ID to get to church on Sunday mornings.

She could attend any number of houses of worship in the Charleston area, but going to the chapel at Joint Base Charleston is special for her. She likes to sit in the same row each week with her father, 80-year-old retired Air Force Senior Master Sgt. Albert Hoyte. As a retired Air Force officer herself, it’s a way to bond with her father each Sunday.

“I grew up going to this chapel; I began my faith journey at Joint Base Charleston,” Vandawaker said. “There are wonderful churches in the Charleston area but there’s something incredibly unique about attending a service where people understand military culture.”

An average of 50 people make up the Sunday congregation at the Protestant worship service. But attendees like Vandawaker and Hoyt are worried their weekly trip to the base may come to an end.

Lt. Col. Joel Kornegay, the senior chaplain at Joint Base Charleston, has told the congregants the number of military retirees attending has dwindled significantly over the years and there are too few active-duty airmen in attendance each week.

“We have seen roughly a 30 percent drop in attendance in our Sunday morning Protestant worship service,” Kornegay said in a statement.

Kornegay has told longtime churchgoers that participation needs to rise to warrant keeping the service time on the schedule. Some of those who have spent their lives in the church are upset at the prospect of losing it.

“We were in an uproar, we were appalled,” Hoyte said. “If one active-duty Airman attends the service, that should be enough to keep it open.”

What’s happening at the base chapel isn’t a new problem in the military or a sudden, unforeseen issue facing churches across the nation. Data shows that younger generations are not as engaged with religion in general, while older congregants are slowly passing away with fewer new members to fill their spots in pews.

Membership in most all houses of worship overwhelmingly declined last year, dropping below 50 percent for the first time in 80 years, according to a recent poll from Gallup. By the numbers, in 2020, 47 percent of Americans said they belonged to a church, synagogue or mosque, down from 50 percent in 2018 and 70 percent in 1999.

Last year saw the sharpest decline due in part to the COVID-19 pandemic putting a pause on in-person church services. Joint Base Charleston’s chapel likewise was hit hard by the virus.

“Before the pandemic, we had about 120 attendees,” Hoyte said. “After they reopened the service last year, membership dwindled to around 40.”

The base began livestreaming the Sunday services to be cautious amid the pandemic. The stream also fueled the decline of in-person attendance.

Attending chapel on a military base is unique. The services are only open to active-duty service members and military retirees with proper ID. They often bring their wives and families, and raise their children in the church.

A majority of the Charleston AFB congregants have been attending services at the chapel since the mid-1970s, after they first were assigned to Charleston. That includes service members like 87-years old David Ferguson. The 30-year military retiree was married to his second wife, Linda, at the chapel. The two have worked there cooking and preparing meals for potluck dinners, breakfasts and church picnics.

The loss of the Sunday service would mean losing a cornerstone of their social life.

“I’ve been in the service since I was 19 years old,” David Ferguson said. “I don’t know anywhere else to go if it were to close. I’d be a stranger if I went somewhere else. It wouldn’t be the same.”

Church attendance across the nation has been on a steady decline for several reasons, but the impact can be especially felt in military site worship houses where the young and single make up the great bulk of new enlistees.

“It’s always been a problem with young people attending church, when they join the service they lose that obligation to go with families and they have their freedom to go or not,” Hoyt said.

Kornegay, the base senior chaplain, has told congregants that his chaplains are stretched thin and are mainly focused on one-on-one spiritual guidance for each unit on base. Additionally, chaplains have overwhelmingly been focused on suicide prevention in the military amid an alarming number of deaths among the ranks in 2020.

The suicide rate for active-duty troops rose to 28.7 per 100,000 last year, up from 26.3 the previous year, according to the latest Defense Department report.

The numbers come amid a chaplain shortage in the military, especially among Catholic priests.

The Catholic church often has to provide incentives for priests to join the military, such as paying for half their religious education. At Joint Base Charleston, the priest on base is a contracted government employee.

While the protestant service at the chapel faces the threat of being cut, the Catholic Mass is safe at the moment.

Vandawaker said that keeping the hourlong protestant Sunday service would not be an unusual burden on the chaplains and pointed out that the protestant service could be “another important resource” for airmen who are struggling.

Air Force policy 52-101 states that Mass times and religious services are provided “in response to the validated religious needs of assigned Airmen and their authorized dependents with consideration of staff capabilities and available resources.”

The Sunday morning churchgoers are trying to recruit more active-duty families to come to the chapel on base. Ideally, they’d like to see new congregants make up around 40 percent of their congregation before the end of the year.

Congregants like Linda Ferguson are staying hopeful that attendance “will bounce back.” So far they’ve increased the number of active-duty families on Sunday from two to six.

A group of churchgoers plans to speak with Col. Marc Greene, the commander of Joint Base Charleston, next week about their concerns and their progress in recruiting new attendees.

“We feel comfortable and feel at home at that church,” Hoyte said. “We’re a big family.”