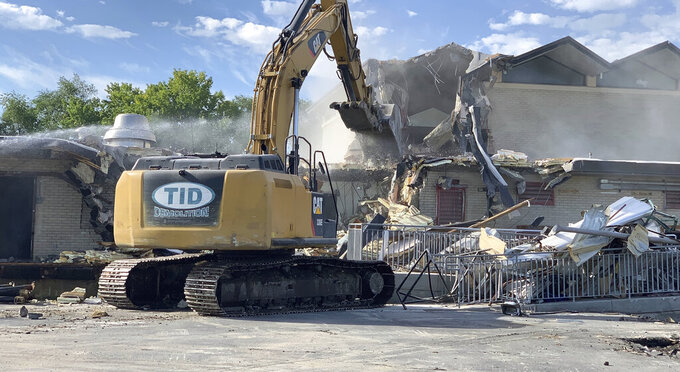 Demolition crews on Monday began work in tearing down the former long-term, secure lockup for child offenders. A backhoe knocked down brick walls and tore off the roof of a gymnasium. A stray office chair was picked up with some debris and thrown into the back of a dump truck.

The juvenile detention facility is no longer necessary.

“Because of some of the shifts in reforms in Utah in juvenile justice, this is a space where we don’t need this capacity anymore,” said Brett Peterson, the executive director of Utah’s Division of Juvenile Justice Services told Fox13. “We’re able to reinvest our dollars in serving youth in their home, schools and communities.”

It’s a result of a series of laws the Utah State Legislature passed beginning in 2017 dubbed “juvenile justice reform.” Instead of incarceration, the state has placed more of an emphasis on rehabilitation and community oversight for youth offenders. Funding has been shifted to ensure there are proper services to keep a child facing what are termed “low risk” offenses out of a detention facility.

“We were spending a lot of effort and money in some cases incarcerating or holding young people who were charged with fairly low level offenses. Sometimes contempt of court or some cases truancy, locking them up for a few days,” said Rep. Lowry Snow, R-Santa Clara, who sponsored the original bill with Sen. Todd Weiler, R-Woods Cross.

Juvenile justice reform efforts are seeing big returns, according to the data. Peterson said court referrals have decreased 35% since the laws went into effect. Incarcerations are down 50%. Millions of dollars have been diverted to services to help youth who might be at-risk.

The Utah Division of Juvenile Justice Services had actually planned to expand Wasatch Youth Center prior to the reform legislation. Peterson said it was budgeted to cost up to $90 million. Instead, the land will be given back to the state of Utah for other needs. There are still a number of detention facilities across the state.

“It does feel really good,” Peterson said, looking at the demolition. “What feels the very best? Is when I can look and see how many thousands of youth we’ve been able to serve in their homes, schools and communities, to help prevent them from entering into the system. The millions of dollars we’ve been able to save.”

The lawmaker is not done with juvenile justice legislation. He said he is currently drafting a bill that would automatically expunge the records of some juvenile offenders.

“When you have a young person get in trouble in the juvenile justice system, that record can follow them past adulthood and can interfere with applications for getting into certain professional schools, even law enforcement, a number of things,” Rep. Snow said.

He argued that even though most juvenile records are sealed, it is not enough and a lower-level crime should not haunt a child into their adult lives.

“Once a young person is past that and they can show that they’re past that? Let’s clean up their record without having them come back to court, petition the court, or having their parents pay for petitioning costs, pay a lawyer to pursue those,” Rep. Snow told FOX 13. “Let’s clean them up so they can move forward without having them being burdened by those matters of record that can continue for some time.”

That bill will be introduced in the 2022 legislative session that begins in January.