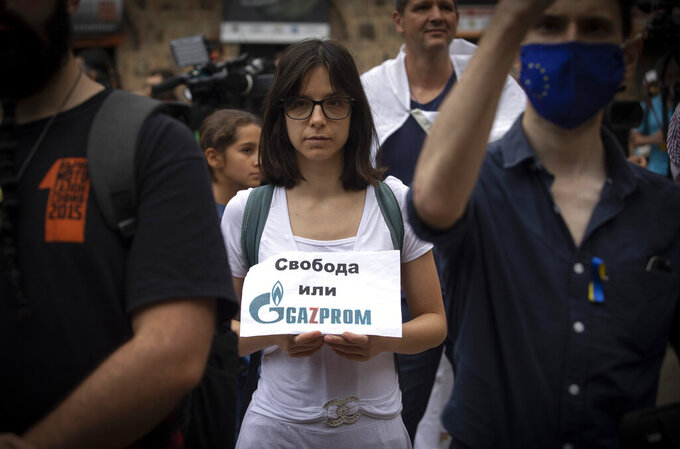 Valentina Petrova, ASSOCIATED PRESS
A protester holds a poster reading in Bulgarian "Freedom or Gazprom" during a protest rally in downtown Sofia in front of Bulgarian Presidency building on Wednesday, Aug 10, 2022. Hundreds of Bulgarians gathered to express their fear that after the pro-Western government was toppled in June allegedly because of Sofia's hard stance against Kremlin's invasion in Ukraine and its refusal to pay Gazprom in rubles, the current caretaker government could now redraw some foreign policy lines. (AP Photo/Valentina Petrova)

SOFIA, Bulgaria (AP) — Hundreds of Bulgarians took to the streets of the capital Sofia Wednesday, voicing fears that the country's caretaker government could break with the policies of its pro-Western predecessor and revert to close energy ties with Russia.

The second in a planned series of protests under the slogan #GAZwithme took place in front of the presidential building in Sofia and organizers said they want greater accountability from the caretaker cabinet.

Many in European Union and NATO member Bulgaria fear that the previous, pro-Western government was toppled in June because of its hard stance against Russia’s invasion of Ukraine and its refusal to pay Russian energy giant Gazprom in rubles, Russia's currency.

In late April, Russia cut off gas supplies to Bulgaria, the EU’s poorest nation, after it rejected Moscow's demand to pay in rubles. Relations between the two former Soviet bloc allies tanked under the previous government.

The first public statements by the current caretaker government, appointed by President Rumen Radev, indicate that Bulgaria could restart talks with Gazprom to avoid natural gas shortages later in the year.

“We refuse to be dependent on Gazprom and finance Putin’s outrageous war!” read one of the banners at the protest.

Atanas Sharkov, one of the protest organizers, called on Radev, who bears direct responsibility for the actions of the caretaker government, to guarantee that previous decisions will not be revised.

He insisted that Gazprom must cease to be Bulgaria’s only gas supplier. “It is high time to follow European policies and be part of Europe,” Sharkov said.

Last month, the leaders of Greece and Bulgaria marked the completion of a new pipeline that will supply natural gas from Azerbaijan to Bulgaria. They said commercial deliveries are expected to start by Oct. 1.