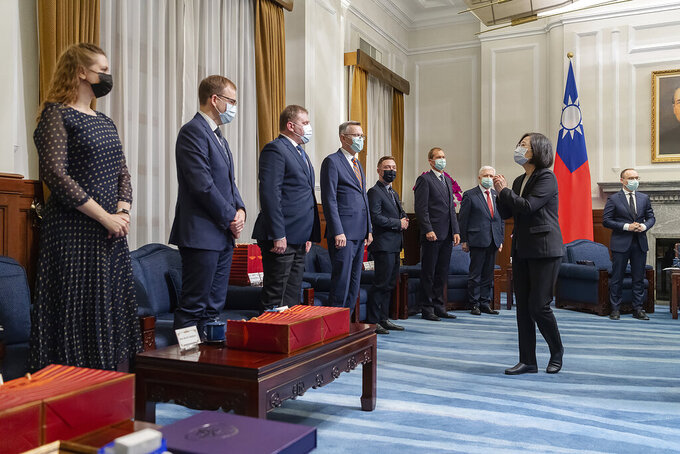 TAIPEI, Taiwan (AP) — Lawmakers from all three Baltic states met with Taiwanese President Tsai Ing-wen on Monday in a sign of further cooperation between European Union nations and Taiwan.

It is the first joint visit to Taiwan by members of parliament from Latvia, Lithuania and Estonia, Tsai said.

She welcomed the lawmakers, who are attending the 2021 Open Parliament Forum, hosted by Taiwan's Ministry of Foreign Affairs.

China claims Taiwan is its own territory and rejects any attempts by the self-ruled island to participate in international forums or establish diplomatic relations with other countries that would give it international recognition.

Tsai noted the values and experiences that Taiwan has in common with the three countries.

“Taiwan and the Baltic nations share similar experiences of breaking free of authoritarian rule and fighting for freedom. The democracy we enjoy today was hard earned," Tsai said. "This is something we all understand most profoundly.”

Matas Maldeikis, head of the Lithuanian delegation, said he hopes to see even stronger ties with Taiwan.

“We are here to express our solidarity with you. We hope the soon-to-be-open Lithuanian trade office in Taiwan will help to expand the partnership between Taiwan and Lithuania and contribute to a closer relationship with Taiwan and the whole European bloc,” he said.

China's Ministry of Foreign Affairs condemned the visit by the Baltic lawmakers on Monday, with spokesman Wang Wenbin issuing a warning.

“We urge the parties concerned to be cautious with their words and acts and to stop sending wrong signals to the Taiwan independence force,” the spokesman said.

Earlier in November, Taiwan opened a de facto embassy in Lithuania under the name of Taiwanese Representative Office. Lithuania also plans to open a representative office in Taiwan.

In response, China reduced its level of diplomatic relations with Lithuania to below ambassador level and also recalled its ambassador. Earlier, China expelled the Lithuanian ambassador from Beijing.