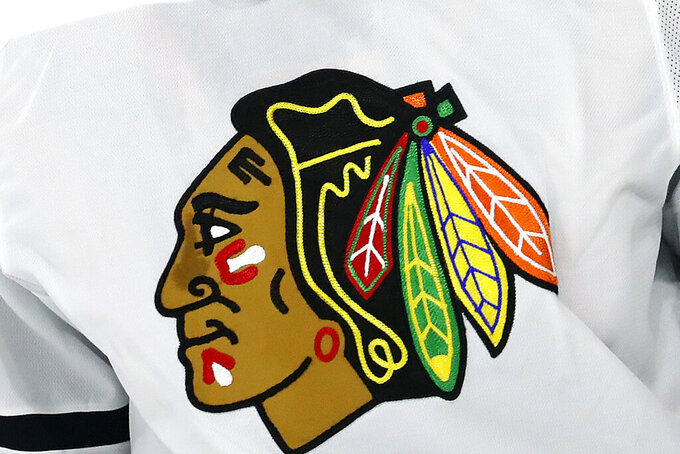 Karl B DeBlaker, ASSOCIATED PRESS
FILE - In this May 3, 2021, file photo, the Chicago Blackhawks logo is displayed on a jersey in Raleigh, N.C. The Blackhawks are holding a briefing Tuesday, Oct. 26, 2021, to discuss the findings of an investigation into allegations that an assistant coach sexually assaulted a player in 2010. (AP Photo/Karl B DeBlaker, File)

The full, 107-page report from the independent investigation of the Chicago Blackhawks sexual assault allegations from 2010 was made public Tuesday.

It describes in great detail the encounters between video coach Brad Aldrich and a player identified as John Doe who sued the team earlier this year alleging Aldrich sexually assaulted him. The report also reveals how and when team officials learned of the situation and their inaction.

Here are some excerpts from the report published by former federal prosecutor Reid Schar:

"John Doe stated, among other details, that on one occasion, during the second week of May 2010, Aldrich invited him to his apartment, provided him with dinner and drinks, told him he had the power to get John Doe onto the Blackhawks’ roster, and turned on pornography."

“On May 23, 2010, the Blackhawks’ Senior Director of Hockey Administration Al MacIsaac was told by a Blackhawks employee that there may have been a sexual encounter involving Aldrich and John Doe. MacIsaac dispatched the Blackhawks’ mental skills coach and team counselor Jim Gary to speak to John Doe to gather details of what may have happened. John Doe recalled that he told Gary the details of the encounter with Aldrich.”

“Later on May 23, within an hour after the Blackhawks won the playoff game that secured their place in the Stanley Cup Finals, five members of senior management (then-President John McDonough, MacIsaac, General Manager Stan Bowman, then-Executive Vice President Jay Blunk, and then-Assistant General Manager Kevin Cheveldayoff), along with then-head coach Joel Quenneville, and Gary, met to discuss what had been learned about Aldrich and John Doe. Accounts of the meeting vary significantly, and the participants had limited recollections of the details of the meeting. All of the participants recalled being informed that there was an incident between Aldrich and John Doe involving an unwelcome sexual advance, but, for the most part, the participants reported that they only learned about the incident at a high level — that Aldrich, a coach, tried to ‘get under the sheets’ with John Doe, a player.”

“Bowman recalled that, after learning of the incident, Quenneville shook his head and said that it was hard for the team to get to where they were, and they could not deal with this issue now.”

“Bowman did not recall anyone explicitly referencing the notion that the issue should be tabled until after the playoffs. Rather, Bowman recalled discussion about the need to find out more about what happened. Bowman further recalled that he asked McDonough what McDonough wanted to do and McDonough responded that Bowman should leave it to McDonough. Bowman stated that when the meeting ended, Bowman believed the issue was in McDonough’s hands and everyone else should focus on the upcoming Stanley Cup Finals.”

“While there was a general failure to recall how the meeting ended, Bowman recalled a statement by McDonough, the most senior member of management in the room, that he would handle the situation. Regardless of who was, or was perceived to be, responsible for handling the situation, Aldrich continued to travel and work with the team, and participate in team activities throughout the playoffs. We found no evidence that any action was taken to address the issue until after the playoffs ended.”