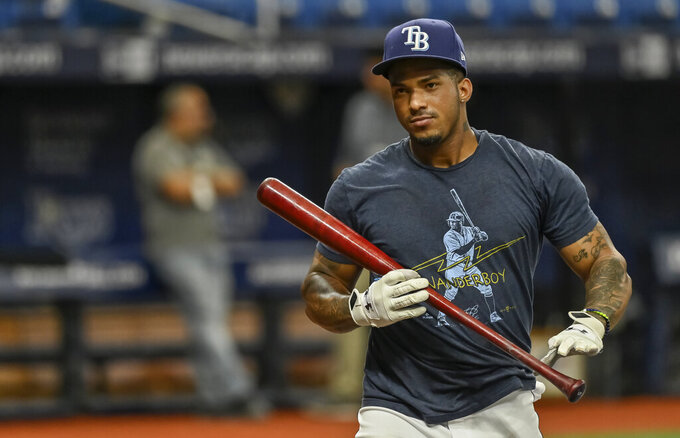 Steve Nesius, ASSOCIATED PRESS
CORRECTS TO MIAMI MARLINS NOT FLORIDA MARLINS - Tampa Bay Rays' Wander Franco steps out of the batting cage before a baseball game against the Miami Marlins, Friday, Sept. 24, 2021, in St. Petersburg, Fla. Franco is returning to action after spending time on the disabled list with a strained right hamstring. (AP Photo/Steve Nesius)

The AL East-leading Rays, who started a three-game series with Miami on Friday night, clinched a postseason spot on Thursday.

Franco was second in the lineup and started at shortstop. He walked in the sixth inning to extend his on-base streak to 40 games.

“Actually, I feel like it's my debut,” Franco said through an interpreter. “It's similar to that feeling. So, I'm ready to help the team win.”

Franco extended his on-base streak to 39 games, then exited in the first inning against Detroit on Sept. 10.

With one out, Franco lined a single. Nelson Cruz followed with a double, but Franco limped into third. After being examined by team trainers, Franco left the game and was replaced at shortstop by Joey Wendle.

The 20-year-old Franco’s on-base stretch is the second-longest in major league history by a player under 21. Frank Robinson set the record with a 43-game string in 1956.

Franco started at shortstop in a minor league game Thursday with Triple-A Durham.

Tampa Bay manager Kevin Cash said that reliever Ryan Thompson, who has been on the IL since June 30 with a right shoulder injury, will undergo thoracic outlet syndrome surgery. A date for the procedure has not yet been set,.

Reliever Matt Wisler, sidelined by right middle finger inflammation, is scheduled for a bullpen session Sunday and if all goes well could return next week.

Catcher Mike Zunino is getting extra rest with the playoffs looming, including Friday.

“A little beat up,” Cash said. “Trying to get him fresh. We'll see how the next couple days go.”

Slugger Nelson Cruz, who missed two games due to illness, was back in the lineup.