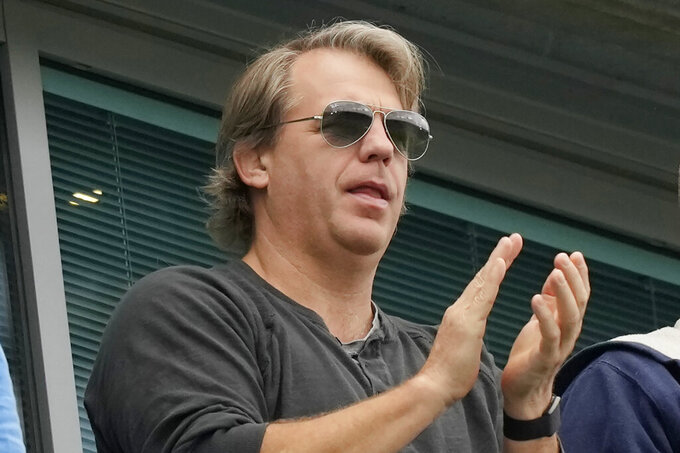 Frank Augstein, ASSOCIATED PRESS
FILE - American businessman Todd Boehly applauds during the English Premier League soccer match between Chelsea and Wolverhampton at Stamford Bridge stadium, in London, Saturday, May 7, 2022. The Premier League has approved the proposed sale of Chelsea to a consortium fronted by Los Angeles Dodgers part-owner Todd Boehly, although the U.K. government still needs to sign off on the deal before it can be completed. (AP Photo/Frank Augstein, File)

Standing by the bar in a small Stamford Bridge hospitality suite was a figure who had had not been spotted at the stadium in three years: Roman Abramovich.

Last November, the Chelsea owner was back in London at his English Premier League club to host the president of Israel. There was no obvious security entourage around the Russian billionaire and little fuss, just close associate and Chelsea director Eugene Tenenbaum.

After making small talk with guests and posing for photos with President Isaac Herzog in front of the pitch, the party moved onto an afternoon tea event for around 50 people, with scones and cucumber sandwiches.

Abramovich was feted with speeches praising his work through Chelsea to campaign against antisemitism. It looked like the gradual reintroduction of Abramovich into a more high-profile role around Chelsea again, attached to his social activism.

There was, maybe, a British visa to be regained after he withdrew his application for a renewal in 2018.

Then everything rapidly changed from Feb. 24 when Russia invaded Ukraine.

Three months later, Abramovich is being replaced as Chelsea owner by a group fronted by American investor Todd Boehly, a prospect unimaginable when the oligarch was on the field in Abu Dhabi on Feb. 9 lifting the FIFA Club World Cup.

It would turn out to be the 21st and last men’s team trophy in 19 years running the team his wealth transformed from being glamorous but only occasionally competing for the biggest trophies, into one of the most successful in European football.

Abramovich tried to cling onto Chelsea, even as anger over Russia’s unprovoked aggression toward its neighbor intensified, backed not just by loyal fans but club greats including John Terry hailing him as “the best.”

Within hours of the war beginning, Abramovich was accused in the House of Commons of having links to corrupt activity and paying for political influence in Russia. The demands grew for Abramovich to be sanctioned by the British government, which had already thwarted his efforts to regain the visa in recent years, according to a legislator.

Sensing the need to act, Abramovich offered cosmetic changes to the ownership on Feb. 26 with the pledge to relinquish “stewardship and care” of the club to its charitable foundation trustees.

They had not signed off on the plan, though, and the vague proposal did not quell the anger that a man accused of being so closely linked to Russian President Vladimir Putin could retain the ownership of a high-profile status symbol in the heart of London.

Another public play to shield his reputation from Putin’s war came on Feb. 28 when Abramovich’s PR pushed an apparent move for him to broker peace. Abramovich did not condemn the war, and he has yet to do so despite talking about the need to publicly condemn atrocities only two days before the invasion. The rare comments came in a statement launching a new partnership backing the Jerusalem-based Holocaust museum.

“Yad Vashem’s work in preserving the memory of the victims of the Holocaust,” Abramovich said, “is instrumental to ensure that future generations never forget what antisemitism, racism and hate can lead to if we don’t speak out.”

Yet, Abramovich never has practiced what he preached, even as Putin framed the war as one of denazification, falsely called the Ukrainian leadership “Nazis” despite President Volodymyr Zelenskyy being Jewish, and areas were reduced to rubble by Russian bombing and shelling. Yad Vashem suspended its partnership with Abramovich, as did the Imperial War Museum in London, where he funded a Holocaust exhibition and which hosted an event for him hours after the start of Russia’s war on Ukraine.

It was only six days into the invasion when Swiss billionaire Hansjorg Wyss leaked that Abramovich was actually trying to quickly dispose of Chelsea and the club was publicly put up for sale.

“I hope,” Abramovich said, “that I will be able to visit Stamford Bridge one last time to say goodbye to all of you in person.”

A week later, any immediate hopes of returning to London were ended by the government. Sanctions and travel restrictions were placed on Abramovich, his assets were frozen, and Chelsea was allowed to operate only under the terms of a government-issued license until the end of May.

New match tickets couldn’t be sold by Chelsea. Players couldn’t be handed new contracts. Even merchandise stores had to close.

The job of finding a buyer for Chelsea was placed with the New York-based Raine Group merchant bank. An array of prospective investors went public, some seemingly more viable owners than others, before the bank produced a shortlist of four bidders in early April.

The sale ended where it began with Wyss.

The Raine Group -- working with Abramovich’s associates on the board leading Chelsea — eventually selected the group featuring Wyss and fronted by Boehly, part-owner of the Los Angeles Dodgers, with investment from Clearlake Capital.

The sale price was 2.5 billion pounds ($3.2 billion), the most ever for a team in world sports, with the proceeds having to go to a foundation supporting Ukrainian victims of the war. Boehly also had to pledge to invest 1.75 billion pounds ($2.2 billion) in the coming years in the teams and infrastructure.

The final stage of the process encapsulated how laced in politics the process was with approval needed from the British and European authorities that sanctioned Abramovich, ensuring he would not profit from the sale.

It was an unceremonious end to his 19 years as owner.

After buying Chelsea for 140 million pounds in 2003, Abramovich ended up with nothing. Not even a return of the 1.6 billion pounds of loans he had to write off to allow the club to be sold and continue playing.

It was never about money for Abramovich, though. More about status and winning trophies.

“In hindsight, especially with the public profile it would bring me, maybe I would have thought differently about owning a club,” Abramovich was quoted as telling Forbes a year before losing control of Chelsea. “But, at the time, I just saw this incredible game, and that I wanted to be a part of that in one way or another.”

No more, in England at least.

Ultimately, though, the association with Putin that Abramovich spent so long trying to distance himself from cost him the ability to retain the ownership of Chelsea.