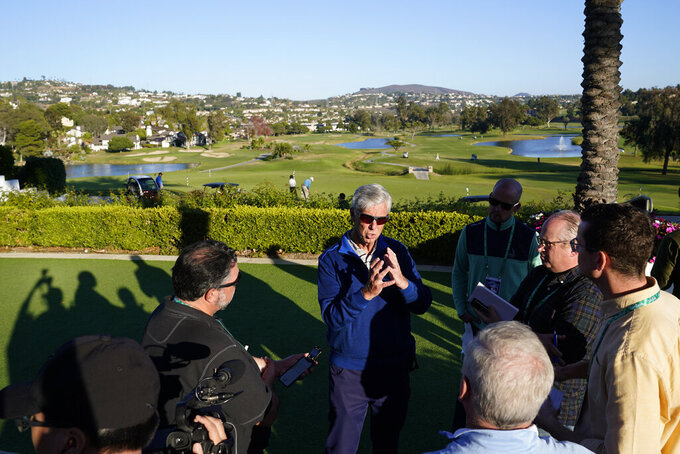 CARLSBAD, Calif. (AP) — If the universal designated hitter returns to the National League for good next season as many people believe, don’t be looking for the role to be filled with prototypical aging superstars who no longer play a position.

While some teams might need to do some adjusting to fill a DH roster spot, many other clubs will roll right into the new era using a number of players whose bats can stay in the lineup as a DH while they get a rest from playing the field.

It’s just that some general managers wouldn’t mind knowing sooner rather than later as they begin putting together rosters for next season. With labor uncertainty looming, the universal DH likely will be one of the last items determined in a new collective bargaining agreement as part of a compromise between owners and the players' association during negotiations.

One of those GMs is Alex Anthopoulos of the World Series champion Atlanta Braves.

The Braves acquired four outfielders in July after star outfielder Ronald Acuña Jr. suffered a season-ending knee injury. Three of those players — Joc Pederson, Eddie Rosario and Series MVP Jorge Soler — are free agents, and the DH uncertainty might affect how many the Braves try to bring back or replace.

“We know that we have (Adam) Duvall and Acuña under control. So I would think we are likely to sign or trade for some type of outfielder. But I’m not sure yet, I guess,” Anthopoulos said. "I think we’re waiting to see how some things go. Is there going to be a DH or not? Things like that.

“I think we have to assume, like anything, like we did last year, right now, we deal with it with the rules that we have."

If the DH does come to the NL for good — it was used for the 2020 pandemic-shortened season — teams believe there will be several ways to fill the position.

“I think if you can have a David Ortiz, every team in baseball will take a guy like that, right?" Anthopoulos said. "And if not, then people like to move guys in an out and so on, so it all depends. I think just like anything else, I think it all depends on the player.”

Anthopoulous wasn’t the only executive to mention Ortiz, the former Boston Red Sox star. Chicago Cubs president of baseball operations Jed Hoyer was an assistant GM in Boston for several seasons as Ortiz became a superstar.

“When you have a guy like that, it makes it really easy,” Hoyer said. “If you don’t, it’s a question of whether you have someone just locked in or whether you rotate guys through to get off their legs.”

Washington Nationals GM Mike Rizzo doesn’t anticipate having to scramble if the universal DH is adopted.

“There’s a lot of ways to skin a cat, and you can build your roster whatever way you see fit with the personnel that you have,” Rizzo said. “There’s a whole bunch of different ways to attack the DH question.”

The AL has had the DH since 1973. With the advent of interleague play in 1997, AL pitchers have had to hit when playing in NL parks.

Oakland Athletics GM David Forst said his NL counterparts shouldn’t have any problem filling the DH spot if it’s adopted. He also said interleague games at NL ballparks will be more enjoyable for him.

“My first thought if the NL has the DH is, thank God our pitchers don’t ever have to hit again,” Forst said. “I mean there’s a lot of ways to fill that spot. You’re seeing fewer and fewer teams have a dedicated designated hitter. A lot of teams are valuing the versatility on their roster.”

Although Houston has been in the AL since 2013, a universal DH might dampen manager Dusty Baker’s enthusiasm during interleague play. Baker managed for 22 years in the NL before taking over the Astros in 2020.

“I have not seen Dusty Baker as happy as he was when he was managing in NL parks,” Astros GM James Click said. “Dusty really loves the National League game, and so from that perspective, if there’s a universal DH I think he’ll be fine, but he made no secret about the fact he was very excited to be managing in some National League parks last year.”

And then there was Astros pitcher Zack Greinke, who hit a single during his Game 4 start at Atlanta and then became the first pitcher to record a pinch hit in the World Series since 1923 when he singled in Game 5.

“I enjoyed watching Zack Greinke hit as much as anybody,” Click said. “That was a lot of fun. It’s just a different game. I don’t think too hard about it one way or the another, either way, just as long as they let us know what rules we’re playing under.”