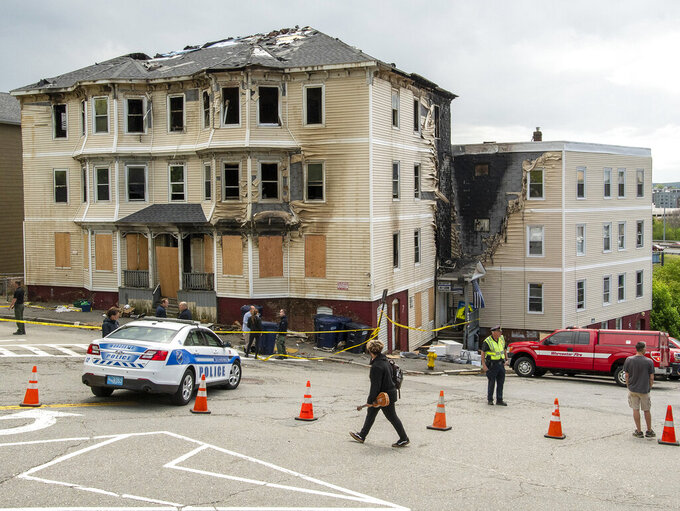 Rick Cinclair, ASSOCIATED PRESS
FILE - Officials investigate the scene of a fatal fire, Tuesday, May 17, 2022 in Worcester, Mass. One of the four people who died in a fire at a Massachusetts apartment building last weekend had filed a defamation lawsuit against right-wing radio host Alex Jones and his InfoWars website in 2018, alleging they falsely identified him as the gunman in a massacre at a Florida high school. A lawyer for 29-year-old Marcel Fontaine confirmed Thursday, May 19, that his client died in Saturday's fire in Worcester. (Rick Cinclair/Worcester Telegram & Gazette via AP)

One of the four people who died in a fire at a Massachusetts apartment building last weekend had filed a defamation lawsuit against right-wing radio host Alex Jones and his InfoWars website in 2018, alleging they falsely identified him as the gunman in a massacre at a Florida high school.

Authorities in Worcester, Massachusetts, released the names of the victims of last Saturday's blaze on Wednesday, including Marcel Fontaine, 29. The others were Joseph Garchali, 47; Christopher Lozeau, 53; and Vincent Page, 41. Fontaine and Garchali lived in the same unit.

Fontaine sued Jones, InfoWars and an InfoWars reporter in Texas in 2018. The complaint said InfoWars posted his photograph on its website the day of the shooting in Parkland, Florida, depicting him as the gunman at Marjory Stoneman Douglas High School, where 17 people died. Nikolas Cruz pleaded guilty last October.

The suit said Fontaine had never been to Florida and suffered “harassment and peril even from individuals aware of his identity as a Massachusetts resident but who nevertheless remain convinced he was part of a horrifying conspiracy." Fontaine sought unspecified damages.

One of Fontaine's lawyers in the Texas case confirmed that his client had died in the Massachusetts fire.

“Marcel was an immensely brave young man who made the choice to stand up to Alex Jones while knowing the harassment he would face," Mark Bankston said in an email Thursday.

The case is still pending and will continue on behalf of Fontaine's estate, he said. Lawyers for InfoWars have countered in court documents that Fontaine has failed to show any evidence of malice or any injury because of his photo's publication.

“His decision to bring a lawsuit caught the attention of several Sandy Hook parents, who approached our law firm to bring similar suits against Jones. It is because of Marcel that Mr. Jones finally faces accountability for his mayhem," Bankston said.

The Worcester blaze was reported at about 3:30 a.m. Saturday and crews were on the scene within three minutes, acting Fire Chief Martin Dyer said earlier this week. Two victims were found Saturday and two more victims were recovered Monday.

The search was slowed by concerns about the integrity of the heavily damaged structure, including a collapsed roof, and the discovery of several live snakes still inside on Sunday, which required the intervention of animal control officers.

Four residents also required hospitalization, including one who either fell or jumped from a third-floor window, Dyer said. About 20 people lived in the building.

The cause of the fire in the three-story, six-unit apartment remains under investigation with the aid of the federal Bureau of Alcohol, Tobacco, Firearms, and Explosives.

This story has been corrected to show that the Sandy Hook school shooting happened in 2012, not 2014.