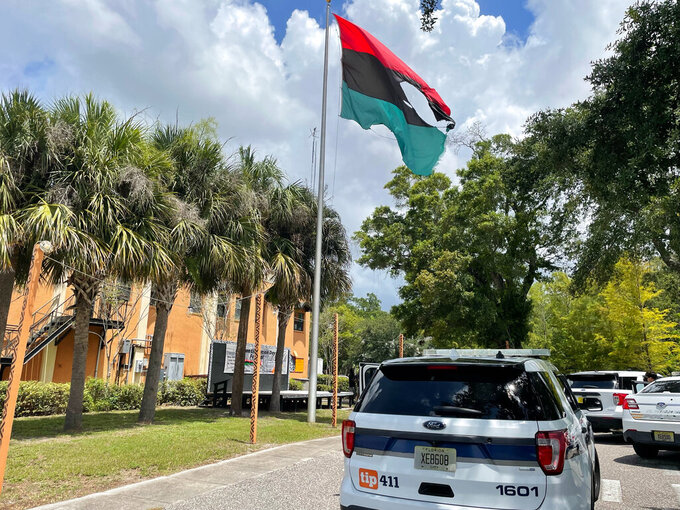 Uncredited, ASSOCIATED PRESS
In this photo provided by Burning Spear Media, LLC, a damaged Pan-African flag flies outside the headquarters of the Uhuru Movement, a Black international socialist group based in St. Petersburg, Fla., Saturday, July 2, 2022. Earlier in the day, person using a flamethrower set fire to the flag. (Burning Spear Media, LLC via AP)

ST. PETERSBURG, Fla. (AP) — A person using a flamethrower set fire Saturday to a Pan-African flag flying on a pole outside the headquarters of the Uhuru Movement, a Black international socialist group based in Florida.

Security video released by the group shows the driver of a white Honda sedan pulling up outside the group's St. Petersburg headquarters, removing a flamethrower from the trunk and shooting a tower of fire at the flag flying about 30 feet (9 meters) above the ground. The group says the man stopped when a worker inside the building yelled at him. The video shows him putting the flamethrower back in the trunk and then driving away. A photo supplied by the group shows the flag with a large hole.

St. Petersburg police said they are investigating the fire and are working to identify a suspect.

The Uhuru Movement is part of the African People’s Socialist Party, which says it is “uniting African people as one people for liberation, social justice, self-reliance and economic development.”

Akile Anai, the group's director of agitation and propaganda, said the attack is in the same vein as the May killing of 10 Black people at a Buffalo, New York, supermarket. Police say the arrested suspect in the Buffalo massacre is a white nationalist.

Anai said such attacks are caused by the decline of a “social system and facade of normalcy based on oppression, colonialism and exploitation.”

This story has corrected the spelling of Akile Anai’s last name.