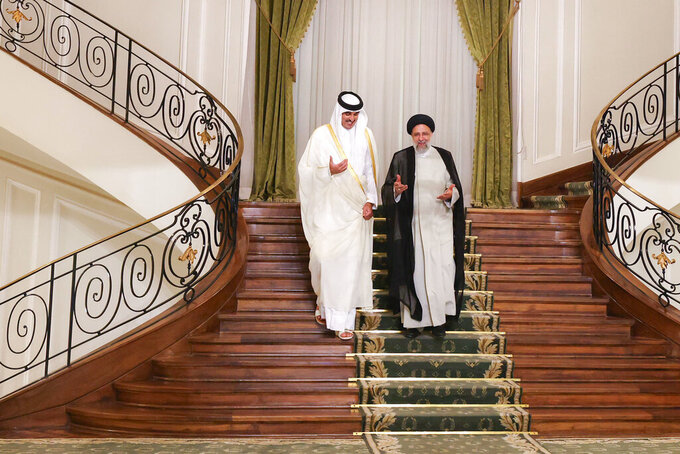 Uncredited, ASSOCIATED PRESS
In this photo released by the official website of the office of the Iranian Presidency, President Ebrahim Raisi, right, and Qatari Emir Sheikh Tamim bin Hamad Al Thani arrive for their joint press briefing at the Saadabad Palace in Tehran, Iran, Thursday, May 12, 2022. Qatar's emir arrived in Tehran for talks with the Iranian president as efforts to save Tehran's tattered nuclear deal with world powers hit a deadlock. (Iranian Presidency Office via AP)

TEHRAN, Iran (AP) — Qatar’s emir met with Iranian leaders on Thursday, offering support for efforts to revive the nuclear deal between Tehran and world powers, even as talks on the tattered accord remain deadlocked.

Despite its small size, the tiny Gulf Arab sheikdom plays a strategic role as a quiet mediator and negotiator in a region rife with sectarian and political conflict. Qatar’s ties with both Washington and Tehran allow Doha to relay viewpoints between the two.

“We believe that negotiation is the solution of the problem,” the official IRNA news agency quoted visiting Sheikh Tamim bin Hamad Al Thani as saying after meeting President Ebrahim Raisi. The two also discussed a range of other issues, including Afghanistan, Iraq, Syria and the war in Yemen.

Raisi seized the opportunity to slam Western nations, insisting that their presence is not “providing security in the region" but “harming the security.” Iran sees the presence of U.S. forces in neighboring countries — on its doorstep — as a threat.

Raisi described Sheikh Tamim's one-day visit to Tehran as a turning point in relations between Iran and Qatar.

Later in the day, Iran’s Supreme Leader Ayatollah Ali Khamenei who has final say on all state matters, said during his meeting with the emir that their two nations should significantly boost their economic and political ties. But Khamenei also urged the Arab world and particularly Qatar to offer more support for the Palestinian cause in its conflict with Israel, an archenemy of Iran.

The emir's visit came as the European Union’s coordinator on nuclear talks, Enrique Mora, was still in Iran. The talks in Vienna have been stalled for months, apparently over an Iranian demand that Washington lift a terrorism designation on Iran’s powerful paramilitary Revolutionary Guard.

In Paris, France’s Foreign Ministry said Thursday that two French nationals have been arrested in Iran and French authorities have “fully mobilized” to secure their swift release. Workers Force trade union identified the two as Cecile Kohler, a teachers’ union official, and her partner. It said they were on a tourist trip to Iran as part of an Easter vacation. The union said it was made aware of the arrests Wednesday.

The French government condemned “this groundless arrest” and calls for immediate release of the two. France did not say what charges the two face.

Another French citizen, Benjamin Briere, was sentenced in January by Iran to over eight years in prison for espionage, for photographing “prohibited areas” with a drone in 2020 during what he said was a tourist visit in the north of the country.

The emir, who will visit Europe soon, hosted Raisi in February.