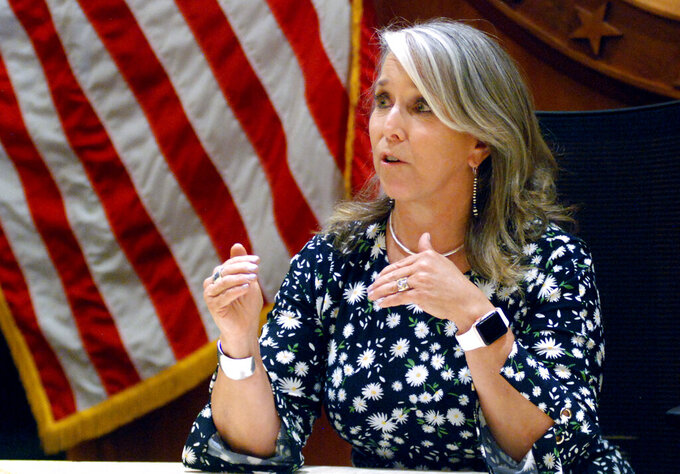 Morgan Lee, ASSOCIATED PRESS
FILE — In this July 29, 2021, file photo New Mexico Gov. Michelle Lujan Grisham speaks at a news conference in Santa Fe, N.M. The final price tag for a settlement reached by Grisham and a former campaign spokesman is now $150,000. The latest round of payments to settle accusations of harassment are being disclosed in a mandatory campaign finance report that the Democrat's campaign filed Monday, Oct. 11, 2021. (AP Photo/Morgan Lee, File )

Opposition political committee Stop MLG highlighted the original $25,000 donation to the Lujan Grisham campaign from Denver-based Intrepid Potash. New Mexico caps campaign contributions to candidates at $20,800 in the course of a four-year election cycle. Excess contributions were returned, according to a spokeswoman for the campaign.

Intrepid Potash is a Denver-based mineral company that employs about 280 people in New Mexico, primarily at Carlsbad. It uses water rights to sell water to support oil and natural gas development in the Permian Basin and also provides a potassium-rich salt to oil producers and other industries, according to corporate filings with the U.S. Securities and Exchange Commission.

Intrepid Potash is invested in state mining and grazing leases. It has a petition pending before the state Supreme Court to defend water rights on the Pecos River in southern New Mexico that are leased to other companies for use in the oil and gas industry, after a coalition of rural water users prevailed in state district court.

Lujan Grisham, a former congresswoman, is seeking a second term as governor in the 2022 election.

Her campaign received roughly $2.5 million in campaign contributions over the past six months from an array of individuals, labor unions, political committees and businesses.

A crowded field of at least seven contenders are pursuing the Republican nomination.