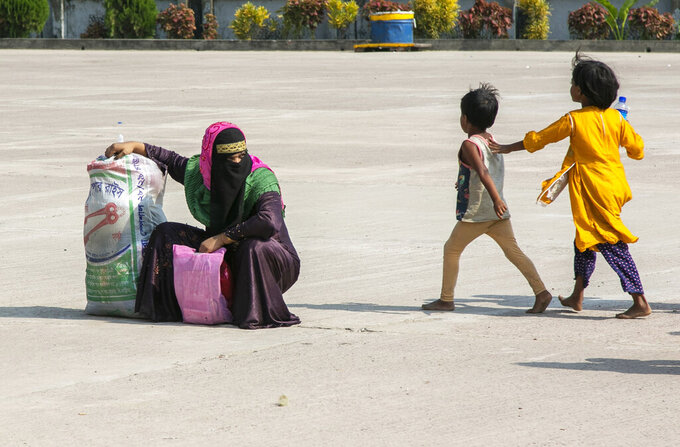 Uncredited, ASSOCIATED PRESS
A Rohingya refugee rests as children walk past her as they wait to board a naval vessel that will take them to Bhasan Char island, in Chittagong, Bangladesh, Thursday, Nov. 25, 2012. Thousands have been relocated on the island in the Bay of Bengal from crammed camps near the Myanmar border. (AP Photo) 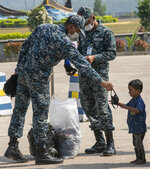 DHAKA, Bangladesh (AP) — Bangladesh on Thursday began relocating hundreds of Rohingya refugees to an island in the Bay of Bengal, despite ongoing concerns from rights groups over the conditions on the vulnerable low-lying island and that no refugees should be sent forcibly.

The Rohingya are a Muslim ethnic group, over 700,000 of whom fled persecution and violence in neighboring Myanmar in August 2017. Bangladesh has been sheltering 1.1 million of the refugees in crowded camps near its coast.

A U.N.-sponsored investigation in 2018 recommended the prosecution of Myanmar’s top military commanders on charges of genocide, war crimes and crimes against humanity for the violence against the Rohingya.

A senior Bangladeshi official overseeing the relocation, Mohammad Shamsud Douza, said that a navy ship would take 379 refugees from Chattogram city to the Bhashan Char Island which lies off the country's southeastern coast.

“They are going there voluntarily. All the 379 refugees have chosen to live there for a better and secure life,” he told The Associated Press.

"Authorities will take care of everything— from food to medicine,” he added.

The government began sending Rohingya refugees to the island eleven months ago, and says it can now accommodate up to 100,000.

Crime and security concerns have become a major issue in the sprawling camps at Cox’s Bazaar. In September, the killing in a gun attack of an international representative of the Rohingya refugees underlined the lack of security.

“We are moving to Bhasan Char after talking to the camp officials,” said Mohammed Abdul Hashim, a refugee as he left for the island on Thursday. Hashim said insecurity in the camps was rising, with many living in fear of criminal groups.

It was not clear when the next batch will travel to the island.

The government says the relocation is a temporary arrangement and eventually they will have to return to their home country in Myanmar, although Prime Minister Sheikh Hasina has also said she will not force the refugees to return.

In October, the U.N. signed an agreement with Bangladesh's government to facilitate sending refugees to the island. The U.N. and other groups had earlier criticized the relocation, saying the island, which is regularly submerged by monsoon rains, was not fit for habitation. The government has spent more than $112 million on development, adding sea walls, hospitals, schools and mosques.

The U.N. agreement allows for close cooperation between the international body and the government to supply services and aid for the island’s residents.

Rights groups, however, have continued to express concerns over the plans. This week, the International Federation of Red Cross urged in a statement that urgent action was needed to protect the refugees from cyclones and the COVID-19 pandemic on Bhashan Char Island. It said Bangladesh's Red Crescent has been working directly with the refugees so that lifesaving measures are in place ahead of the next big cyclone, as big storms regularly threaten the Bay of Bengal from September until December.

It said vaccinations have been underway for people aged over 55 on the island, and more doses are due for the remaining adults.

The Rohingya are not recognized as citizens in Buddhist-majority Myanmar, rendering them stateless, and face other forms of state-sanctioned discrimination and violence.