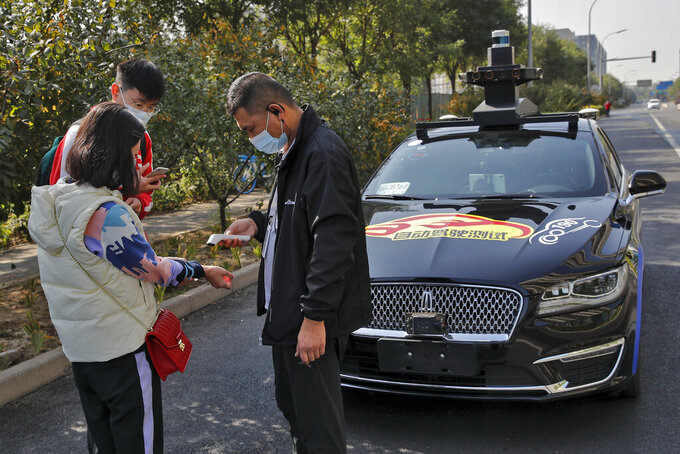 Andy Wong, ASSOCIATED PRESS
A couple wearing face masks to help curb the spread of the coronavirus gets temperature check before they try out the self-driving ride-hailing services by tech giant Baidu on the outskirts of Beijing on Oct. 15, 2020. Chinese leaders are shifting focus from the coronavirus back to long-term goals of making China a technology leader at this year's highest-profile political event, the meeting of its ceremonial legislature, amid tension with Washington and Europe over trade, Hong Kong and human rights. (AP Photo/Andy Wong)

BEIJING (AP) — Chinese leaders are shifting focus from the coronavirus back to long-term goals of making China a technology leader at this year's highest-profile political event, the meeting of its ceremonial legislature, amid tension with Washington and Europe over trade, Hong Kong and human rights.

The National People's Congress, which opens Friday, has no real power. But the ruling Communist Party uses the gathering of 3,000-plus delegates to showcase economic and social plans. The party-appointed delegates, who don't represent the public, endorse decisions already made by party leaders.

The NPC usually focuses on domestic issues but those increasingly are overshadowed by geopolitics, including a feud with Washington over technology and security. In October, party leaders declared that making China a self-reliant “technology power” is this year's economic priority.

Chinese leaders were rattled after Washington cut off access to U.S. processor chips and other inputs needed by telecom equipment giant Huawei and some other companies. That threatens fledgling industries seen by Beijing as a path to prosperity and global influence.

During the congress, leaders will announce closely watched spending plans for the People’s Liberation Army. Last year’s official budget was $178.6 billion, the second-largest after the United States, but outside experts say total spending is up to 40% more than the reported figure.

Xi's government also is encouraging Chinese exporters to focus more on domestic markets in response to Washington's tariff hikes on goods from China.

The congress, to be held mostly by video link to keep Chinese leaders, delegates and reporters separated as an anti-virus measure, provides a platform for announcing initiatives aimed at tightening control over Hong Kong.

Last year’s session endorsed a national security law for the semi-autonomous territory in response to pro-democracy and anti-government protests. A senior official has called for changes to its tightly controlled electoral system to make sure Hong Kong is led by what Beijing calls patriots.

Legislators are due to endorse the party’s latest five-year development blueprint, which takes effect this year.

The ruling party has spent heavily over the past two decades to build up China’s fledgling suppliers of semiconductor, solar, aerospace and other technology. But its smartphone manufacturers and other industries still need U.S., European, Japanese and Korean processor chips and other advanced components.

That campaign took on added urgency after then-President Donald Trump slapped sanctions on Huawei Technologies Ltd. and some other companies starting in 2018.

China is evolving from lower-value manufacturing to "technology intensiveness," said Zuo Xiaolei, an economist in Beijing. She said that, coupled with stronger consumer spending, could help foreign economies by boosting imports.

On Monday, the industry minister, Xiao Yaqing, called for efforts to “effectively safeguard China’s economic security” in the face of “fierce international competition.”

China needs to develop an “independent and controllable” supply chain, Xiao said, a reference to official pressure on manufacturers to use more domestically produced components and technology, even if they cost more.

Xiao cited integrated circuits, next-generation telecoms and electric cars as priorities, according to the Shanghai news outlet The Paper.

China needs to “speed up development of the digital economy,” Xiao said at a news conference.

The party also is expected to present more details of plans to meet targets for having China’s carbon emissions peak by 2030 and achieve neutrality by 2060. The party has promised repeatedly to develop a clean, energy-efficient “green economy."

China has been the world’s biggest carbon emitter since 2005, making whatever it chooses to do critical to reining in global warming. China still gets almost 60% of its power from coal.

“This is the area that poses a great challenge,” said Citigroup’s Liu. The 2030 target means “this very high dependence on coal will have to decline drastically.”

On Friday, investors will watch whether Premier Li Keqiang, the top economic official, announces an annual growth target. The target officially is just a budget tool, but leaders have sought to reassure consumers and entrepreneurs by promising to meet it.

Last year, the party declared it had met its goal of doubling economic output from 2010 levels, which required annual growth of about 7%. Xi says the next target is to double output again by 2035, a longer period that would allow growth closer to 5%, still among the highest for any major country.

Li skipped announcing a target last year due to the pandemic. The premier and other leaders say consumer spending and other indicators are more important, but analysts say they might feel pressure to show the economy is back on track by setting a formal target.

After last year's multi-decade-low 2.3% growth, forecasters say it would be easy to hit 7% as manufacturing and spending rebound.

"Growth will not be what the government is most concerned about," said He Fan, an economist at Shanghai Jiaotong University. After last year's crisis, he said, leaders now “care about effectiveness and safety.”