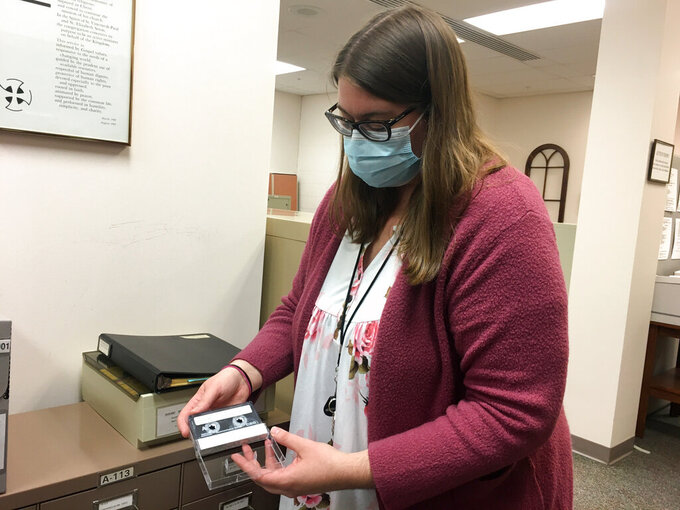 Jeff Himler, ASSOCIATED PRESS
Casey Bowser, archivist for the Sisters of Charity of Seton Hill in Greensburg, Pa., shows one of the aging cassette tapes on Sept. 29, 2021, that have been transferred to digital files to preserve oral history interviews of members of the community of religious women. (Jeff Himler/Pittsburgh Tribune-Review via AP)

GREENSBURG, Pa. (AP) — Sister Francis Louise Honeychuck helped her mother clean a casket factory in Scottdale and watched over the two youngest of her five siblings after her father died in the 1918 flu pandemic, just before she turned 4.

“I recall picking up oodles of straight pins off the chairs, floor, anywhere,” she told an interviewer in 2004, remembering her childhood as Emma Marie Honeychuck, before she entered the Sisters of Charity of Seton Hill in Greensburg, in 1932. “They had been dropped by the ladies who used the pins to make … silk lining inside the coffins.”

Sister Francis Louise, who died in 2017, is among 100 members of the Greensburg-based community of women religious whose first-person stories have been preserved and can now be explored online.

Casey Bowser was hired as the community’s archivist in 2017. She has overseen development of its oral history website, digital conversion of interview tapes and continuation of the interview process, assisted by her predecessor as archivist, Sister Louise Grundish.

“These histories have great value in terms of individuals studying religious communities, women’s history, Catholic history, education and health care,” said Bowser. “It’s a really rich source of that history, especially when you’re hearing a sister’s own words and her own experience.”

Each of the online “sister spotlights” includes a photo, a biographical sketch and an audio file. Some also include written transcripts of the audio interviews.

Adjacent Seton Hill University was founded by the Sisters of Charity and received its charter in 1918. Bowser noted Seton Hill alumni are among those who may discover stories that speak to them by searching the oral history site.

“During 2018, when the university was celebrating its 100th anniversary, we interviewed a number of sisters who were professors or administrators at the university,” Bowser said.

Sister Francis Louise made her own mark in education. She taught in 1934-1937 at a Catholic school in Pittsburgh and was among those evacuated during the 1936 St. Patrick’s Day flood. She learned Braille and later helped develop and oversee services for blind children at Pittsburgh’s De Paul Institute — which the Seton Hill sisters helped to found in 1908, to focus mainly on instruction of hearing-impaired children.

The oral history project also underscores the Seton Hill sisters’ commitment to social justice, through their friendship since 1921 with the Sisters of the Holy Family of New Orleans, a community of Black women religious founded by a free woman of color in 1842. Beginning with education of enslaved people in its first decades, its services have included operating schools, a day care center and a nursing facility.

The late Sister Mary Janet Ryan, who was a history professor at Seton Hill from 1965 to 1979, was among Greensburg sisters who provided instruction to their counterparts in New Orleans, who were unable to complete their education at southern universities under Jim Crow laws.

“Six sisters went to New Orleans every summer from 1921 until 1958,” Grundish said. Sister Mary Janet “was there during the late ’50s. She was one of our last sisters to serve there. That’s when she had an incident on a bus.”

As noted in the sister’s oral history entry, “She was wanting to give up her seat for a Black individual and was getting some scorn for that and being derided by some people,” Bowser said. But, “She stood her ground and said, ‘This is wrong.’”

Over the years, the Greensburg sisters provided 19 of the New Orleans sisters scholarships to attend Seton Hill. In return, the Sisters of the Holy Family sent one of their number to teach at Seton Hill.

The Seton Hill sisters helped drum up financial assistance in Southwestern Pennsylvania to help rebuild the Holy Family community’s buildings that were destroyed by Hurricane Katrina. Grundish was among those who “drove around to all the meetings of the Ladies Ancient Order of Hibernians.”

Among Bowser’s goals for the Sisters of Charity archives are adding more oral histories to the website while recording and transcribing additional interviews.

She’s received help with those tasks from students at Seton Hill and at Saint Vincent College in Unity, where she has taught courses on public history, oral history and archives in the digital age. With the arrival of the covid-19 pandemic last year, interviews had to be conducted remotely, using the Zoom platform.

The sisters’ stories would have been lost but for their foresight in committing their memories to tape in the first place. Some made their own recordings, but many of the tapes resulted from interviews conducted over 35 years by Sister Marie Corona Miller, who died in December, at 85.

“She was so dedicated to the project,” Bowser said. “It would be a great disservice if we did not continue this.”

The sisters began the process of transcribing the recorded interviews, including some that were made beginning in 1951 using reel-to-reel tapes. All together, Bowser said, interviews with more than 300 sisters have been captured, many of them on cassette tapes dating back to the late 1970s and early 1980s.

Realizing the fragility of some of the older cassettes, which typically have a lifespan of 30 years, Bowser and Grundish applied for and received a $30,000 grant from the Council on Library and Information Resources. That allowed the sisters to contract with the Massachusetts-based Northeast Document Conservation Center to convert 25 reel-to-reel tapes and 165 of the oldest cassettes to digital files.

The oral history project is an ongoing effort, Bowser said. She noted there is some urgency to complete interviews with about 40 members of the Seton Hill community since the sisters have an average age range in their 80s.

“The history goes on, and we’re trying to preserve it, day by day, step by step,” she said.

A selection of the digital “sister spotlight” entries preserved from the Seton Hill archives are now included in a new online compilation of oral histories of members from Sisters of Charity communities across the country and beyond.

Called “Charity Speaks,” it can be viewed at scfederationarchives.org — the searchable archive of the Sisters of Charity Federation of North America.

Development of the website is ongoing, according to Casey Bowser, archivist for the Sisters of Charity of Seton Hill in Greensburg.

“The stories contained within these records encompass more than just religious life,” she said. “They provide a unique window into womanhood, Catholic family life, 20th century social and political issues, regional and institutional histories and much more.”