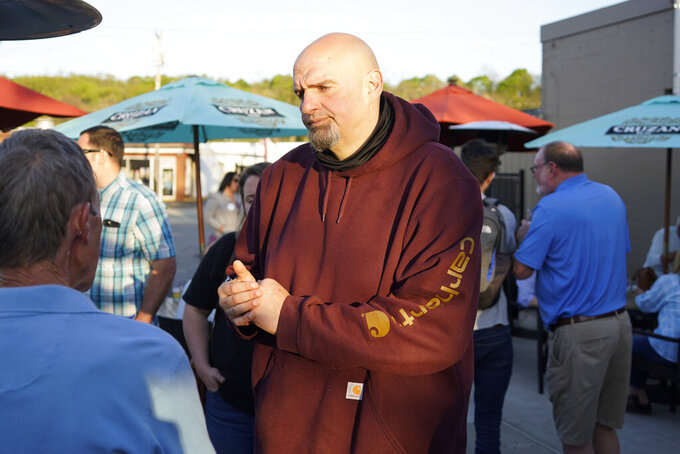 HARRISBURG, Pa. (AP) — In his first media interview since having a stroke two months ago, Democratic Senate nominee John Fetterman of Pennsylvania said Wednesday he is “100% able to run fully and to win" against Republican Mehmet Oz in November.

Fetterman, speaking over video with a Pittsburgh Post-Gazette reporter, disclosed for the first time that he is having lingering, sporadic difficulties with hearing and speaking. But Fetterman, 52, insisted he has “no physical limits,” noted he is working with a speech therapist and said he would not run if he thought he could not endure the demands of a campaign.

“I would never be in this if we were not absolutely, 100% able to run fully and to win — and we believe that we are,” Fetterman, the current lieutenant governor, told the newspaper.

Fetterman's health has been a dominant issue in the Senate race since the days before the May 17 primary, when his campaign revealed that he had a stroke. He required surgery to implant a pacemaker with a defibrillator, and later disclosed that he also had a serious heart condition.

He has stayed off the campaign trail while he recovers but told the newspaper that he expected to return “very soon” to making public appearances. On Thursday night, he was scheduled to appear in person at a fundraiser with Democratic Jewish Outreach Pennsylvania in suburban Philadelphia. The event will not be open to the media.

Democrats and Republicans alike have closely watched Fetterman's recovery. Democratic hopes to maintain — or even expand — their fragile Senate majority hinge on the party’s ability to capture the seat held by Republican Pat Toomey, who is retiring.

Oz, the celebrity heart surgeon and former host of “The Dr. Oz Show," and Republican groups have tried to raise questions about Fetterman's status, posting a fake “Have You Seen This Person?” poster online that shows Fetterman’s face underneath and says, “Last Seen: 05/13/2022.”

Despite Fetterman's absence, he is ahead of the largely self-funded Oz in fundraising. Fetterman had $5.5 million on hand as of June 30, according to filings with the Federal Election Commission. Oz, who has been endorsed by former President Donald Trump, had $1.1 million on hand.

Fetterman said he walks several miles every day and did not lose any memory as a result of the stroke. In the 20-minute interview with the newspaper, Fetterman used closed-captioning to ensure he did not miss any words, a campaign spokesperson told the Post-Gazette.

Fetterman has been recovering at home but working daily with campaign aides, meeting via video with donors and trolling Oz with viral social media posts emphasizing the doctor's recent move from New Jersey.