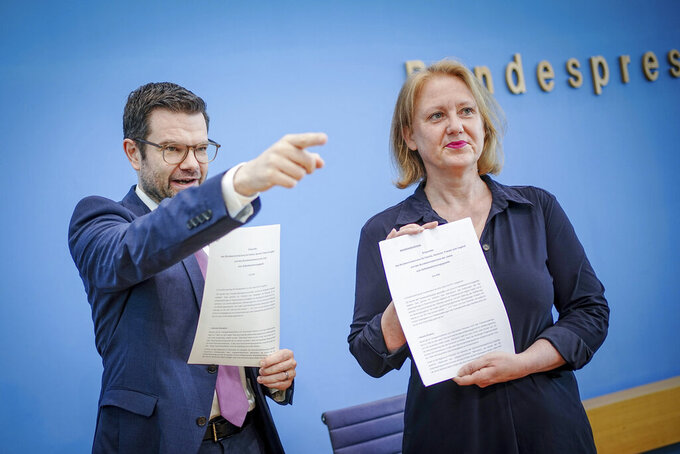 Kay Nietfeld, ASSOCIATED PRESS
Lisa Paus, Federal Minister of Family Affairs, and Marco Buschmann, Federal Minister of Justice, present the key points paper on the Self-Determination Act at the Federal Press Conference in Berlin, Germany, Thursday, June 30, 2022. The law is intended to replace the long-disputed Transsexuals Act of 1980. Among other things, the aim is to reduce the hurdles to changing one's gender. (Kay Nietfeld/dpa via AP)

BERLIN (AP) — The German government on Thursday presented plans to make it easier for transgender people to legally change their name and gender, ending decades-old rules that require them to get expert assessments and a court's authorization.

Under the planned “self-determination law,” adults would be able to change their first name and legal gender at registry offices without further formalities.

The existing “transsexual law,” which took effect in 1981, currently requires individuals to obtain assessments from two experts whose training and experience makes them “sufficiently familiar with the particular problems of transsexualism” and then a court decision to change the gender on official documents.

Over the years, Germany's top court has struck down other provisions that required transgender people to get divorced and sterilized, and to undergo gender-transition surgery.

The existing law “breathes the spirit of the '70s,” Germany's minister for families, Lisa Paus, said. “At the time, the state wanted to help people who were considered psychologically ill, and it set high hurdles for this.”

The current requirements “are not just lengthy and expensive; they are also deeply humiliating, but above all they are completely superfluous,” Paus told reporters in Berlin.

The proposed new rules provide for minors ages 14 and older to change their name and legal gender with approval from their parents or guardians; if they don't agree, teenagers could ask a family court to overrule them.

In the case of children under 14, parents or guardians would have to make registry office applications on their behalf.

Paus said that after a formal change of name and gender is registered, no further changes would be allowed for a year, a provision intended to “ensure the seriousness of the desire to change.” The proposed legislation focuses on individuals' legal identities; it does not involve any revisions to Germany's rules for gender-transition surgery,

The minister said the regulation also would allow fines in cases where information on a person's gender or name change is disclosed without their permission.

The key points of the plan published Thursday also include an unspecified amount of compensation for transgender and intersex people who were “affected by bodily harm or forced divorces under previous legislation.”

“It is time for us to apologize to the affected for this injustice and compensate them,” Paus said.

Justice Minister Marco Buschmann said he's confident that new legislation incorporating the changes will be brought to the Cabinet later this year. It will then require approval by parliament's lower house, in which Chancellor Olaf Scholz's governing coalition of three socially liberal parties has a comfortable majority.

The change is the second in a series of planned liberalizing reforms that Scholz's government has tackled since taking office in December. Last week, lawmakers voted to end a ban on “advertising” abortions that led in the past to doctors being prosecuted for providing information about the procedure to potential patients.

The coalition government aims to produce legislation later this year to legalize the sale of cannabis for recreational purposes. It also wants to ease the path to German citizenship, lift restrictions on dual citizenship and reduce the minimum age for voting in national and European Union elections from 18 to 16.