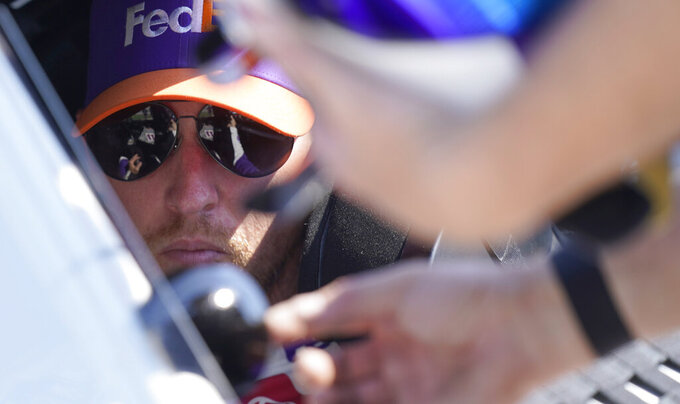 FORT WORTH, Texas (AP) — Christopher Bell has been one of the most consistent drivers in NASCAR’s playoffs this season, and now gets to start the next round close to home.

None of the playoff contenders won any of the three races that opened this postseason, a first for any round since the current format for determining the Cup champion began in 2014. But Bell was the only driver that finished in the top five each of those weeks, while Denny Hamlin, his teammate at Joe Gibbs Racing, was a runner-up twice before a ninth-place finish.

After cutting four drivers from the playoff field, NASCAR opens the round of 12 on Sunday at the 1 1/2-mile Texas Motor Speedway. The Oklahoma native Bell looks at it as his home track, and he finished third there in each of the last two fall races during his first Cup seasons.

“It’s one of my best tracks, so it would have been nice to have it in the round of eight, but hopefully we can capitalize on that and get out of the first race of the round of 12 with a good points day, if not a race win,” said Bell, who is seventh in the standings. “My like of the race track probably comes from my results there.”

Joey Logano, who is second in the standings behind Chase Ellliott, called Texas the most important race for contenders. Talladega Speedway and The Roval at Charlotte Motor Speedway are other two tracks in this round before four more drivers are eliminated from championship consideration.

“This is a week where you’ve just got to look at the max amount of points you can possibly get,” Logano said. “You have a bad race here, then you've got to maybe be more aggressive at Talladega, which ups your chances of wrecking and it just kind of gets a tricky spot. ... This race becomes important because that race is in this round.”

Bell was the only driver who clinched a berth into the second round before last weekend's race at Bristol. His three top-five finishes made him the points leader before the reset for the round of 12. With only one win and four stage wins this year, he had only 13 playoff points to add to the 3,000 each advancing driver got.

“Unfortunately, we weren’t able to cash in on a bunch of bonus points in the regular season, which hinders our chances of getting to the final four. But I think we absolutely have the speed to do it,” Bell said. “I’ve believed all year long that we had speed and potential to do this, and now we’re finally showcasing it.”

The points reset put Chase Elliott, with 40 playoff points through four race wins and five stage wins, back at the top of the standings. Elliott finished last in the 36-car field in the playoff-opening Southern 500 at Darlington because of suspension damage from an early accident, but ended that round with a runner-up finish at Bristol.

Ross Chastain is third in the standings, ahead of defending Cup champion Kyle Larson, William Byron, Hamlin, Bell and Ryan Blaney. Starting below the next cutoff are Chase Briscoe. Alex Bowman, Daniel Suarez and Austin Cindric.

Blaney, who won NASCAR’s All-Star race at Texas four months ago, will have crew chief Jonathan Hassler in the No. 12 pit this weekend after an appeal.

Hassler, jackman Graham Stoddard and rear tire changer Zachary Price all were given a four-race suspension by NASCAR because of a loose tire during last weekend’s race at Bristol. The Penske team appealed the suspension, which allows the three of them to participate at Texas.

Blaney pitted during a caution at Bristol because of a flat right-front tire. But after he pulled away and slowed down because the team realized the left rear wasn’t tight, the tire came off and rolled into another driver’s pit stall.

MAKING UP A DOZEN

Of the 12 drivers still eligible for the Cup title, six are driving Chevrolets. There are also four Fords and the Toyotas of Bell and Hamlin.

Three of the eight active Cup champions are still in contention to win another championship. And they all won in the past four years: Logano in 2018, Elliott in 2020 and Larson last season.

Hendrick Motorsports makes up one-third of the contenders with four: Elliott, Larson, Byron and Bowman. Team Penske makes up one-fourth with its three Fords: Logano, Blaney and Cindric, the only rookie in the final dozen.

Texas has never been so soon in the playoffs, having always been in the round of eight since becoming part of the postseason rotation in 2005. The track was the eighth of the final 10 races until last year, when it moved up to the first race in that round of eight. ... This will be the first race for new TMS general manager Mark Faber, who spent the past 17 years with AEG, including since 2014 in Las Vegas as senior VP of global partnerships at T-Mobile Arena. His more than three decades in the sports industry includes work with the Dallas Cowboys and IndyCar before going to work for AEG in Kansas City in 2005. “I remember coming here for events when I lived here and knowing how iconic of a facility it is,” said Faber, who was at the first NASCAR Cup race there in 1997. ... The forecast Sunday calls for temperatures in the mid-90s, which could be record highs for the day.