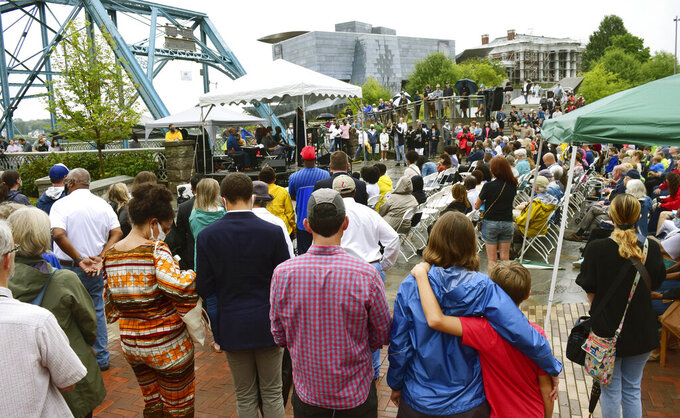 CHATTANOOGA, Tenn. (AP) — More than 115 years after an angry mob lynched Ed Johnson from the Walnut Street Bridge, area residents got their first look Sept. 19 at the memorial to the innocent man and his two courageous attorneys.

As the overcast afternoon brought periods of rain, members of the Ed Johnson Project Committee thanked dozens of people, from politicians to artists and researchers, for their help in bringing Johnson’s story back into the consciousness of the city and into a permanent art piece beside the bridge.

Eric Atkins, vice chair of the committee, said there remain too many walls of injustice and inequity in society that need to be addressed in light of the recognition toward Johnson’s story.

“We have to open up the doors and bring down the barriers and tear down these walls and build bridges, like we see here today,” he said.

Johnson was lynched from the bridge in 1906 after falsely being accused of rape. Despite multiple witnesses testifying to his innocence and a stay of execution delivered from the U.S. Supreme Court, an angry mob broke into the Hamilton County Jail and hanged Johnson from the bridge.

Last Sunday, Chattanooga Mayor Tim Kelly presented a proclamation from the city apologizing to Johnson for the miscarriage of justice he received.

Eddie Glaude Jr., professor of African American studies at Princeton University, said Johnson’s killing worked as a way to consolidate white power and control Black residents. The memorial, he said, presents an opportunity to better understand history, as well as chart a new future for the city.

“It is rare in these trying times that communities come together to recognize a profound wrong. A wrong that haunts,” Glaude said. “Over 100 years later, though it may be, this act to remember Ed Johnson, what happened on that fateful day, helps clear the path for a different way of being together here in Chattanooga.”

The nation is at a turning point with its narrative, with some running away from the facts of history, Glaude said. The truth must be reckoned with, he said.

Jerome Meadows, the visual artist who designed the memorial, unveiled the three statues with the help of Howard High School students. Then a procession from the crowd walked across the Walnut Street Bridge.

The challenge of how to move forward with Johnson’s story was echoed that morning as area faith leaders held a church service in the Maclellan Gym at the University of Tennessee at Chattanooga.

Lakweshia Ewing of New Holy Temple Church of God in Christ told those gathered that the nation needs to address the root causes of injustice.

“We love telling the stories about the purple mountain’s majesty, the democracy and the political justice of this nation,” Ewing said. “But are we as willing to simultaneously talk about the strange fruit hanging from poplar trees in the South? The enslavement, the incarceration, the discrimination, the dehumanization of people of color in this land?”

Chris Sands of Olivet Baptist Church said Johnson was able to face the violent mob and forgive them and reassert his innocence because of his faith in God.

“Because he was able to stand firm, we can stand firm on our convictions,” Sands said. “Because of what he faced, we can face the injustices that’s taking place in our world today. Why? Because we have something to look forward to. We have something to say, you know what, this is not the end of the story.”