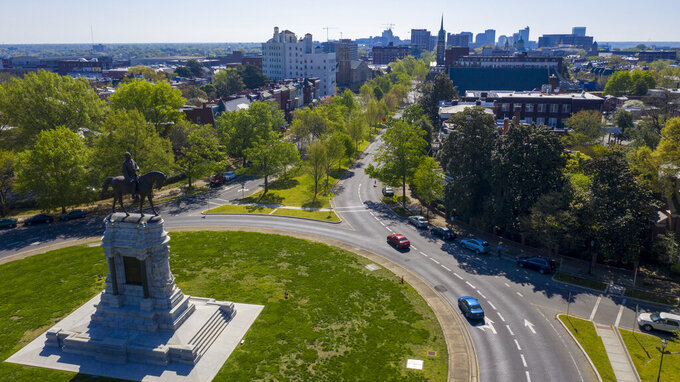 Steve Helber, ASSOCIATED PRESS
FILE - In this April 7, 2020 file photo sparse traffic winds around the statue of Confederate General Robert E. Lee on Monument Ave near downtown Richmond, Va. If a court clears the way for the state of Virginia to take down one of the country's most prominent Confederate statues, contractors will also be removing something else from the enormous monument: a 134-year-old time capsule rumored to contain a valuable and historically significant photo of deceased President Abraham Lincoln. (AP Photo/Steve Helber) 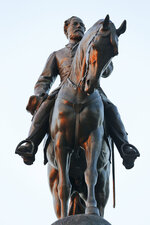 RICHMOND, Va. (AP) — If a court clears the way, the state of Virginia expects to remove not just a soaring statue of Confederate Gen. Robert E. Lee from Richmond’s historic Monument Avenue but also a little-known piece of history tucked inside the massive sculpture’s base: a 134-year-old time capsule.

Historical records and recent imaging tests suggest the presence of the time capsule, which some have speculated might contain a rare, valuable and historically significant photo of deceased President Abraham Lincoln.

“Anyone who has an interest in Civil War history or Richmond history would be very intrigued by this item,” said Dale Brumfield, a local historian and author who has conducted extensive research on the aged copper receptacle and rumored photo.

Gov. Ralph Northam’s office shared details of the time capsule removal project and the state's plans to replace it with a new one with The Associated Press ahead of a formal announcement scheduled for later Tuesday.

The removal work is contingent on the resolution of two still-pending lawsuits seeking to keep the monument in place.

The bronze equestrian statue of Lee was one of five enormous Confederate tributes along Monument Avenue and the only one that belonged to the state. Like many other cities across the South, Richmond removed the figures on its monuments last summer amid nationwide protests against racial injustice and criticism that the statues are symbols of white supremacy that should not occupy public places.

A newspaper article from 1887 suggests that what is inside the Lee monument capsule is mostly memorabilia, including a U.S. silver dollar and a collection of Confederate buttons.

One line from that article has generated buzz, however: a “picture of Lincoln lying in his coffin.” The newspaper identified the donor of that item as “Miss Pattie Leake,” who was a school principal from a prominent local family, according to Brumfield.

Harold Holzer, a historian and Lincoln scholar, said he believes it’s highly doubtful that the picture is an actual photograph of Lincoln in his coffin because the only known photo of Lincoln in death was taken by photographer Jeremiah Gurney in City Hall in New York on April 24, 1865.

More likely, Holzer said, it could be a popular Currier & Ives lithographic print of Lincoln lying in state in New York or a sketch done by an artist who may have witnessed Lincoln’s body during a two-week tour the president’s body was taken on before his burial in Springfield, Illinois.

Brumfield, who wrote about the time capsule and possible Lincoln photo in a 2017 article for Richmond magazine, said he believes the image was included as a reflection of Richmond’s role as the capital of the Confederacy during most of the Civil War.

“I think it just gives a big middle finger to Lincoln, the Union and what it stood for,” Brumfield said.

Brumfield said he found another newspaper article from the same time period that described a cornerstone-laying ceremony on Oct. 27, 1887, attended by about 25,000 people. The article said 60 donated artifacts, including the Lincoln picture, were sealed in the copper box and placed inside the cornerstone.

What kind of shape might the contents of the time capsule be in?

“We have no idea,” said Julie Langan, director of the Department of Historic Resources.

Even if the capsule hasn’t sustained water damage, Langan said paper products from the time would have had a high acid content and would be expected to be extremely fragile. Plans call for law enforcement to take immediate possession of the time capsule and bring it to the state’s conservation lab, where it will be opened in the presence of expert staff ready to triage the objects as needed.

The state's plans also call for replacing the time capsule with a new one to reflect the Virginia of 2021. A website was set up to collect submissions.

The Lee statue, which weighs an estimated 12 tons (11 metric tons) and stands 21 feet tall (6.4 meters) on a pedestal nearly twice that height, became the epicenter of racial injustice protests last summer after the Minneapolis police killing of George Floyd. Northam announced then that he intended to remove the monument, but he has been fighting in court ever since.

For the time being, the governor plans to leave in place the statue's enormous pedestal, now covered with anti-police and anti-racism graffiti. Some racial justice advocates see it as a symbol of the protest movement that erupted after Floyd’s killing and don't want it moved.

Richmond officials, meanwhile, are advancing plans to remove the pedestals and other remnants of the four other Monument Avenue tributes and at least temporarily pave over or relandscape the sites. Northam has tapped the Virginia Museum of Fine Arts to lead a community-driven redesign process for the whole of Monument Avenue, but that process is expected to be a long one and is not yet underway.

The nation's current reckoning with racial injustice, sparked by the death of Floyd and other Black men at the hands of police, has remade the public history landscape in many Southern cities. Officials in the city of Charlottesville, Virginia, recently voted unanimously to remove two statues of Confederate generals, including one that was the focus of a violent white nationalist rally in 2017.

In Tennessee, officials have decided to relocate the remains of Confederate army general, former slave trader and early Ku Klux Klan leader Nathan Bedford Forrest from a downtown park in Memphis to a Confederate museum in the city of Columbia. Georgia and other states have relocated monuments as well.

Richmond’s proposal to remove the pedestals of its former Confederate monuments has been welcomed by some who say every piece of the monuments represents a tribute to white supremacy that should be wiped away. But others, including many speakers in a contentious, lengthy public meeting Monday, have voiced concerns about dismantling heavy, valuable and, in some cases, artistically significant pieces.

“If we pretend that this didn’t happen, that these statues weren’t there by repaving over the scar, we are walking away and sweeping this under the rug," said Sarah Shields Driggs, a Richmond resident and architectural historian who co-authored a book about Monument Avenue. "If we leave the pedestals there, even if just for a few years, we have the opportunity to reimagine, to readdress and possibly to start to correct our mistakes.”